A Day Escape to Unexpected Qatif

Qatif — You never know when an adventure can start. Some time ago, my husband and I were invited to a friend’s home, and as we had no time to research our day trip destination, we were surprised by the people, the city, and its fascinating past. Welcome to unexpected Qatif.

Only 30 minutes from Dammam, Qatif is a real oasis area. Trees abound, and lush, green vegetation can even be seen from the highway. Its rich agricultural soil produces rice, fruits, and vegetables. Agriculture has long been part of the landscape and livelihoods of families here. 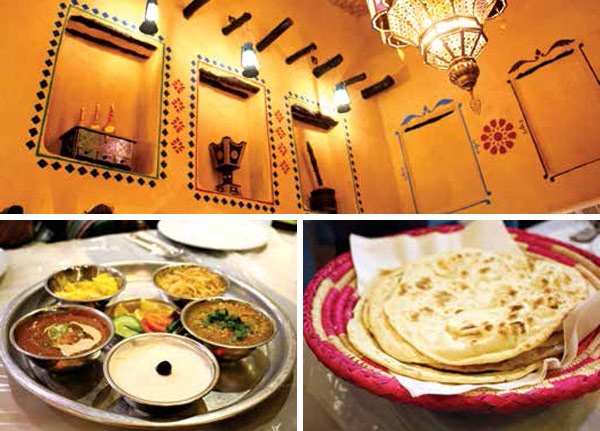 The breakfast was huge, with a big tray of hot bread and a variety of other morning treats,
while the restaurant featured a variety of traditional art elements along the walls.

After breakfast, it was time to enjoy the sights, sounds, and smells of the Thursday market, which is now held on Saturdays.
The market features all kinds of people and goods, including fresh fruits and vegetables, dried fruit, spices, folk handcrafts
such as baskets and pottery, fresh fish, birds, clothes, antiques, and much more.

It was still early in the morning when we were invited to a traditional restaurant for a typical breakfast. Colored tapestry and big cushions greeted us, with single family rooms available upstairs, and light blue sofas downstairs. We were immersed in an ancient scenario, able to relive the daily chores of the past and see many of the antique collectible objects on display.

The breakfast was huge, with a big tray of tasty lentils, falafel, shakshuks (scrambled eggs with tomatoes and spices), and labneh — all served with hot, fresh bread. The tea with black dried lemon, kept warm by the candles under traditional teapots, also hit the spot.

From there, we proceeded to the traditional weekly souq known as the “Thursday Market,” which now takes place on Saturday — a remnant of the former calendar in the Kingdom.

Qatif bustles with transactions from early morning onward, with street vendors roaming the area and a wide range of goods available, including fresh fruits and vegetables, dried fruit, spices, folk handcrafts such as baskets and pottery, fresh fish, birds, clothes, antiques, and much more. The display of birds startled us, as it was strange to our eyes to see traders selling wild raptors.

The traditional architecture, carrying through the ages, still holds firm on the Qatif skyline, from the old castle (left), the old buildings (center) and Abu Loza’s Bath (right), which is believed to have been in business since the 3rd century. Today, Abu Loza’s Bath is under the supervision of the Saudi Commission for Tourism and National Heritage as it struggles with potential deterioration and depletion of water.

A Break for a Bath

Next up, we traveled to Abu Loza’s Bath, a historic Turkish bath. Outside, a visible dome evokes the style of a traditional hammam. The bath features sulfur mineral spring water, and although the exact origin of the establishment is unknown, it is considered to date back to the 3rd century.

The hammam takes the name from the water spring Ain Abu Loza, where people used the water to cure skin diseases and knuckle pains. The water spring was dug by the Canaanites, and the majority of the customers who used the bath were pearl hunters and people living in the Qatif Castle, who were mostly traders.

Today, the hammam is under the supervision of the Saudi Commission for Tourism and National Heritage, but it struggles with potential deterioration and depletion of water. Inside there are two sections divided — one reserved for men, who were able to sit around the big well where the water came up, and the other squared room dedicated to women only. It was connected through a small canal to the well to let the water come in. 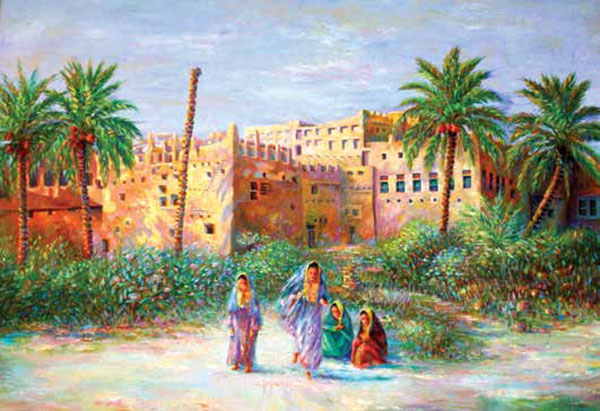 Works such as this by Qatif artist Muneer Al-Hejji have helped popularize Saudi culture.

The Art of Qatif

The welcoming bath keeper shared with us old, faded photos of Qatif, hearkening back to a time when the community was a much livelier center of action, full of beautiful mud and clay brick buildings where much of the trade took place.

The bath keeper also led us to a private art exhibition done by his brother, a place that left us astonished. We were honored to meet Muneer Al-Hejji, a local and internationally recognized artist who has popularized Saudi culture through his work. He grew up with his family in the old area of Al-Qatif Castle on the shores of the Arabian Gulf. The doors, windows, walls, and architectural features of the building around the town were carved using traditional Arabesque designs. In fact, Al-Hejji preserves a collection of amazing pieces that belonged to his family in the past.

Being surrounded by this Islamic aesthetic and symbolism, a deep emotional attachment was cultivated. These vivid images and emotions would later prove to be a great source of inspiration for Al-Hejji, as some of his art pieces portray his roots in the landscapes and his heritage through different colors, materials, and motifs.

Even though he slowly moved to abstracts, he has created many amazing works of art. I suggest to have a virtual tour of the local area through the artist’s eyes. You will be able to imagine the place and the people that lived there. Before leaving, Al-Hejji showed us his biggest, most colorful painting where he illustrates the start of the pilgrimage season.

In the month before Hajj, the kids get a basket made of palm tree fronds filled with seeds. They sing a song about going to Makkah — hopefully the following year. Parents leave their children behind at home while they do their pilgrimage, and the children get so excited to see them returning home. The children throw their baskets into the sea to make a wish.

Eventually, we arrived at Tarut Island through one of the two causeways that connect it to Qatif. The small isle is composed of many villages (including Dareen, Al Zoor, Al Rabieia, and Al Deyrah) and is considered one of the most ancient sites that were inhabited by humans. It is also one of the oldest areas along the Arabian Peninsula, as the island played a significant role in trade activity for the entire Arabian Gulf region. It was a central trading point between Mesopotamia and along the coastal areas in the east of the Arabian Peninsula.

Its strong relationships with many of the urbanized areas along the region were well-known. Archaeological finds indicate that the island has been inhabited since 5,000 B.C., and it was later home to people from the civilization of Dilmun, Akkadians, Assyrians, and Persians. Even later, it was under the control of the Persian Empire and the Islamic Empire, was colonized by the Portuguese, and made part of the Ottoman Empire.

Located at the top of a hill, Tarut Castle has an oval-shaped irregular inner plan that covers a total area of no more than 600 square meters, surrounded by a wide wall constructed with sea mud, gypsum, and Fourosh rocks. It is surprising to notice many recognizable shells in this mixture.

It had four towers in total, but one was destroyed during a battle. There used to be a spring beside the castle called “Ayyin Aloudda” (the big spring), which was the main source of water for the castle. In its courtyard is a rectangle with a central deep well, which is believed to have been used to store provisions during the times of attack.

Regardless, they were forced to hand it over in 1559 and withdrew from Tarut Island to Awal Island (now a part of Bahrain). Tarut Castle was built on ancient ruins from the rise of the Dilmun civilization. 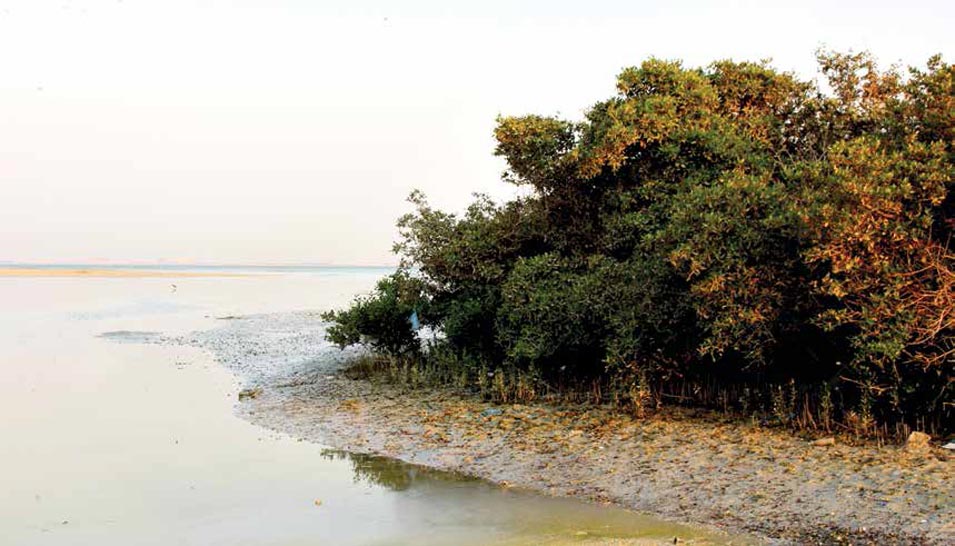 It was a pleasure to get lost in narrow streets in the middle of the old city of Tarut, with its heritage buildings and traditional houses. We enjoyed a lunch of fresh grilled fish, and later traveled across the bay to view a beautiful mangrove forest.

Mangroves are commonly known as salt tolerant trees and adapt to life in harsh coastal conditions such as those found in Tarut. This area has many creeks and backwaters with mangrove swamps and several salt marshes.

I could have stayed there for a long time watching the birds drinking in the waters around the island, their reflections captured by the play of lights dashing on the surface of the blue waters. At day’s end, we walked along the sea front next to the port, full of old wooden boats used for fishing

Children played on the lawns, an overflowing horse-drawn cart brought by a group of people as the music of a nearby ice cream truck sang out to the children to come and enjoy a treat.

Visitors to the port are taken by these eyes painted in graffiti style on a bench while taking in the beauty of the bay.

Sitting down on a bench set up in the direction of the port, we were taken by eyes painted in graffiti style on the bench as we joined them in looking out at the bay, thinking about how much the glorious past of the city we managed to feel now was a part of us.