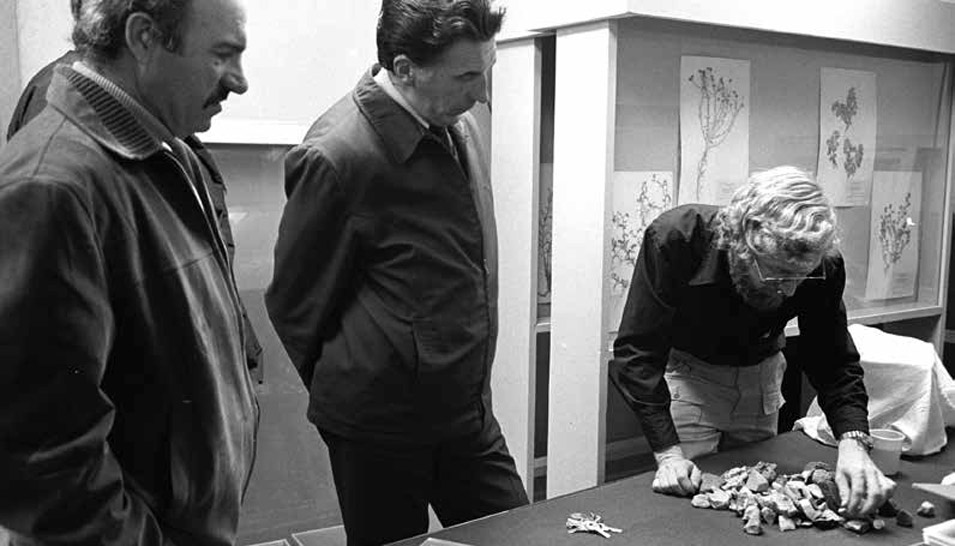 From the earliest years of oil and gas exploration work in Saudi Arabia, many of the company’s employees and their families have demonstrated a keen interest in the culture, history, archaeology and natural history of the Arabian Peninsula. This interest has continued to find an outlet in the Arabian Natural History Association, this year celebrating its 50th anniversary as a self-directed group. 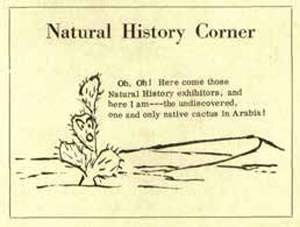 Since the 1940s, the company has employed a team of anthropologists, linguists, and cultural experts to help gather and preserve information about the history of the Kingdom and its people, publishing some of their findings in early editions of the Aramco Employee Handbook.

Following the success of the company’s mobile tent-based oil exhibits — which annually toured Saudi Arabia and attracted large crowds — a permanent Oil Exhibit Center was opened in Dhahran in 1963 to receive the growing number of visitors to the company’s headquarters. Initially housed in the rear of the present Dhahran Dining Hall, its exhibits educated guests about the achievements of the company and the Kingdom.

Saudi Aramco’s first Oil Exhibit Center was opened in 1963 at the rear of the Dhahran Dining Hall.
ANHA was tasked with providing natural history displays for the exhibit.

The Birth of ANHA

On July 11, 1966, a special meeting was held in the Oil Exhibit Center Conference Room. Its purpose was “to establish and maintain an Arabian natural history exhibit for the educational benefit and pleasure of Aramco’s employees and families, service organizations, and the general public.”

That evening, the Arabian Natural History Association (ANHA) was created to offer a scientific platform for the sharing of data and its members took responsibility for developing and maintaining natural history displays in the first Oil Exhibit, the company library and the Administration Building.

They quickly canvassed the three Saudi Aramco communities for material that might be suitable for display. The employees and their dependents were further encouraged by a meeting in November 1966 where the topic discussed was “Field Collecting Methods of Natural History Specimens.” The company’s weekend desert travelers did not disappoint, donating or loaning an interesting array of specimens for the specialists to identify and categorize.

It proved a much longer process to actually collate the objects, and it was a year before the group called for volunteers to help organize the display cases. Eventually, however, the natural history exhibit opened to the public in the Oil Exhibit Theater. ANHA members hoped the exhibit would support their goal to “promote the conservation of the living natural resources of Arabia by supporting conservation measures and by increasing public interest in Arabia’s natural heritage.” Local school groups flocked to enjoy the educational opportunity, and ANHA now required the position of curator on its board.

When development work proceeded on a new Oil Exhibit in 1972, the association’s natural history display cases were moved to other venues, including the Dhahran Dining Hall Lobby (a collection of mounted birds, including sawbills, hoopoe, and bee-eaters), the Administration Building (petrified wood, rocks, minerals, fossils, and material from the al-Hadidah meteor) and the Recreation Library (over 100 varieties of shells, mostly collected from the Ras Tanura area). All this activity meant the ANHA workshop in Building 1814 was kept busy, and in 1975, it was opened to the public for a series of workshops designed to encourage its use by local residents seeking to further their interest in natural history.

Drawing on the expertise and interests of its members, the association also held open meetings featuring lectures by visiting naturalists, programs on collecting techniques and discussions about groups of organisms of local importance. Field activities were regularly on offer, including botanical and geological collecting trips, outdoor astronomy sessions, and exchange visits with other regional natural history groups. Popular contributors to the program included Fuad Saleh (insects), Abdallah S. Jum’ah (the pearling industry), Jaber Jum’ah (weather and astronomy), and Rami Kamal (heritage and geology).

More recently, longtime ANHA president David Tschanz added greatly to the body of knowledge of the Peninsula’s Nabatean heritage, also writing prolifically on other areas of history and regional culture for The Arabian Sun and other publications.

An ANHA newsletter was started in the summer of 1971, providing a forum for members to publish findings of local interest, including pieces featuring archaeology and culture. A monthly members newsletter, Makzan, continues today with content of regional relevance.

From early 1972, work also began on an ANHA aquarium. To stock this, help was provided by the Dhahran Divers’ Club, which helped capture local species such as the green-headed wrasse and grunt for display.

Over the years, ANHA groups have toured Jordan, Lebanon, Oman, Yemen, Ethiopia, and many important sites within Saudi Arabia. As it celebrates its 50th anniversary, the group continues to provide a platform of fascinating quality monthly speakers, with the range of topics for 2016 alone including “Mysterious Archaeological Structures of Saudi Arabia,” an examination of “The Kingdom’s Bio-Diversity,” the “Silk Roads of Uzbekistan,” and the “Extraordinary Lives of Saudi Arabia’s Birds.”