Arabian Honey: The Best of the Best

Honey found in nature comes in a dizzying variety of types and shades of flavor. In the United States alone, more than 300 unique types of honey are found. A distinguishing factor in their differences is the floral source involved. On average, one in sixty species of flowering plants produces honey, and not all of those honey types are of equal interest to bees, whose fickle, discriminating tastes in such matters are the stuff of legend. Red clover and milkweed score high among most bees in side-by-side taste tests in the United States against other contenders.

Saudi is home to an estimated 2,200 flowering plants with members of genus Acacia topping the list of favorites on the Arabian honey bee’s dinner menu. Bee cultivation in Arabia dates back at least as far as the dawn of the Common Era. Writers from that time describing Arabia Felix often refer to it as a land of honey. The Qur’an mentions bees and beekeeping often and refers to the uses of honey for medicinal purposes. Samples of honey harvested by humans have been found in Egyptian tombs over 4,000 years old. It’s even claimed that ancient honey like that never spoils and remains edible to this day. One story often cited in support of that claim involves King Tut’s tomb, where a jar of perfectly preserved honey was found among his treasures.

If you look hard enough in any corner of the world where honey is found, you’ll find a local booster who touts his or her region’s honey as the best in the world. Ultimately, true credit must go to the flowering plants of the region in question and to the environment in which they grew.

On a trip to the Halkidiki region of northern Greece 10 years ago, I kept noticing signs in Greek reading “μέλισσα.” I knew enough about the Greek alphabet to translate those letters into English as “Melissa,” a common girl’s name back home in the U.S. Curious as to who this mysterious Melissa was and why she was so popular, I finally asked a Greek friend. He looked at me funny, paused for a moment, smiled, and finally answered, “Melissa is the Greek word for bee or honey. We have the best honey in the world. You should try it sometime. Look, there’s a sign. Let’s stop. You’re going to love it.”

Embarrassed by my unguarded display of ignorance, I nonetheless took him up on his suggestion and tried the golden-brown nectar being offered at the roadside stand run, as it turned out, by a local bee farmer (or “apiarist” to get technical). Much to my surprise, I discovered that Anastasios had a legitimate argument to make in his favor. That honey was delicious. If not the tastiest in the world, it was certainly unique to my taste buds, which cast their vote by demanding more. 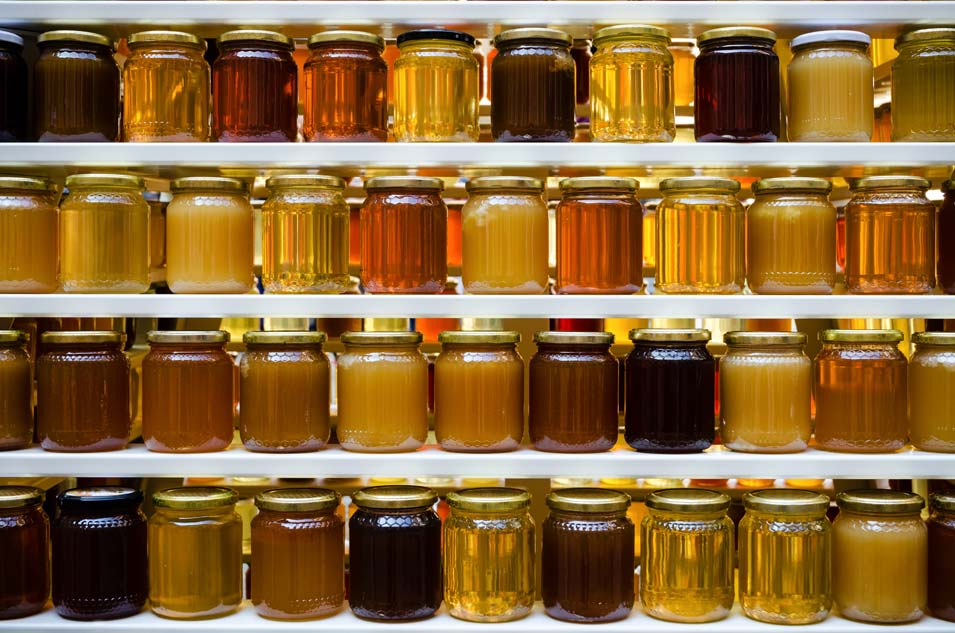 Arabian honey has its own ardent cadre of supporters, among them tens of thousands of Bee-eaters migrating through the Kingdom every year, feasting on local bee populations fattened by their incessant raids on native honey-producing flora. The deeper I delved into the world of bees in Arabia, the more I learned and the more amazed I became. The factors influencing the flavor and character of Arabian honey are many. They begin with the nectar-producing plants themselves. The plants produce the honey, while the bees harvest it. Occasional AXP contributor Brid Beeler of Brid Beeler Travel offered these words about bees and honey in Arabia:

I remember when I first encountered bees in Saudi. Their homes consisted of crudely assembled wooden hives sitting on spindly wooden legs in the midst of the desert sands. It seemed so odd and strange to me. The gentleman with me at that moment was on a mission, driving down dirt tracks with the dust rising behind us as we madly sped along. Finally, we reached our destination.

As I watched from the Landcruiser, a Bedouin emerged from his tiny shelter and walked over to the wooden contraptions. Honey was taken from the comb and scraped with a jambiya (the traditional Arabian dagger) into a discarded plastic water bottle. We were able to purchase this small amount for a whopping $80 U.S. and judged ourselves lucky at that. Small plastic jerry cans holding a liter of honey would have cost us $150 U.S. For that same amount I could have purchased 15 or more kilos of “natural raw honey” at any Sainsbury’s back home. I was astonished that honey could cost that kind of money. I’d never heard of such a thing. But my interest was piqued and in the following years I spent living on the Peninsula, my appreciation of Arabian honey grew and grew, despite its considerable cost.

I grew up not liking honey, finding it thick and gooey, too treacle-like with a rather plastic-y, burnt taste. Honey from the Arabian Peninsula is devoid of sugar, unlike most other places in the world where bees are fed a mixture of sugar and water, which changes the flavor of the raw honey. Most beekeepers outside of Arabia will deny doing this. But in order to stretch raw honey, watering it down like this is almost a necessity. Few bee farmers can afford to operate a business with the kind of prices charged for honey in the Kingdom. As a result, outside of Arabia, few beekeepers can honestly say that their honey is truly raw and authentic, devoid of all forms of chemicals.

One must remember that where honey is harvested in western societies, bees fly around and collect nectar off plants that may have been sprayed with chemicals for weeds in the surrounding soils and fields. The major difference with Middle Eastern honey is that there is no farming in the desert. Bees are kept in the desert and mountains where nature can be found in its purest form. The flowers growing there are wild. Nobody sprays for weeds among the rocky mountainous plains, nor do they spray wildflowers in the desert. When you taste honey of this quality, you will immediately recognize the difference. A little bit of Arabian honey goes a long, long way.

Honey has been an essential part of the Middle Eastern diet for centuries and is used as a cure for all sorts of ailments, for general health reasons, and as an accompaniment to many foods. If you wish to give a gift to a family or individual during Ramadan for the nightly Iftars (breaking of the fast after fasting from sunrise to sunset), there is no greater gift than that of honey.

Given its remarkable qualities, we must add Arabian honey to our growing list of distinctive every-day components of life in the Kingdom. Saudi beekeepers can proudly proclaim their honey the best in the world, and anyone who argues to the contrary needs to do his or her homework and actually taste the premium-priced natural honey from the Peninsula’s deserts Beeler describes. Only then will their opinion count.