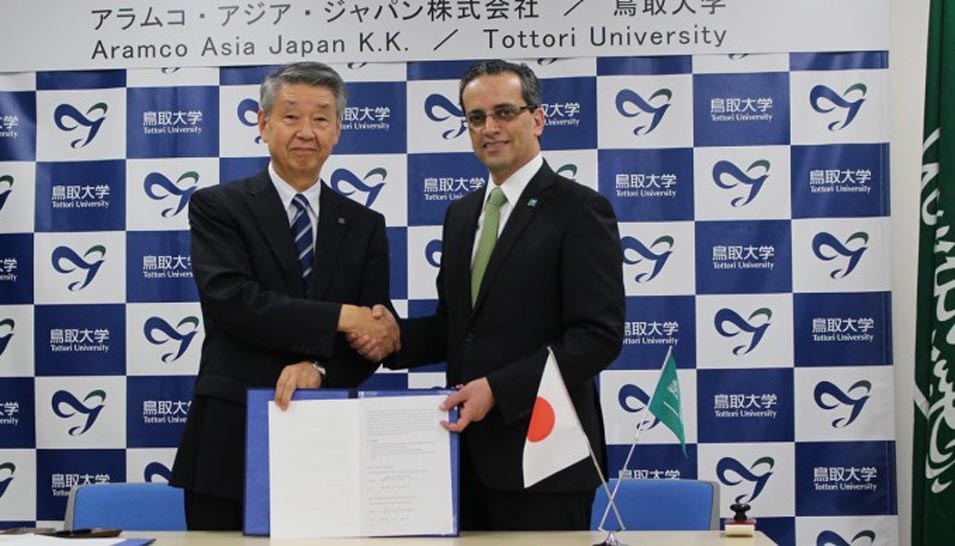 The collaboration is in recognition of achievements of ALRC's in the field of dryland studies and scientific development covering different regions around the world.

Aramco, as a part of its Community Social Responsibility initiatives, will be supporting ALRC’s research, information dissemination and capacity building in fields of integrated desertification control, environmental protection, and agricultural production. Both parties are also looking into working together to promote an international network and cooperation among researchers that include possible collaboration with Saudi Aramco’s Environmental Protection Department.

At the signing ceremony, Alkhunaini touched upon Saudi Aramco’s long history of efforts to effectively manage sand and protect desert animals such as the endangered oryx: “I hope not only Japan, but also other countries in the world with drylands, and furthermore, Saudi Arabia, can benefit from this new bridge built now, connecting Aramco and the center.”, he said.

More than 30 sand dunes are nestled along the shoreline of Japan. The sand dune in Tottori, where the institute is located, spreads 16 kilometers from east to west and 2.4 kilometers from south to north. The dune was formed by sand carried by wind and sea waves from the mountains to the sea by river and deposited along the coast.

As a part of Japan’s agricultural development in sand dunes, scientific projects to tackle the two major issues — sand drifting and irrigation — started back in the early 20th century at an organizational level, and then progressed gradually to the current ALRC. In view of the growing global desertification concerns, the center later shifted and expanded its scope to research of arid lands on a global basis.

“We are very honored and excited to be recognized. This undertaking will help galvanize the exchange between two entities with a shared mission, namely studies of dryland,” said Ryota Teshima, president of Tottori University.