AramcoExPats.Com Turns 15 with A Smile

AramcoExpats.com, which is celebrating its 15th birthday this year, was an unexpected child.

“I always had an interest in publishing, but never imagined I would end up in this field,” said Vicci Turner, who cofounded the digital publication for Aramcons past and present, and potential new employees, with her son Rusty Swayne in 2002. “Life is full of surprises!”

AramcoExpats.com, based in Bellingham, Wash., is truly a family operation.

Swayne’s wife Kara, whom he married a few years after AramcoExpats.com started up, worked part-time as a writer and editor for the website. This year, she undertook content management, assisted by an outside contractor. Turner continues to help with content acquisition and is responsible for advertising and business operations for what’s become a major undertaking.

AramcoExpats.com has grown into “a massive website with an archive holding over 2,300 articles, a gallery featuring over 18,000 photos and an in-house PR service that has published over 5,000 ‘Events’ and ‘Travel Club’ announcements,” Turner said in July. “Aramco ExPats Forum alone has averaged 2,250 page views daily in the past 12 months.” The forum enables users to join in chat sessions on various topics. 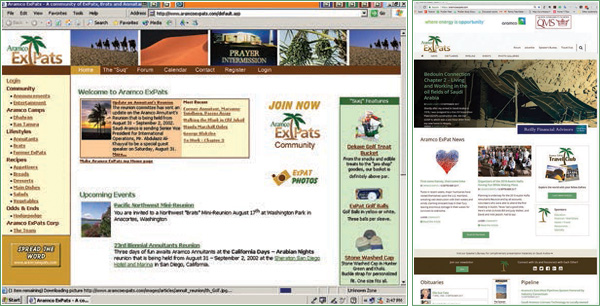 Old (left) and New (right): AramcoExpats.com has undergone a remarkable evolution in 15 years.

Just over half the website’s readers are in the United States, followed by Saudi Arabia (14 percent), England (six percent), Canada (five percent), Pakistan (three percent) and India (two percent), with the remainder sprinkled around the world. It has a total of more than 25,000 Facebook and Twitter followers and 1,800 LinkedIn connections.

Turner taught school in Abqaiq and ’Udhailiyah and then worked as a planning-and-programs analyst in several departments, giving her a good overview of Saudi Aramco and all four of its communities.

Her son Rusty grew up in the kingdom, as did his brother Brad. Rusty graduated from Washington State University with a degree in civil engineering. While working as an engineer he continued his education in computer science, which has proved critical for the website’s success.

“We could not run AramcoExpats without the active involvement of a programmer with Rusty’s knowledge, experience and skill set,” Turner said. “He does all website development and maintenance for the site,” which is in its sixth generation.

“It continues to amaze me how much our readers enjoy visiting our website every week,” Turner noted. “Our readers write us and let us know how much they appreciate us helping to keep everyone informed and linked together.”

The website has been the doorway to many “adventures,” Turner said. “One of the greatest…was finding the ‘children’ who attended the king’s visit [to Dhahran] in 1947” with their mothers, and then attending Saudi Aramco’s 75th-anniversary celebration with them in 2008. She has also accompanied teachers to Saudi Arabia.

Another plus of running the site is that many of the authors of the articles it has published turned into friends, Turner says.

They have included the late retiree Nestor Sander, a geologist who arrived in Saudi Arabia in the late 1930s, and Dhahran poet Nimah Nawwab. Turner’s “No. 1 favorite author” is Tim Barger, the son of the late Aramco President and CEO Tom Barger, who has supplied “many wonderful stories and … boundless encouragement.”

AramcoExpats.com has changed significantly over the years. “The hours required to turn out a weekly newsletter and keep the website updated have increased 10-fold!” Turner noted.

Despite that, “I would do it again,” she said. “The website has introduced me to a multitude of friends and acquaintances and opened so many fascinating avenues of interest that I would never have otherwise experienced.”