Bushkuhls Retire After 26 Years with the Company 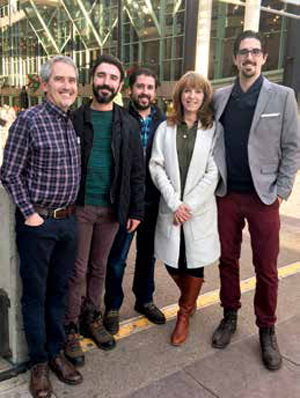 Stephen Bushkuhl, left, met his wife, Katrina,
when the two were college students visiting
their parents in ‘Udhailiyah in 1980. After
26 years of service with the company, he will
be retiring from the company on May 31.
Also pictured are Harrison, Shelby, and Grant
Bushkuhl, who all attended and graduated
from Saudi Aramco schools.

After 26 years of service with Saudi Aramco, in two separate stints, Stephen J. Bushkuhl will retire May 31 as manager of the Downstream Planning and Performance Management Department (P&PMD).

Bushkuhl graduated with a degree in chemical engineering from the University of Arkansas in Fayetteville.

Both Bushkuhl and his wife, Katrina, have long experiences of living abroad. Her childhood was spent living in military bases, with her family’s first posting in Berlin in 1963. Bushkuhl himself lived more than half of his life outside of the U.S, having followed his parents to postings in Venezuela, Libya, and Italy, starting in 1969.

Bushkuhl’s first experience of Aramco came in 1980, when his father took a job in ’Udhailiyah. Bushkuhl stayed in the U.S. to complete his college degree, but he visited his family during the winter of 1980 and the summer of 1981. And that is where Bushkuhl met another returning student, Katrina. They married soon after.

“My wife and I are both second-generation Aramcons. We didn’t have the privilege of being ‘brats’ but we were returning students in 1980-81 in ’Udhailiyah. My wife and I met in ’Udhailiyah during the winter of 1980 and summer of 1981,” he said.

Bushkuhl left Saudi Aramco briefly in 1995 to rejoin Exxon, but returned to Saudi Aramco in 1998 and worked in a variety of supervisory positions in the Process and Control Systems Department and Research and Development Center, before serving as assistant to the senior vice president of Downstream and as manager of P&PMD.

Katrina worked for the company as well, as a teacher’s aide in the Dhahran Hills School and the Dhahran K-4 program.

Active in the Community

Their three sons all grew up in Dhahran, and graduated from Saudi Aramco schools. Now, all three live and work in Denver. Harrison is currently studying urban planning, Grant is a chef, and Shelby is a flight dispatcher.

In Dhahran, the Bushkuhls were active in various community organizations, with Bushkuhl serving as assistant leader of a Dhahran Boy Scouts troop, and treasurer of the Dhahran Flag Football League. The family took full advantage of their time in the Kingdom to travel and explore Saudi Arabia, taking numerous camping trips.

“One of the most memorable experiences here in the Kingdom was a weeklong camping trip that crossed the Kingdom to visit Madain Salih and drive the Hijaz Railway,” Bushkuhl said. “We were one of 14 vehicles and over 50 people that made the trip — a collective bonding experience as we crossed thousands of kilometers and camped in various locations across the Kingdom.”

In retirement, he plans to travel throughout the U.K. during the month of June, revisiting favorite haunts while expanding the family’s reach to the West Coast of the U.K. Once he settles in their new home in Colorado, Bushkuhl plans to engage in executive coaching and mentoring for owners and leaders of small- and medium-enterprises in the Colorado Front Range area. He and Katrina will also pursue hobbies, such as hiking, reading, travel, teaching, and benevolent activities.

The family plans to make their home in Monument, Colo., and can be contacted by emailing [email protected]