Camping with Camels: My Introduction to the Kingdom - Part I

This year marks the 31st anniversary of my first setting foot in Saudi Arabia. Back then, it was still a sleepy, laid back place with little in the way of entertainment or amenities. So, as expats, we made our own entertainment and, for those of us with a penchant for the outdoors, the deserts of Arabia became our playground - and what a playground it was! Ask yourself, where else could you camp under millions of stars twinkling like diamonds in the midnight black sky. It was immense and simply magical. Montana is often referred to as ‘Big Sky Country,’ well, Saudi Arabia’s desert night sky, devoid of pollution, is exactly that on a monumental scale. The sky seems to go on forever.

Thirty-one years ago, Saudi Arabia was not exactly a highlight on most people’s travel radar, not that you could visit anyway unless you had a legitimate reason for going. Against all my better instincts telling me not to go, love won out and as a new bride I agreed that I would go for the remaining 18 months of my husband’s contract in the Kingdom.

Back then, Riyadh was not much more than a big village. It took only 10 or 15 minutes maximum to get anywhere and Sulamaniya/Olaya was the heart of town. Ours was an idyllic lifestyle in an oasis of calm, living for the next great adventure on the map to explore.

That adventure came rapidly on the heels of my arrival in Kingdom. In less than two weeks the Ramadan Eid celebrations began, marking the end of the 30 day fast when everyone celebrates. Families and friends visit each other, children are dressed in their new clothing for the occasion and money is gifted to children. One of the perks of our government job was that, as foreigners we were entitled to both the Islamic holidays AND western holidays. Thus, expats as well as Saudis traveled abroad at every opportunity which presented itself. But, having just been in Egypt cruising the Nile in the style of Agatha Christie with only 40 other passengers along with as many staff, it was apparent that another international trip was simply not on the cards. But a planned trip in Kingdom was already on the cards before my arrival. 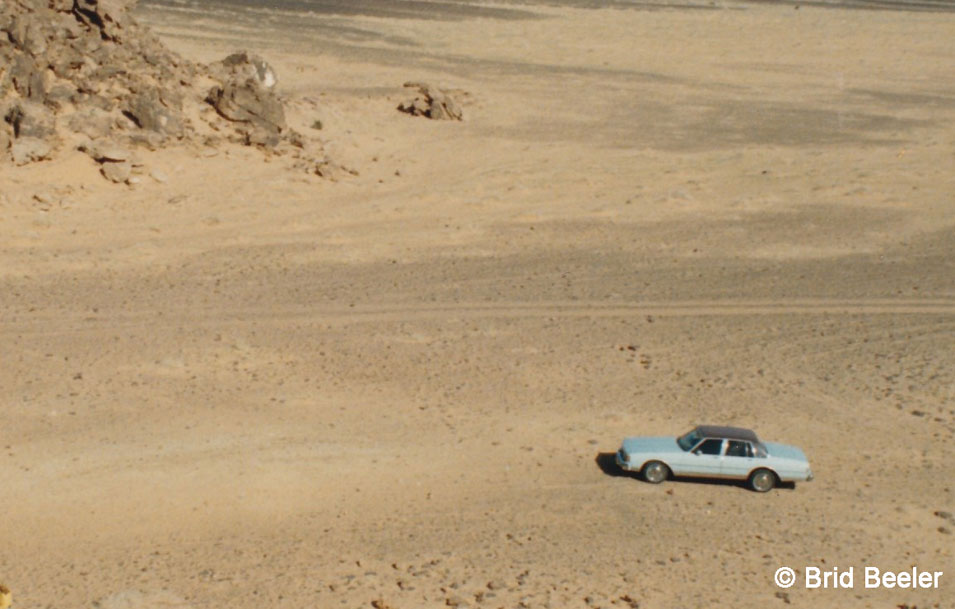 Our Chevy Caprice in the Desert.
© Brid Beeler. All rights reserved.

Saudi Arabia is the size of the United States, east of the Mississippi River, so the plan was that, together along with some of my husband’s friends whom I had only just met, we would go on a camping trip for two weeks driving in our ‘company’ Chevy Caprice sedans. I nicknamed those Chevy’s ‘Yank Tanks.’ They were the most unlikely desert vehicles, but they took us everywhere, down wadis, across the hard desert floors, and they never ceased to amaze us with how they kept on going. Everyone we knew drove a Chevy Caprice and every Saudi wanted to own one in those days.

The day of departure finally rolled around, and we left Riyadh around 3:00pm in the afternoon, heading north towards Buraidah. Now, let me just say, if there are mosquitos within 20 miles of me, they will seek me out in their droves. When I mentioned this, everyone laughed, saying, mosquitoes would not be a problem in the desert. 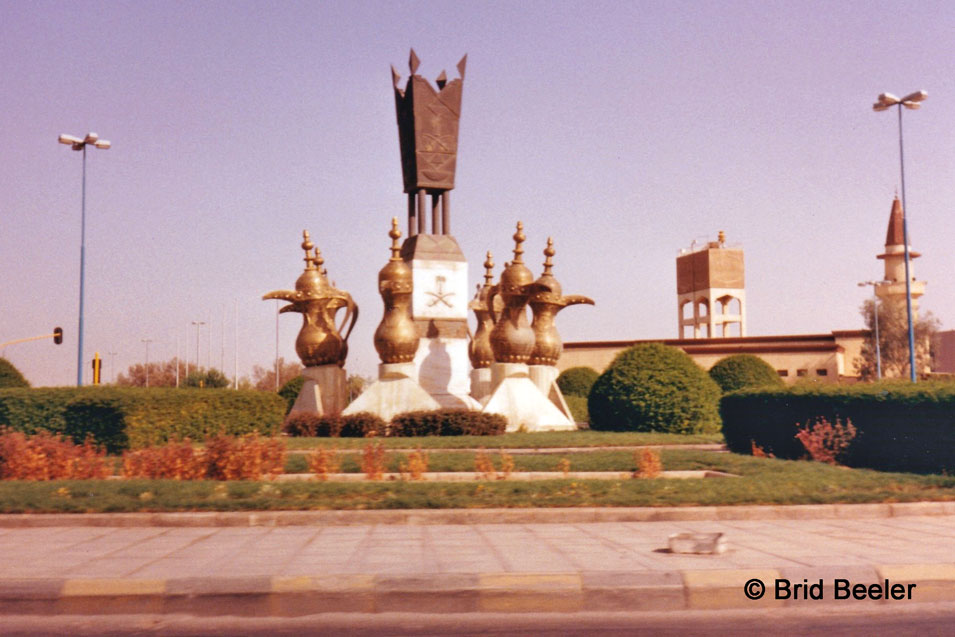 Trying to find a camping site on the first night in the dark proved not an easy task, particularly when we wanted to get off road, away from any village lights or Bedouin encampment as this would just invite visitors to the camp, resulting in an all-night affair sitting around a campfire, drinking coffee and chatting. Saudis are extremely social and a guest is a guest and they would come to invite you to their home, particularly in the case of women who should not be out in the desert camping, they should be in comfort and indoors and cared for by the Saudi wives and their families. It was different for men. This was simply tradition. So, when Saudi men would come to camp, we western women would keep a low profile so as not to attract attention.

We ended up camping, as we discovered next morning, in an area of irrigated wheat fields. This was the period when wheat was grown in the Kingdom and Saudi was the second largest exporter of wheat in the world, after the Soviet Union. But the water, attracted mosquitoes and incessant buzzing of these horrid creatures ensured that none of us got any sleep. The other woman in our group emerged from her tent with a swollen eye that looked like she had just emerged from the ring with Mike Tyson. It was a bruiser and, even two weeks on, her eye was still swollen from the mosquito frenzy encountered that first night of our camping trip. I had my share of bites too, but miraculously had been spared the worst of it.