Celebrating the Spirit of Ramadan - CEO: "Biggest Strength of Aramco is Our People"

Saudi Aramco’s biggest strength that makes it the global oil and gas industry leader is the quality of its workforce, president and CEO Amin Nasser said during his visits to the company’s facilities during Ramadan. Nasser specifically emphasized this point when addressing employees at Marjan, Khursaniyah, Riyadh, Yanbu’, ‘Udhailiyah, Abqaiq, and Ras Tanura.

“Our top line performance wouldn’t be possible without our hardworking people in the fields and plants across the Kingdom,” Nasser said. He also provided corporate strategy updates to employees as the company pursues its growth agenda in downstream and gas, and he highlighted areas of priority for Saudi Aramco to stay competitive.

President and CEO Amin Nasser speaks with Abqaiq Plants employees during a recent senior management visit to company facilities during the month of Ramadan. Nasser thanked employees for their hard work and dedication, and urged them to maintain safe practices both at work, on the road, and at home. Vice president of Southern Area Oil Operations Khaled A. Al Buraik and Human Resources executive director Nabil K. Al Dabal also attended the tour.
(Photo: Mohammed Al Shaikh/MPD)

“The world around us is changing and will be far more complex in the future so we need to work very hard to keep Saudi Aramco at the top of the game,” he said. Nasser also spoke about the risks the company has to be prepared for both in the short- and long-term and urged employees to maintain operational readiness at all times. 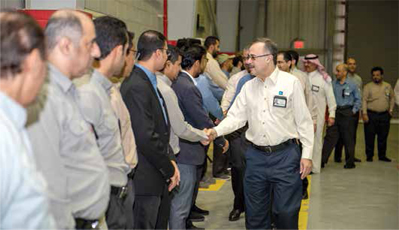 President and CEO Amin Nasser greets personnel at ‘Udhailiyah during a senior management visit of facilities during the Holy Month of Ramadan.
(Photo: Abdullah Alshammari/MPD)

Commitment, Contributions from around the Kingdom

Nasser, along with other members of corporate and executive management, visited a number of company facilities during Ramadan to acknowledge the commitment and contributions of employees, many of whom work in remote facilities far from their homes. Noting that Saudi Aramco produces one of every eight barrels of the world’s oil — and therefore plays a critical role in the global economy — Nasser expressed the company’s appreciation for the efforts of employees who make that success possible on a daily basis.

Global oil prices have dramatic effects on the prosperity and the economic stability of nations, Nasser said, so the work done by Saudi Aramco employees in the field is “critical.” Each employee’s individual attention to detail helps the company to maintain its role as a reliable supplier of energy to the world, and it also ensures that the world gets the energy it needs. 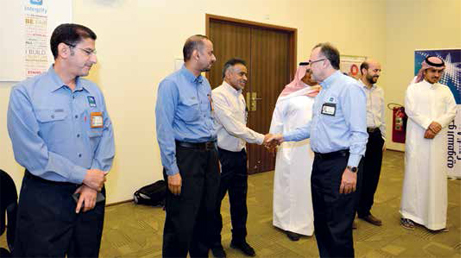 President and CEO Amin Nasser meets with personnel at Riyadh Refinery during a tour of facilities in the Holy Month of Ramadan. 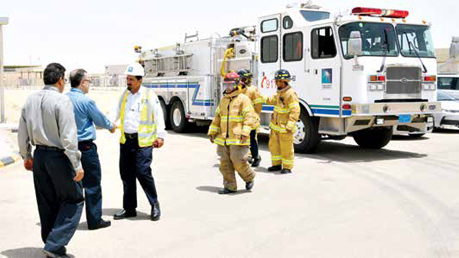 President and CEO Amin Nasser meets with Fire Protection Department personnel at Khursaniyah Gas Plant during a tour of facilities in the Holy Month of Ramadan.
(Photo: Abdulaziz Al-Moaiweed/ MPD)

The company’s reputation for unfailing commitment to deliver energy to customers and stakeholders, said Nasser, will only grow going forward as Saudi Aramco embarks on a major expansion into the downstream market. For that to succeed, it is essential that production of oil and gas and other feedstock from various Upstream facilities throughout the Kingdom are operating safely and reliably.

Reminding employees that the demand for energy — and energy-related products — will only continue to rise along with population growth and ongoing development globally for the foreseeable future, Nasser said the deployment of cutting-edge technologies as they emerge will be crucial as Saudi Aramco continues on its journey to becoming the world’s leading integrated energy and petrochemicals company. 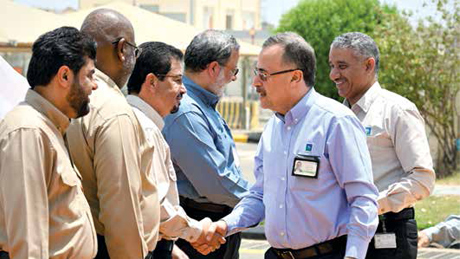 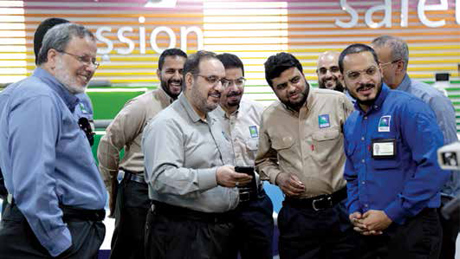 Safety at All Times, at Home and at Work

While expansion and the transformation of Saudi Aramco is taking place, Nasser’s message to employees was to also keep safety in mind at all times — on- and offthe- job — with traffic safety remaining a key area of importance for the company.

Nasser also highlighted the company’s efforts with regard to addressing various challenges, including climate change, care for the environment, and citizenship and community initiatives.

“You are working away from Dhahran, but you are at the core of what we do,” said Nasser. “You have our appreciation and respect for your hard work, dedication, and discipline in helping Saudi Aramco maintain its leadership position in the oil and gas industry.”

President and CEO Amin Nasser speaks with personnel in the central control room of the Ras Tanura Refinery, during a senior management visit of facilities during the Holy Month of Ramadan. During his visit, Nasser emphasized the importance of personal health during the holy month, and also about remaining vigilant at all times.
(Photo: Moayed Al Qattan/MPD)
Under: Pipeline
Share This:
comments powered by Disqus