CEO at Oxford: Staying The Course 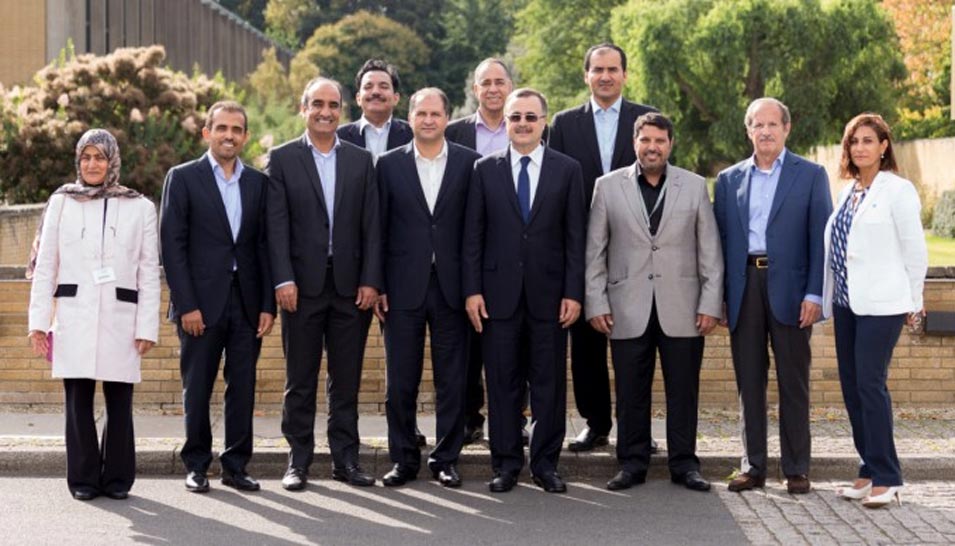 Amin Nasser was joined by Fahad Al-AbdulKareem, president of the Aramco Overseas Company, along with Saudi Aramco officials and representatives of various institutions from Saudi Arabia, at the Oxford Energy Seminar.

In a 30-minute address to attendees of the Oxford Energy Seminar in London, Saudi Aramco president and CEO Amin Nasser outlined some key factors that will play a role in what he described as a “bright horizon” for the company, for the Kingdom, and even perhaps for the energy industry in general.

Speaking on Saturday, September 24 to an audience of industrialists, managers, and other professionals involved in public or corporate decision-making in the field of energy at the 38th annual seminar, Nasser conceded that the energy industry can be “a volatile business” but was quick to add that, on many levels, challenging times can also be seen as an opportunity.

He guided attendees through six main aspects of vital importance to the industry that he believes may offer not only relief during the current downturn in oil prices but can potentially pivot companies forward if handled with due diligence.

The first of these factors, he said, revolves around cost management, efficiency, and competitiveness. The current downturn, he noted, should be seen as an opportunity for energy companies and service contractors “to scrutinize project fundamentals through a cost-competitiveness lens.

The second factor he touched on as crucial to maintaining an even keel during turbulent times involves agility and flexibility so industry players “can rapidly adapt to market developments.” He noted that at Saudi Aramco, for example, the company has made short-term adjustments by deferring and stretching discretionary support projects while preserving core undertakings in both upstream and downstream.

“That has helped us weather current market conditions while keeping our strategic programs and initiatives on track,” said Nasser.

Financial robustness, he continued, is a third factor for the energy industry to heed, as it can both enable companies to weather the storm and also allow them to capitalize on attractive opportunities that sometimes present themselves in tough times.

Nasser stressed the importance of developing a more diverse business portfolio as another key variable, noting that currently those companies with a strong presence in the refining, marketing and petrochemicals sectors “are performing distinctly better” than those without adequate diversification.

With that in mind, Nasser said Saudi Aramco “continues to look at suitable inorganic growth opportunities in both the downstream and chemicals sectors” within the Kingdom, as well as internationally.

Technology, led by research and development, is another main area that the industry can use as a springboard to enhance operations and efficiencies, said Nasser. While the temptation to scale back on this front often surfaces during turbulent times, Nasser reminded those in attendance that many challenging industry projects were once considered unfeasible until new technologies were developed and deployed.

“Over time, technology has the potential to supercharge the productivity of our work,” said Nasser, pointing out that Saudi Aramco is working to achieve that goal by leveraging expertise through 11 research centers and technology offices spread across three continents.

In highlighting the need for research and development expertise, Nasser touched on the final of the six factors he deems of vital importance to the industry today — global talent.

“Without it, the other five factors become difficult, if not impossible, to activate because we require qualified people with multidisciplinary skills to deal with increasing complexities, new technologies and processes, and more ambitious targets,” said Nasser. “The answer is to make strategic investments in our own people at all stages of their careers, and to ensure that the pipeline of young talent continues to flow by working with universities, professional societies, and other educational entities.”

Nasser also discussed Saudi Arabia’s Vision 2030 in his speech, describing it as “a comprehensive blueprint for the Kingdom’s future” envisioning a strong, thriving Saudi Arabia built on a diversified and sustainable economy, and a nation capable of competing at a global level while offering full, high-quality employment to its people.

In summing up and looking at the overall market ahead, Nasser expressed a sense of optimism for the industry.

“We view current market challenges as a passing storm set against an otherwise bright horizon,” he said.

During his address, Nasser also paid tribute to the founder of the Oxford Institute for Energy Studies, Robert Mabro, who passed away last month. Describing him as “a larger-than-life figure” who was one of the keenest observers and sharpest commentators within the energy industry, Nasser said Mabro’s contributions are legendary.

“Today’s group,” Nasser said in addressing the audience directly, “follows a generation of oilmen and women who have benefited from Robert’s life work, and as each of you progresses in your respective careers, you will ensure that his legacy remains a living one.”