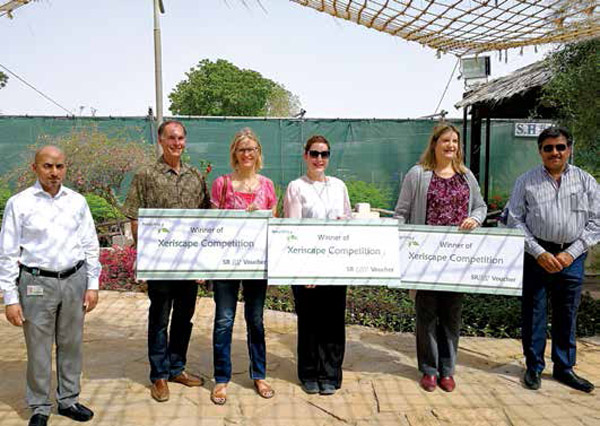 Meshari M. Al ShaikhMubarak, left, manager of the Central Community Services Department, is joined by Nabeel A. Al Dughaither, administrator of the Dhahran Gardening and Sanitation Division, in recognizing the winners of the first ever xeriscape gardening competition in the Dhahran community. The winners included Peter and Jennifer Crisi (third place), Rose Healy (second place), and Tracy Olckers (first place).
Published in the June 14, 2017 issue of The Arabian Sun. Article by Jessica Weirmier. Photos by Musleh Al Khathami/MPD. Reprinted with permission.

The winner of the inaugural xeriscape gardening competition in Dhahran is the first to admit she isn’t a gardener. However, the idea of an environmentally friendly yard that takes less time to tend certainly appeals to her and her husband — both of whom work at Saudi Aramco.

“My husband left for 10 days, and my son and I wanted to surprise him,” said Tracy Olckers. “We started with the fountain, which uses recycled water.”

Using the water fountain as a focal point, they added colored basalt rocks, and several pots filled with many varieties of cactus plants.

“Now, I enjoy sitting outside in the mornings with my husband and a coffee, watching the neighborhood go by.”

The xeriscape garden takes only about one cup of water per week to keep the cacti thriving, which means she and her husband can both spend more time enjoying the tranquility of their xeriscaped space.

With some ingenuity, native plants, and attractive landscaping, Dhahran residents offered some unique and attractive yard designs to be judged in the first-ever xeriscape gardening competition hosted by the Recycling Group in the Gardening and Sanitation Services Division. (Photos: Musleh Al Khathami/MPD)

An Era of Water Conservation

In an era of water conservation, the Recycling Group in the Gardening and Sanitation Services Division hosted the first ever xeriscape gardening competition in the Dhahran community. Community residents responded, submitting their gardens with a goal of showcasing how beautiful a water-conscious garden can be.

“We wanted to start something that encourages people to use less water,” said Zeina Atie of the Recycling Group. “Also, this fits with the environmental stewardship of Saudi Aramco. In a region where water resources are scarce, it makes sense to use plants that need less water and to replace grass with hardscaping, such as mulch, tiles, rocks, or succulent-type ground covers.

When the call went out to the community for xeriscape entries, many residents got involved. That kind of community involvement is critical to the success not only of the program, but sustainability in general.

“Having the community on board with water conservation is important because we cannot do this alone,” said Meshari M. Al ShaikhMubarak, Central Community Services Department manager. “Water is a precious resource, especially in-Kingdom, so having the community appreciate the value of xeriscaping is important.”

No Newcomers to Xeriscaping

Rose Healy, who was awarded second place, immediately xeriscaped her garden when she moved into her house three years ago.

“I knew I didn’t want grass, so I chose hardy species and set up the drip irrigation for them,” she said, adding that she deliberately chose a low maintenance eco-conscious garden.

The entire backyard isn’t just a haven for Rose; it’s also a haven for her rescued pet tortoise, Gizmo.

Peter and Jennifer Crisi placed third in this first ever xeriscape contest. The couple has been using xeriscape gardening techniques for many years, explained Peter. “A neighbor inspired us and started us out,” he said. “She gave us a Yucca plant and would share ‘babies’ when she was gardening.”

Peter said they practice xeriscape gardening because it makes sense for the region they live in. “For me, it was a belief that if you are gardening, trying to do something that doesn’t work as a native garden won’t have as much success.

“I like the idea of working with plants that thrive in the native environment,” he added.