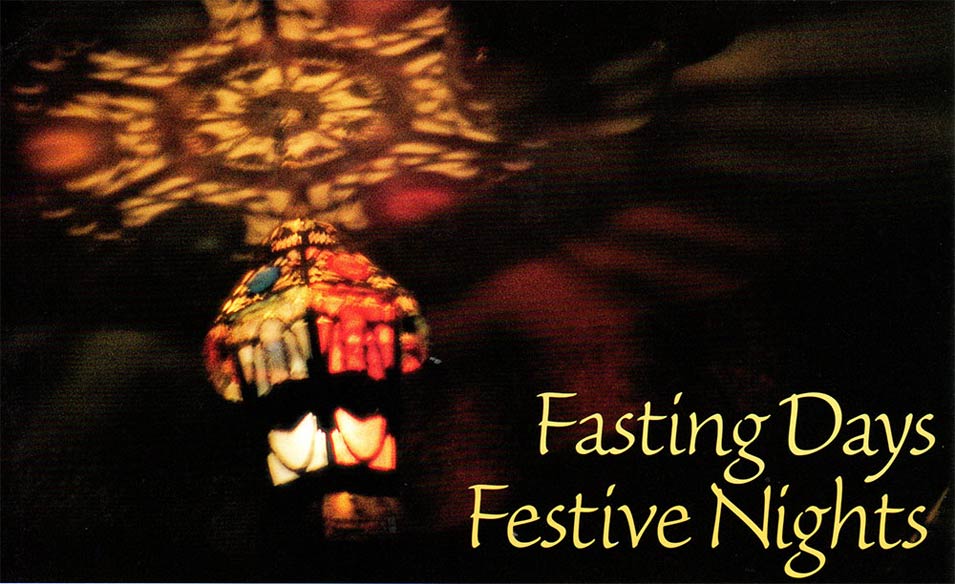 It's three o'clock in the afternoon and a cacophony of car horns, bus engines and shouting people is making an unusually unbearable din in what is, on the best of days, a noisy city. This is not rush hour, nor a construction bottleneck. This is Ramadan. Nearly everyone in this metropolis of 16 million people is trying to get home by exactly 4:55, in time to break the day's fast with family and friends.

Then, as the call to prayer marking sunset ripples outward from the mosques, everything else falls silent. The streets, suddenly, are empty and the city motionless. It's time for iftar, the sundown meal at which Muslims break a day of fasting. Like a wave, iftar moves across the continents: It's been an hour since Saudis broke their fast; next hour Libyans will sit together; then Moroccans and, much later, Americans.

The holy month of fasting is when Egyptians, like all Muslims worldwide, not only abstain from food, drink and sex from sunrise to sunset, but also spend more time in prayer, get out to visit friends and relatives, and give and receive charity. It is a month of contrasts: celebration as well as reflection; measured abandon as well as strict discipline. During Ramadan, Cairo is transformed, perhaps more vibrantly than any other city in the Muslim world, into a kaleidoscope of light and color, with glittery streamers connecting the houses and colored-glass lanterns hanging everywhere. With religion playing a major role in most people's lives and family relations regarded as paramount, one thing is clear: Everyone loves Ramadan.

"The Egyptians are people who are passionate about Islam," says Shaykh 'Abd Al-Moaty Bayoumy, dean of theology at Cairo's Al-Azhar University. "They are also a people whose customs and traditions are family-oriented. All Egyptian families like to eat iftar together and to visit each other during Ramadan."

Ramadan is the ninth month of the Islamic calendar, and because that calendar is lunar, Ramadan falls 11 days earlier each solar year. It is celebrated as the month in which the Qur'an, Islam's holy book, was revealed to the Prophet Muhammad, and Ramadan fasting is one of the five obligations of Islam.

Over the last few decades, religious observance has been on the rise in Egypt. As a result, "there is more of a celebration during Ramadan," says Abdel Rahman Salem, professor of Islamic history at the American University in Cairo. "More people are going to the mosque to pray and expressing their happiness in a ceremonial way. Ramadan is a bigger social and religious occasion." 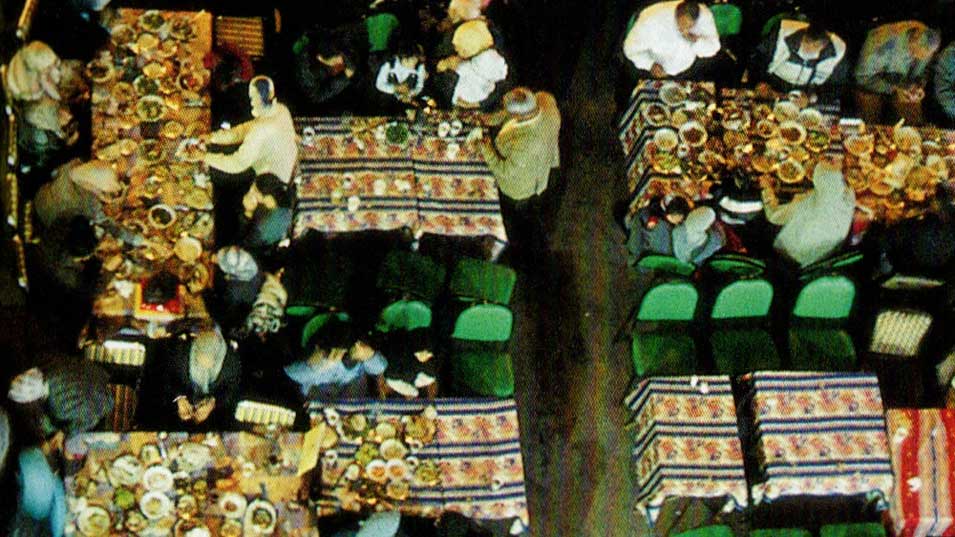 During the daylight hours of Ramadan, people seem quieter, contemplative. "Westerners believe that we don't eat or drink and that's it," says Sharifa Attallah, an English language teacher. "No, this is the last thing. Fasting is about abstaining from all temptations and desires. It's a training, a jihad against the self." Through fasting, Muslims are supposed to feel compassion toward the poor, practice patience and feel closer to God.

The frenzied rush to get home for iftar begins to build around two o'clock as many leave work early. But not everyone goes home: Some break their fast at iftars sponsored by companies, clubs and friends at restaurants and hotels. Others visit "tables of mercy," where wealthy patrons set up seating in the street, on the sidewalks or even in the grassy medians of thoroughfares to serve free iftar meals to the poor—a popular way for Muslims to donate 2.5 percent of their worth to the poor, as Islam requires

A traditional Cairene iftar table is topped with dishes of meat, rice and vegetables, Levantine mezzas such as hummus and baba ghanoush, vegetable salads and fava beans, the national staple. Customarily, iftar begins with dried dates and a drink, which is how the Prophet Muhammad broke his fast some 14 centuries ago. One popular drink is the apricot-based qamar el-din. For dessert, Cairenes savor kunafa, a kind of syrup-saturated shredded wheat, and qatayaf, a folded pancake filled with ground nuts and dried fruit, soaked in syrup, and baked.

By 4:30 p.m., Hagg Faisal's mercy table, under a colorful Ramadan tent on a sidewalk in the wealthy neighborhood of Zamalek, is filling up with old men in torn plastic sandals and women carrying shoeless children. With his and others' contributions, Hagg Faisal serves 300 meals a day for 30 days to the poor, passersby and students in the area. Huge pots of rice, meat and string beans are heating in the streetside kitchen, and a piece of bread and a dried date waits at each place. By 4:50, nearly every seat is taken. At 4:55, with the first verses of the call to prayer, the diners begin to eat, ravenously, silently. Meanwhile Hagg Faisal calls to people outside: "Did you have iftar? Come. There are places inside." A man hops out of a taxi and runs in. A family hustles to sit down. Ten minutes later, many are already getting up to go to the mosque for prayers, or to get home and rest.

For those who pray after iftar, the most popular traditional site is the Al-Hussein mosque in central Cairo. There, men of all ages, wearing suits and ties or gallabeyas (robes) and scarves, bend to take off their shoes at the door and enter to pray the Ramadan tarawih prayers.

For many, praying tarawih with hundreds of others at AI-Hussein during Ramadan is a holy experience. "I feel more spiritual, a great inner peace," says Mokhtar, a 56-year-old administrator of a textile company. "When there are more people, there is greater submission to God."

By eight o'clock, prayers are over, and the area around AI-Hussein is boiling with activity. People are out shopping in the medieval covered markets, sitting in cafés or listening to live music behind the mosque. Tables and chairs spill onto the streets with people drinking sahlib, a hot, creamy drink with nuts and raisins, or smoking sheesha, the "hubbly-bubbly" waterpipe. 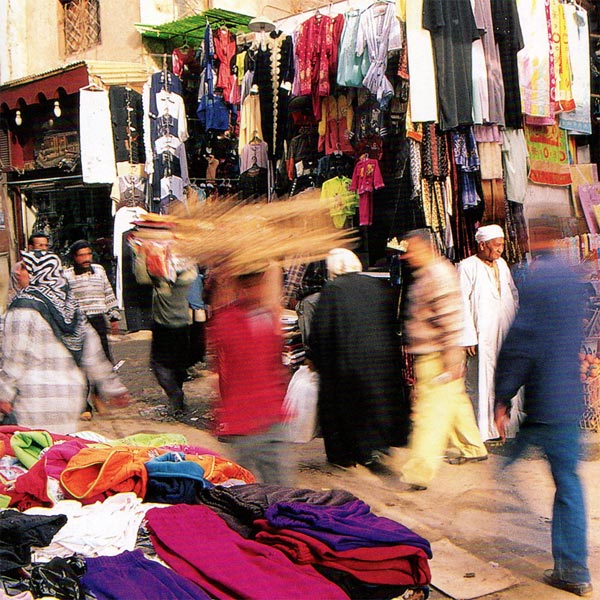 At the center of all this, the 200-year-old Fishawi's Café, with its intricate, turned-wood screens (mashrabiyyah), is so crowded that the brass tables and steel chairs fit like puzzle pieces in the tiny, narrow space. Hawkers squeeze by selling Ramadan-lantern key chains, while patrons sip hot hibiscus tea (karkady] and exhale billows of sheesha smoke. Many will remain until one or two o'clock in the morning, when they'll eat suhur, the lighter, pre-dawn Ramadan meal.

While they enjoy themselves in this most traditional of Egyptian milieus, others are partying in more sophisticated scenes. At Dar al-Amar, on the top floor of a riverboat called Blue Nile, men in black leather jackets and women cling-wrapped in pink Lycra sit at low brass tables, alternately chatting with each other and talking into their mobile phones as they sip tea. It is midnight, and the place is just filling up.

"I usually go out every night during Ramadan until around 3:30," says Dalia Kordy, 33, a marketing manager. Tonight she is wearing big hoop earrings and shiny dark lipstick.

"Usually we can expect family trouble if we're too late, but during Ramadan it's different," says her friend, Dalia Reda, 28, customer service manager at the same firm.

"They're used to us having suhur at around one or two, so it's fair enough to come home late."

Back on shore, in the lower-class neighborhood of Bulaq al-Dakrour, people are also out, playing dominoes in small cafés, buying fruit for suhur, even getting a haircut at the barbershop. The apartment buildings appear to be almost interwoven with glittering silver-foil streamers and lines of colorful plastic pennants. Shops are covered in flashing colored light bulbs.

Inside one home, Khaled Ahmed Mahmoud Moustafa and his family are about to eat suhur. "Everyone has a role during Ramadan," says Moustafa, who lives with his wife, daughter, parents and two brothers in a tiny four-room apartment. "The children all get lanterns. Young people like me, we decorate the streets, so they're always lit. The older people sit with the small children and read the Qur'an. Ramadan is special for everyone."

At 2:30 a.m., he and his family dip fresh pieces of flat-bread into plastic bowls of fava beans and white cheese mixed with chopped tomatoes. It's quiet as they eat. Normally at this time of night a masaharaty comes down the street, banging a drum to remind anyone asleep to wake up and eat before sunrise, but tonight he doesn't show.

For the Moustafas, it doesn't matter. They've eaten and soon they'll sleep. After a few hours they'll wake up and, with Muslims around the world, begin another day of fasting.

Sarah Gauch is a free-lance news and magazine-feature writer in Cairo. Lorraine Chittock ([email protected]) is a free-lance photographer and writer whose most recent book is Cats of Cairo: Egypt's Enduring Legacy (Abbeville Press, 2000).