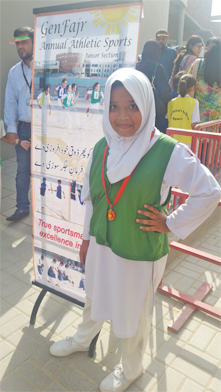 Zoya Imran-Author of the report 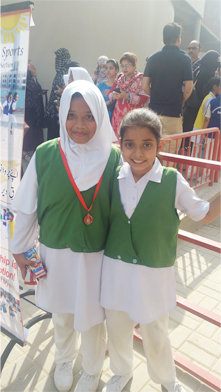 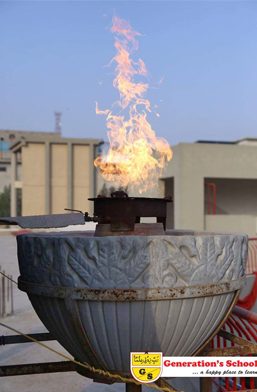 There are only a few good schools in Karachi and Generation’s School is one of them. The school is divided into three sections - Junior, Middle and Senior. Zoya Imran and Zara Imran, my granddaughters, are in the Junior section.

The Juniors Athletic Annual Sports Day was celebrated on Saturday, February 17, 2018. All the students and their parents were to reach Generation’s School at 7:30 AM sharp. The parents were seated on the bleachers while the students were on the mats. As I am in class V and all the Class V and VI were to sit with their group on the mats, I settled down on the mat along with my classmates. Grade III and IV were to stand in their assorted contingents according to their respective houses.

There are three houses in our school, namely Iqbal with green color, Jinnah with yellow color and Syed with blue color. The names of all the houses are after the famous leaders of our country. I and my sister are in Iqbal House.

My sister was ready in her contingent for the fantastic walk past. The students selected for the torch-bearing made their way through the ground with a torch on fire; they reached the rooftop and lighted the “Shaula-Tul-Ehsaan”. The flame of Excellence was a fabulous sight. The commentators started their speech with Dua and outstanding performance of the Torch of Knowledge. The walk past began and all the students were very energetic and happy, it was a perfect performance. As soon as it ended, it was time for P.E. Display of Grade V and VI. We entered with colorful pom-poms in the playground. All the enthusiastic students performed synchronized exercises with pure perfection. 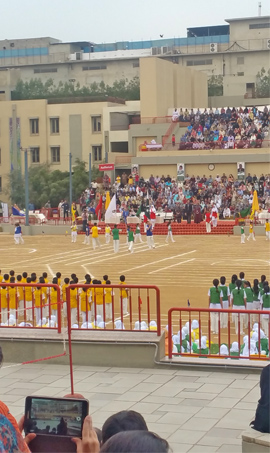 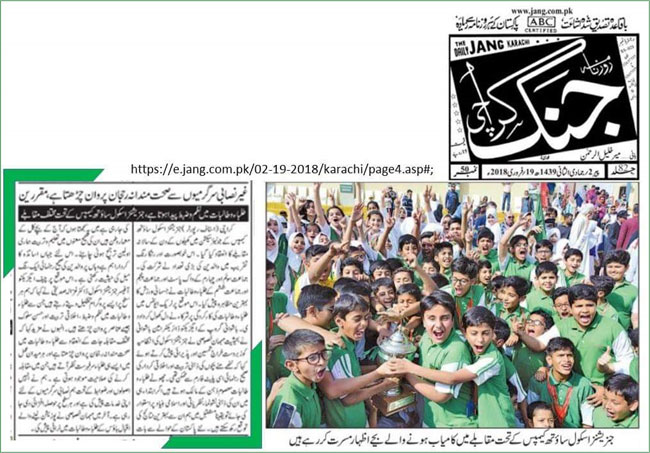 Students are bowing down to show synchronization 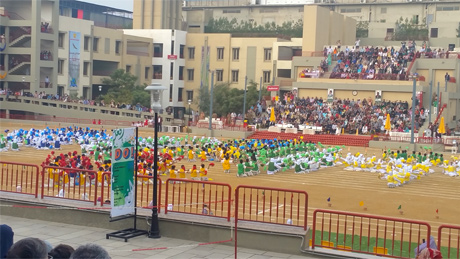 The oath-taking Ceremony is taking place 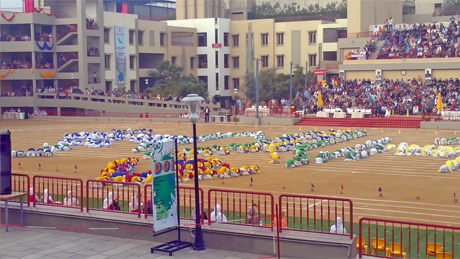 Students of all houses are in the playground 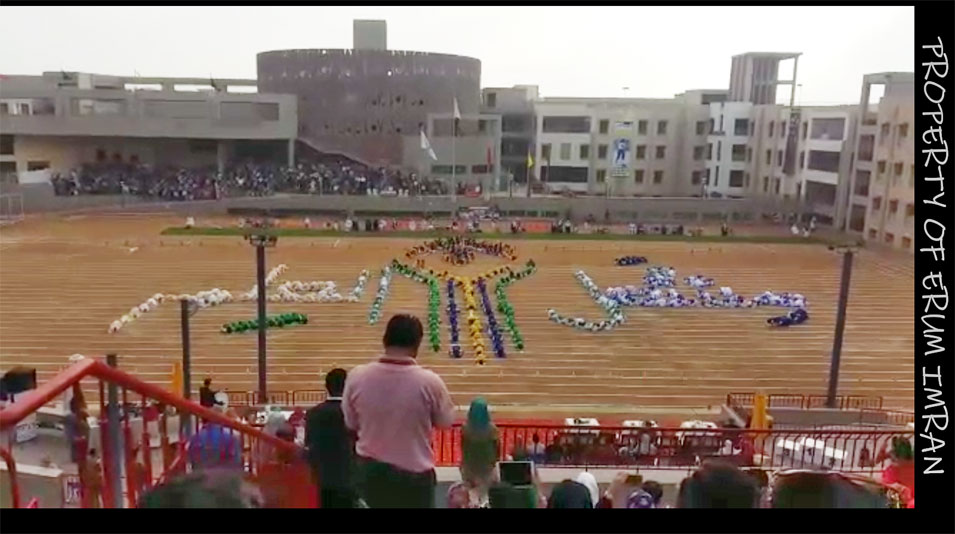 We then did a lovely formation forming the Arabic Words “MASHAL-UL-ILM” while the torch was in the centre. We then did the “Hakka” in Arabic called for Iqbal, “If’al” for Jinnah “Ijha’t” for Syed “Is’ad”.

The races took place. When my turn came I was very nervous, I looked at my mother and then at the whistle, as soon as it blew we were off. I participated in the Obstacle race. There were hurdles and other Obstacles. When the race ended, I realized that I stood 1st Alhumduellah and I received a medal and was asked to settle on the Winners Mat.

After a while Relay Race took place. We screamed and cheered for our houses. Iqbal won one relay, Jinnah won two and Syed won one. Our house won only one so we were very sad and a feeling of sorrow.

After Relay the winners of every house sat in the centre of the ground, our Vice Principal Ms. Khadija Noorani as well as our Chief Guest Mr. Ameen Hashmani gave us a short speech. 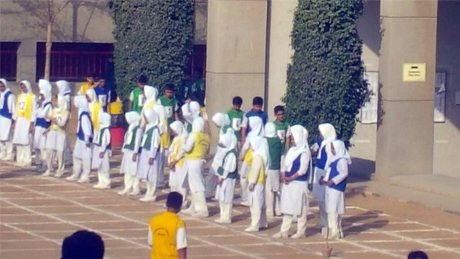 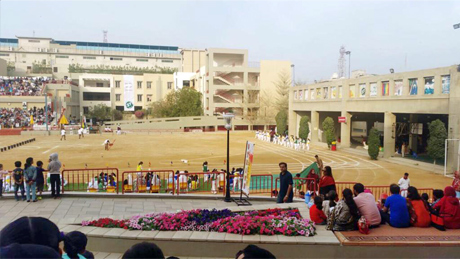 A nice view of the play ground 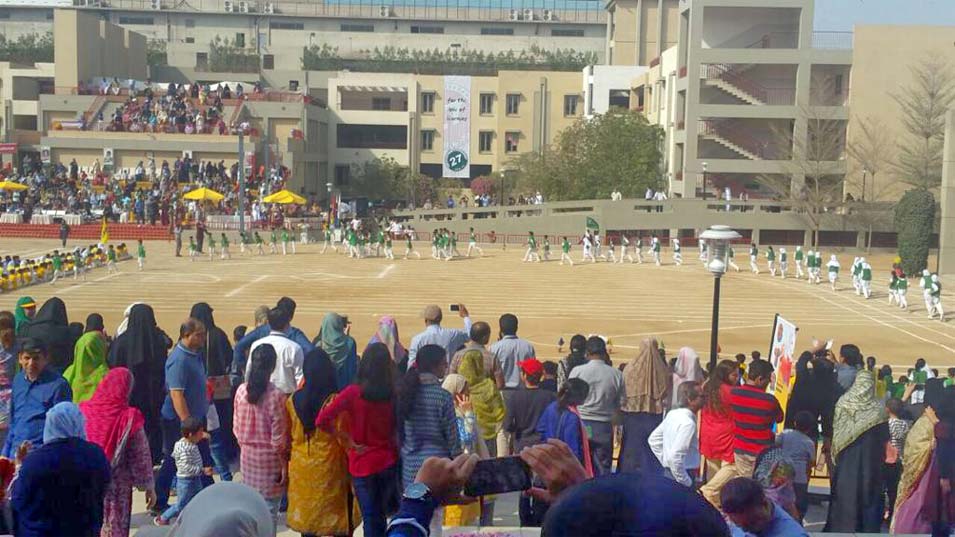 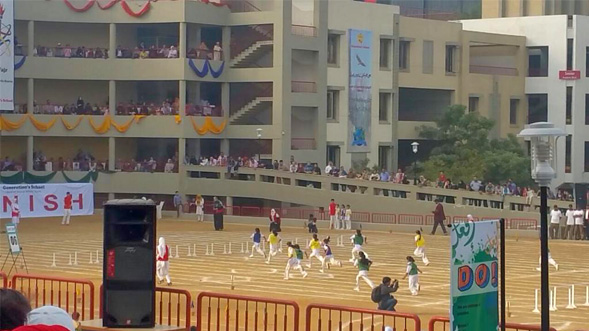 The hurdle race in progress 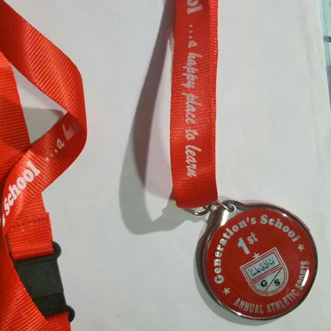 Now it was result time, we were very nervous. We all in our house started praying and reciting Dua’s. First our Head Mistress Ms. Zill-e- Huma Asif appreciated every participant and then she stated that two houses have a tie. Then she said that Iqbal House has 218 points, we were heartbroken. We were so sad that we lost hope. But then Madam Zill-e-Huma said that Jinnah and Syed have 192 points. We all screamed and shouted and cheered as loud as we could. Our hope was back. Our House got the Trophy and did the Victory Parade. The event concluded with Dua-e-Noor and lots of pictures.

SAEEA (Saudi Aramco Ex-Employees Association) wish Zoya and Zara a very bright future and hope that they both will keep up the good work and always keep their parents proud.