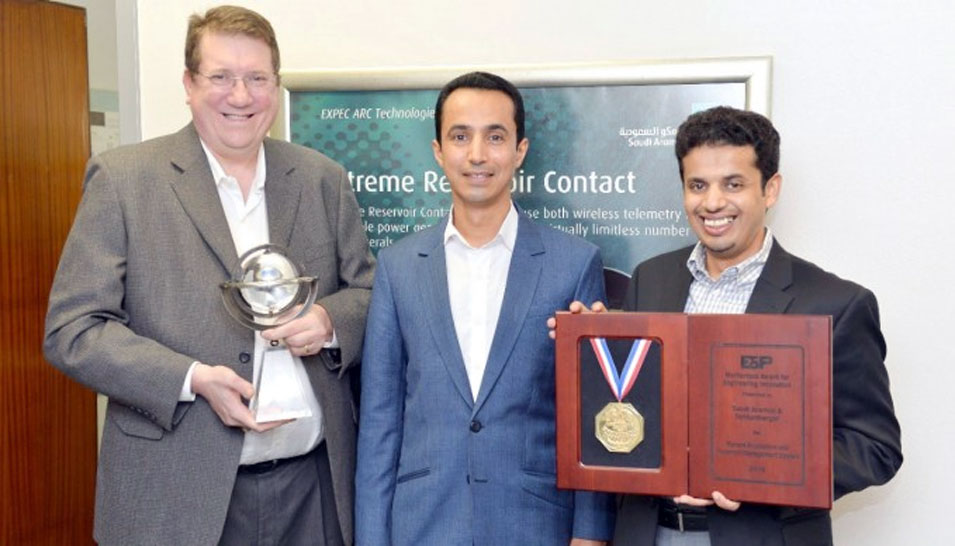 From left, Brett Bouldin, Ali A. Al-Meshari, and Ghaithan Al-Muntasheri with two awards received for the Madara technology.

Saudi Aramco’s EXPEC Advanced Research Center (EXPEC ARC) has won 20 international prestigious awards so far in 2016. And recently EXPEC ARC added two further accolades to its tally, with two international awards for one of its technologies, Manara, which was recently deployed in the field to address an upstream challenge.

Currently undergoing final field testing in the Shaybah field, the Manara system pushes the latest technological innovations to the limit, combining multiple valves and real-time data collection capability to all branches of an extreme-reach multilateral well. The ability to measure flow rates and to control flow along all sections of multiple laterals allows petroleum engineers to increase the recovery of hydrocarbons over time from every well where it is deployed.

“What makes this system special is that you get immediate feedback while you are producing along all sections of a lateral well,” said Brett Bouldin, a petroleum engineering consultant at EXPEC ARC who has been involved with Manara since its inception. “Imagine driving a car when you can’t see what’s happening in front of you. With Manara, we’ve solved that. You have real-time monitoring, and that’s the eyes. You have variable valves, and that’s the steering wheel. And you have the human being driving it, and that’s the decision making. In a collaborative fashion with our partners, we developed a system that would apply current technological innovations to the special challenges of Saudi Aramco’s field operations.”

As home to some of the longest extreme-reach wells in the world, Saudi Aramco is well placed to extend this new technology to a number of applications, all of which could greatly improve long-term oil and gas recovery and revenues for the Kingdom.

Now in its 47th year, the Special Meritorious Awards for Engineering Innovation (MEA) represent the industry’s most established and widely respected engineering awards program. MEA entries are judged on their “game-changing significance,” both technically and economically. The World Oil Awards were established 15 years ago and recognize and honor the upstream oil and gas industry’s top innovations and innovators.

The Manara system uses technology — smart valves, flow sensors, and extended-reach lateral wells — that have been around for a while, but it applies that technology in novel ways. It combines a number of major innovations:

Where previous deployments of these same technologies may have used valves sparingly to monitor one particular branch of a multilateral array, the extreme reservoir contact (ERC) approach of Manara places valves at a number of different points along each branch, giving petroleum engineers the ability to identify and resolve problems and blockages in real time.

These capabilities better help reservoir management in terms of controlling water breakthrough and improving the reservoir sweep efficiency of oil. The electrical valves of Manara allow these decisions to be made in minutes.

Not only does Manara have potential applications in tight carbonate reservoirs, but it can also help the company recover more oil from other fields where a single well may penetrate multiple hydrocarbon reservoirs, each with its own characteristics. Manara’s use of state-of-the-art borehole tools with “non-wet” inductive couplers also allows the system to work in saltwater environments, where wet connectors often short out and fail. This capability is useful not only in offshore settings but also in onshore reservoirs that come into contact with underground water with high salt content.

One additional application is the ability to monitor the performance of valuable tools underground, such as electrical submersible pumps (ESPs). Having real-time data from individual tools allows drillers and production engineers to pull out ESPs before they fail and to conduct repairs in a timely fashion to prevent downtime. The inductive coupler allows the ESP to “disconnect” from the Manara system and be retrieved. Simply plug in a new ESP completion, and resume production.

“ERC Manara is one of our cornerstone projects in EXPEC ARC,” said Ali A. Al-Meshari, acting manager of EXPEC ARC. “But we are not finished. Future versions of Manara are already planned to be less expensive, more reliable, and contain improved sensing systems. By 2025, Manara will be the platform to permanently install seismic and electromagnetic sensors and sources in the reservoir, capable of monitoring flood fronts in real time. By that time, Saudi Aramco will have fulfilled its vision for full proactive reservoir management.”