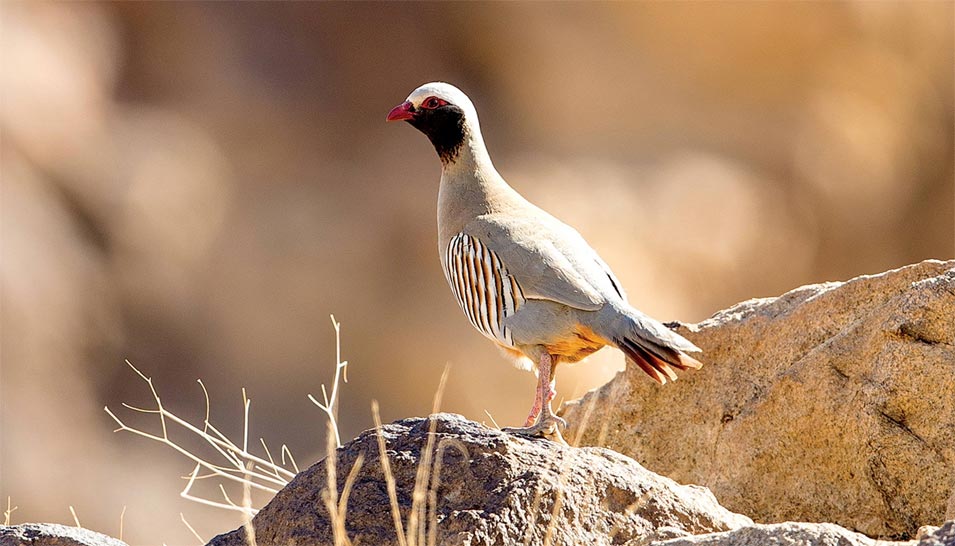 Philby’s partridge is a native to southwestern Saudi Arabia and northern Yemen, one of 498 bird species commonly found in the Kingdom.

Every year, May 22 is International Day for Biological Diversity, a United Nations (U.N.) sanctioned day to promote and observe biodiversity issues.

It also means protecting our oceans, forests, and indigenous societies, as well as ensuring food security and dealing with climate change.

‘Our Biodiversity, Our Food, Our Health’

For 2019, the May 22 theme is “Our Biodiversity, Our Food, Our Health.” According to the U.N., biodiversity serves as the foundation for sustenance and nutritional well-being, acting as a “key catalyst” in transforming food systems and improving human health.

“In the past 100 years, more than 90% of crop varieties have disappeared from farmers’ fields,” the U.N. Environmental Program said in a statement unveiling the 2019 theme. “Half of the breeds of many domestic animals have been lost, and all of the world’s 17 main fishing grounds are now being fished at or above their sustainable limits.”

While food variety may be on the rise, the global diet — or what people actually eat — is becoming increasingly lacking in variety. To ensure proper diet across the planet and provide nutritious meals to the global population, healthy biodiversity is a fundamental requirement. After all, healthy ecosystems are needed to ensure healthy crop, meat, and fish offerings.

Fortunately, protecting and enhancing biodiversity is nothing new to Saudi Aramco.

Many inside and outside the Kingdom are aware of our work developing the Shaybah Wildlife Sanctuary, in which Saudi Aramco and partners reintroduced the Arabian oryx, the sand gazelle, and the ostrich into a securely fenced protected area spanning 637 square kilometers — an area not much smaller than the Kingdom of Bahrain.

This project also supports 10 plant species that are able to withstand some of the most extreme conditions on Earth, while other studies have revealed that as many as 13 native reptile species, 18 mammal species, and a staggering 176 bird species might also occur within the fenced area. Add to that, the sanctuary is likely to protect 19 species that occur only in the Arabian Peninsula.

In addition, the sanctuary aligns with the U.N. Convention on Conserving Migratory Species by creating a safe haven for up to 169 migratory bird species that potentially pass through on their epic annual journeys between their African foraging grounds and their breeding grounds across Europe and Asia.

Saudi Aramco’s mission to both protect and enhance biodiversity is not limited to Shaybah. At of the end of 2018, the company identified 18 sites that contain high-quality habitat that exceed the criteria to be designated as Corporate Biodiversity Protection Areas, meaning that each of these sites contains regionally or internationally threatened, migratory or endemic species.

To protect natural ecosystems elsewhere, the company continues to plant mangrove seedlings with more than 2.2 million already planted. Restoring mangrove forests will not only absorb significant amounts of carbon dioxide (2 million mangroves will contribute to the removal of approximately 4 million tons of the gas over the lifetime of the trees, and that’s the equivalent of carbon dioxide emitted by more than 820,000 cars), they nurture the sea life species needed to supply the Kingdom with healthy seafood resources.

Elsewhere, the company is working to plant 1 million native trees across the Kingdom that will not only enhance biodiversity but will also combat desertification by slowing down the advance of blowing sand.

Among the region’s more well-known indigenous reptile species is the dhub. These spiny-tailed lizards can grow up to be 76 cm long and are considered a high conservation priority in Saudi Arabia.

To put those numbers into perspective, Saudi Arabia has more bird species per square kilometer than the U.S., Australia, or Brazil. (Source: EPD research using data from BirdLife International)

Almost 300 species migrate through the Kingdom annually, and three major flyways intersect the peninsula, bringing birds from as far away as India, Madagascar, South Africa, Scandinavia, Siberia, and even Alaska. Some of these birds have flown more than 10,000 kilometers by the time they reach Saudi Arabia.

To protect and enhance biodiversity, we can all play our part. Be sure to turn off lights, take care of water leaks, and take green matters into your own hands daily. Small steps, when taken on a mass scale, can make a big difference.