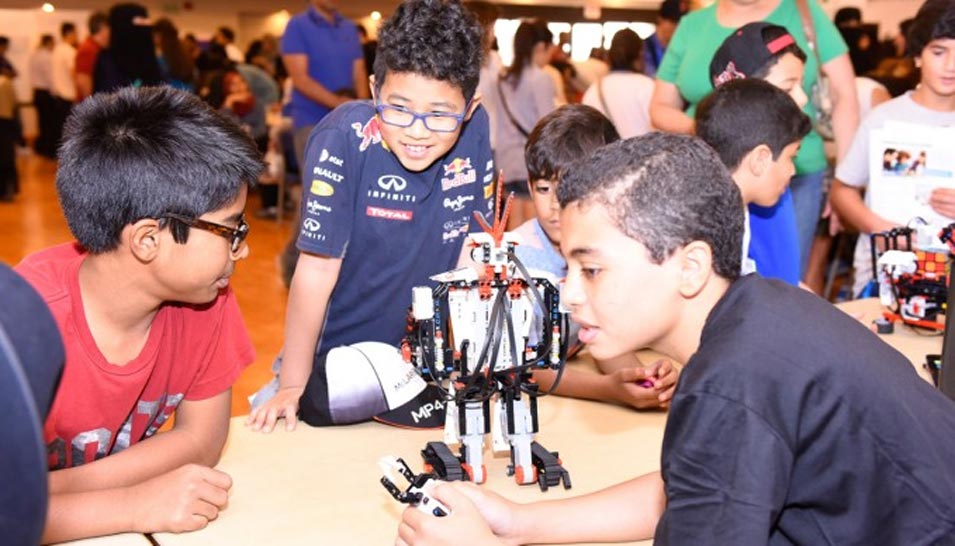 More than 400 Saudi 5-12 grade students try their hand at technologies such as robotics and 3D printing at the 2nd Maker Expo.

Fostering innovation in the Kingdom is a key part of Saudi Aramco’s strategy to become the world’s leading energy and petrochemicals company, and it is a key component of the Saudi Vision 2030 to create sustained economic growth, diversification, and job creation for future generations.

For a vision on this scale, it is important to start at the foundations, to nurture the creative spirit of innovation in the youngest generation, through the science and technology programs that cater to school-aged children around the Kingdom. This is the goal of Saudi Aramco’s Training & Development’s General Educational Partnerships Division’s (GEPD) ongoing support of a Maker Movement within the Kingdom. With a second Maker Expo in April, there are already signs that the innovative spirit is taking hold.

HERE ARE THEIR STORIES

Young Samir Bakir had been a “Lego addict” from a very early age and on his 9th birthday, he took this fascination to a higher level when he received the EV3 Mindstorm kit. Mindstorm is a Lego system that allows young people to build robots and to write the computer coding that controls them.

For the Maker Expo in April, Samir decided to use the Mindstorm to create a Rubik’s Cube Solver.

“He worked on it for over four weeks in between his school homework and weekends,” his mother said. “He encountered many problems forcing him to modify the tilt arm from the original design so that the cube would not slip when being rotated.”

When the solver would not work after color scanning, Samir’s father chipped in with a suggestion to try an older version of the software. The Cube Solver worked. It was a lesson in persistence that Samir has taken to heart.

Ron Monsen, a geophysical consultant in the Upstream Continuing Excellence and Technology Planning and Development Group at Saudi Aramco, had a close-up look at Samir’s robotic Rubik’s Cube Solver and declared himself impressed.

“As an adult with a grown child I was not aware how far the old Legos my son and I played with had evolved,” Monsen said. “Samir’s project for solving the Rubik’s Cube had me mesmerized for quite a long time. Very impressive!”

Designed by Google engineers in France in 2014, Google Cardboard allows Makers of all ages the ability to engage with VR environments — for gaming and other applications — using smartphones, a cheap pair of plastic lenses, magnets and a cardboard box.

Similar to the groundbreaking VR system Oculus, Virtual Reality systems like Google Cardboard are giving young innovators the tools to simulate the real world through computer graphics. Computer simulation is not just for gaming. Industrial trainers use VR to give trainees the opportunity to learn real-world problem solving skills before being deployed in the field, and as the students at Bayan Garden School learn to create their own VR goggles, they are opening the door to mastering innovation in emerging technologies that may define the 21st century workplace.

At the Maker Expo, groups of students worked together in teams to build a simple robot called a SpoutBot, consisting of switches, LEDs, toy motors, a battery pack, and resistors and requiring no soldering.&nbsp; The SpoutBot was designed by Khan Academy as an introduction to electronic components. When assembled, the SpoutBot would run along the ground until it ultimately hit an obstacle with its antenna. At this point, hitting an obstruction would cause a circuit to close, which activated a LED light, temporarily shutting off a motor and forcing the robot to change direction.

Bayan Gardens School (BGS) students took it one step farther. Fresh off their experience visiting MIT earlier in the spring, where they were taught to properly solder circuits, BGS students created a moving robot in the shape of a camel, called a CamelBot. Students learned the differences of the various components, such as capacitors, resisters, integrated circuits, and LEDs and how to solder these components together to make the CamelBot.

Shahad Al-Omani, Fawzeya Aldossary, and Juri A. Al-Huthali were glued to their stations during Maker Expo, explaining and guiding the participants on how to solder and make the CamelBot work. The students also learned some basic diagnostic techniques on what could be wrong if the LED does not light up; such as ensuring the LED is aligned in the correct direction with the short and long leg.

Shahad was one of the first students who eagerly arrived early at Maker Expo. Her father was proud to see his daughter confidently soldering components onto the board and then watching the Camelbot actually moving around and working when completed. Fawzeya, another veteran of the MIT soldering workshop, was thrilled to show others who were clearly impressed with what she had been able to accomplish.

The Maker Expo gave young minds the
opportunity to explore STEM subjects and
the chance to work together in teams.

3-D printing technology has been in existence from the 1980s but not until the last few years has the technology become accessible through the effort of the maker communities. Desktop 3-D printing is now a multibillion dollar industry and identified as one of the top 10 technologies of the future. Currently, innovators are making 3-D printed food, houses, cars, bikes, prosthetics and even human body parts.

To prepare for Maker Expo, GEPD established a temporary Maker Space at Saudi Aramco’s Special Training Center to build a team of volunteer Makers from the College Preparatory Program (CPP) to help guide participants at the event. Despite having busy schedules, the CPP students rapidly and autonomously developed their skills far beyond our expectations.

CPP student Fatima Alnasser, for instance, taught herself to use the 3-D printer to make a dinosaur skull. Such a skill can have many industrial uses. For instance, 3-D printing has helped drive the development of new innovative petroleum-based materials.

Another CPP student, Maram Q. Ejaimi, learned to master the use of the 3-D pens to make some beautiful intricate free hand designs, such as bouquets of flowers. Like more standard 3-D printing devices, 3-D pens are currently being developed for a variety of industrial and other real-world applications. There are 3-D pens that extrude bio materials to repair bones and cartilage in humans.

For GEPD, the Maker Expo is just the beginning of a plan to promote STEM learning and technology in Saudi schools by providing the schools with technology, and teachers and students with the understanding and confidence that they need.