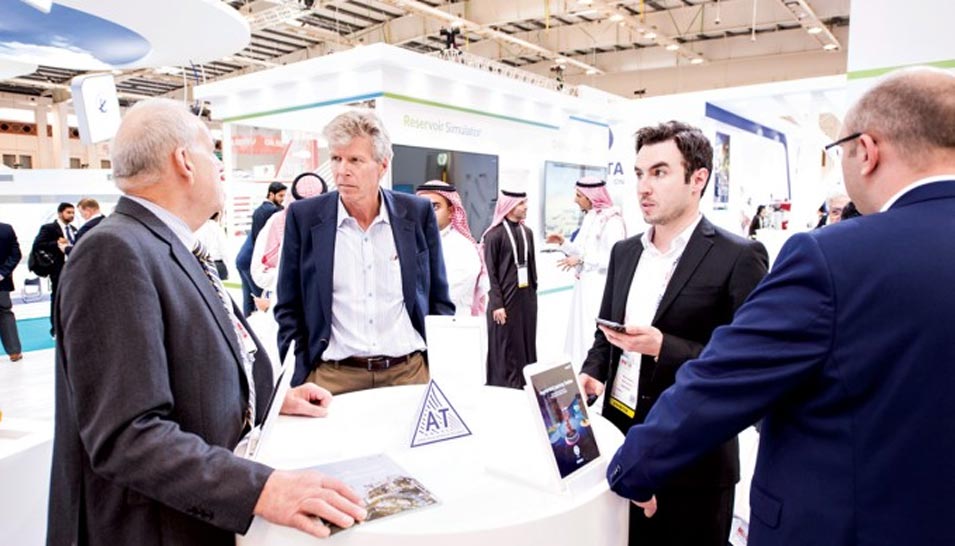 Saudi Aramco attendees discuss the latest advances in reservoir simulation with delegates at the Aramco booth at MEOS.

The energy industry is on a journey of long and complex transition that will see the world reliant on the full palette of energy sources — including oil and gas — for many decades to come, Saudi Aramco’s president and CEO Amin Nasser told the Society of Petroleum Engineers’ 2017 Middle East Oil & Gas Show and Conference in Bahrain last week.

A record 9,353 industry professionals attended the four-day conference, which was held with a theme of “Transforming the Industry through Innovation and Operational Excellence.”

The event, held under the patronage of His Royal Highness Prince Khalifa bin Salman Al Khalifa, the Prime Minister of Bahrain, covered a range of topics focused on the future of hydrocarbons in the energy mix. The biennial conference has played host to more than 92,000 industry leaders and professionals since its inception nearly four decades ago.

MEOS 2017 also honored the conference’s previous chairmen, including former Minister of Petroleum and Mineral Resources, and current adviser to the Royal Court, HE Ali I. Al-Naimi, who addressed the conference on behalf of the former MEOS chairmen, saying that change was one constant in the industry.

At the opening ceremony, Nasser shared the stage with HE Mohammed bin Khalifa Al Khalifa, Bahrain’s Minister of Oil and Chairman of the National Oil and Gas Authority, for a discussion on what lies ahead for the industry. 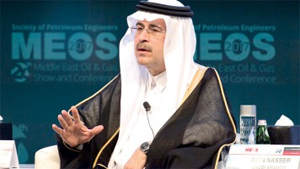 Nasser said the industry was facing various pressures and challenges, and that the global energy landscape was undergoing a transformation.

But, with the global population forecast to grow from 7.3 billion in 2015 to 9.7 billion in 2050, the oil and gas industry is forecast to retain, and build upon, its influential place in the energy mix.

“The industry is transforming significantly with innovation and technological advancements driven by global challenges such as climate change,” said Nasser.

While alternative sources of energy are still developing as a viable source, Nasser said they are not yet capable of shouldering, “a significant burden of the world’s energy demand.”

The transformation will be prolonged and complex, he noted, and oil and gas will maintain a significant influence for decades to come. As an example, electric vehicles are emerging, but currently represent only 0.1% of the global vehicle population of 1.2 billion, which is expected to grow to two billion in about a quarter of a century from now, and three billion by 2060.

“Even as electric vehicles grow, a large number of vehicles will still be advanced conventional vehicles for quite some time, helped by continued improvements in their mileage efficiency and emissions performance,” said Nasser.

He added that the “intermittency” of major renewables, such as solar and wind, is a major challenge and that a solution is gigawatt scale electricity storage, which could become a game changer in freeing renewables from the limitations of intermittence.

Oil and gas will remain essential components in the global energy future for decades to come, said Nasser, and continued investments in the industry are essential to guaranteeing adequate supplies. Lack of investment, he said, could potentially lead to gaps in supply and he urged the industry to continue to become more efficient to overcome possible challenges.

“If we proactively respond to the evolving challenges, I’m confident the industry will have a bright future.” 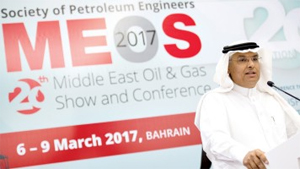 Saudi Aramco had a strong representation at MEOS 2017, underlining the conference’s preeminence as a platform for discussion and the sharing of technical knowledge in the region.

“What our industry has achieved in all these years should make us proud. We have played a pivotal role in driving global prosperity — a role that continues to this day,” said Al Qahtani. “Today, roughly 80% of the world’s primary energy demand is supplied by fossil fuels.

“Even in 2040, we anticipate that the call on fossil fuels will continue to grow in absolute terms and we will still be meeting three-quarters of that demand. And while alternatives such as solar, wind and electric vehicles are making progress and becoming significant businesses in their own right, their share of the global energy mix remains low.

“They also face significant technological and economic hurdles, and time will be the biggest factor in overcoming them.”

Al Qahtani told delegates that key energy institutions and petroleum companies expect long-term oil demand to be in the range of 110 million barrels per day in the 2030 to 2050 time frame.

“Gas is likely to perform even better and is expected to serve as the bridge fuel during the energy transition. So, the role of oil and gas in the global energy mix seems likely to remain significant for decades to come,” he said.

Al Qahtani also highlighted the challenges facing the industry, including upstream costs. These more than doubled in the first decade of the century, staying at that level, before declining during the recent downturn. However, costs were again picking up as activity increased.

“That’s also influenced by the growing maturity of oil fields, and new discoveries and developments being more challenging,” he said. “What makes this trend in our industry even more troubling is that, by contrast, the costs of alternatives are on a downward trend. At some point, their paths will cross. Combine rising costs with continued volatility and cyclicality of the oil market, and pressure will only build on the industry.”

There was, said Al Qahtani, an urgent need to radically transform the industry, rapidly, and across the board, without compromising safety and the environment.

He outlined five areas that are critical for delivering transformation: innovation, the financial bottom line, cost management, technology, and talent.

Al Qahtani stressed that innovation defines the history of the oil industry, and its current success, concluding, “It’s why I’m confident that we, inside the industry, will lead the radical and rapid transformation that’s essential to secure our future.”

MEOS 2017 attracted a record number of submissions and more than 270 papers were presented during 50 technical sessions, covering topics related to reservoirs, production and facilities, exploration, drilling and completions, project management and human resources, among others.