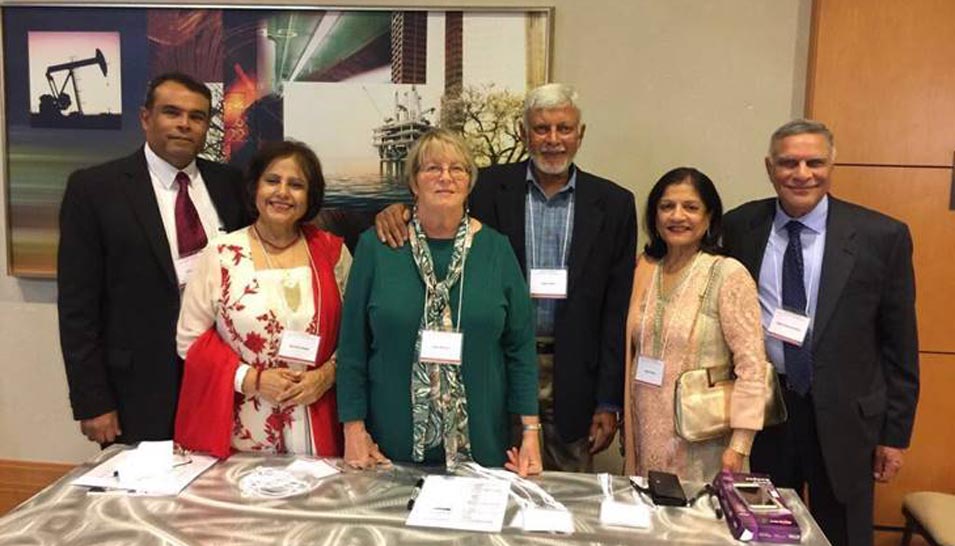 NED69ers 7th Reunion was held in Houston, Texas on November 10 - 12 2017. The event was hosted by the local NED69ers Committee headed by Engr. Jawaid Saeedi and assisted by Engr. Abdul Majid Adam and Engr. Moin Khan and their spouses. The host Committee put forth a tremendous effort to host the event.

A total of thirty NED69ers attended the function around sixty guests in attendance including the spouses and other invited guests.

A nice get together was arranged at Engr. Jawaid Saeedi’s house on Friday with a sumptuous BBQ dinner with both Texan and Pakistani Halal cuisine. The host committee spouses made the evening a memorable event by arranging a lively interactive program. They held quizzes, shared jokes, told stories and their experiences in old memory lane in informal settings. Some of the guests stayed past mid night.

Engr. Shahid Qureshi who came all the way from Pakistan and Engr. Kersi P. Edulji who was visiting his daughter in USA attended the reunion first time. All the guests stayed at Embassy Suites Hotel which allowed them to have breakfast together on Saturday and Sunday and socialize. After breakfast people divided in small groups and did shopping or local attractions sightseeing or visit relatives and friends.

In the evening of Saturday a formal get together which arranged. The event was started with the recitation from the Holy Quran by Engr. Abdul Majid Adam with the translation, short speeches by Engr. Jawaid Saeedi, Engr. Moin Khan and Engr. Abdul Majid Adam. Engr. Jawaid Saeedi mentioned in his speech about the donations for the renovation of the NED City Campus as per the request from Prof. Dr. Noman Ahmed, In charge of the City Campus. Further Jawaid mentioned the names of the deceased 69ers it was followed with a very touching speech by Engr. Dr Khalid Razaki which included a poem. This poem was included in an eulogy put together for Late Engr. Ahmad Haroon in 2010. It was a stark reminder to all of us of mortality and importance and value of our friendship.

Later the keynote speaker Engr. Ashraf Habibullah addresses the audience. As usual Ashraf electrified the audience with his humor, songs and genuine friendship and fondness of his classmates. Thanks to Ashraf for his continued support and friendship.

All the participants enjoyed a first class dinner, which had a vast menu. This followed an excellent entertainment program by local singers. The evening was delightful and we all thoroughly enjoyed the songs both in quality and variety. Alhamdulillah I have been blessed to attend four out of the five last events and have different entertainment groups have been refreshing. At a personal level entertainment is a small attraction for all the participants; the real value is the get together, friendship and love for each other.

Sunday morning was spent together during breakfast before all left for their homes. Overall we all felt that all who attended were treated to a highly organized and well planned event. As was decided earlier to empower the local host committee is a good idea, since it brings new ideas, new perspective, brings enthusiasm, and enlarges the experience of being involved. Overall it is a good thing to do for future events.

In the NED69ers 7th Reunion we all missed few North America based 69ers who could not attend.

The next venue will be Pakistan in Jan/Feb 2019 to celebrate the 50th Graduation Anniversary. The Host Committee is not yet formed but will be active very soon.

Last but not the least Special thanks to the Host Committee for their efforts in providing the memorable event. The two memorable days we all spent in Houston would not have possible without their selfless efforts.