Off and Running in The Hague 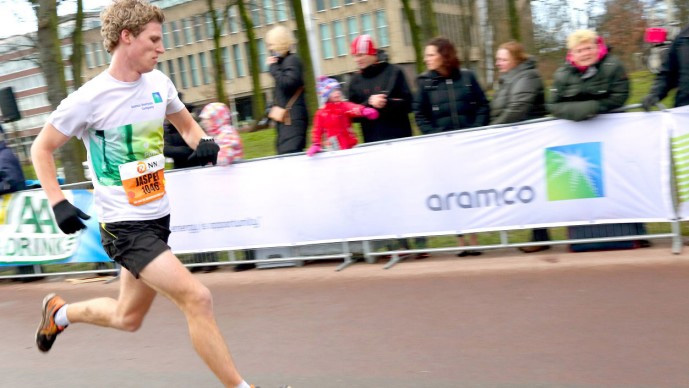 A young runner at the City-Pier-City Run at The Hague checks his time as some of the 140,000 spectators cheer on the competitors

The 42nd City-Pier-City (CPC) run at The Hague recently took place with more than 41,000 runners taking to the city streets for one of the largest sporting events in the Netherlands.

The Aramco sponsored event saw runners of all fitness levels, from amateurs to professionals, participating in a variety of races, including the 10K, 5K, children’s runs, and the half-marathon. The runners were cheered on by 140,000 spectators, who took to the streets to show their support.

Professional runner Edwin Kipyego of Kenya won the half-marathon with a time of 1:00:27 to become the new world season leader. He was closely followed by Stephen Kibet, who finished second in 1:00:33, and 2014 and 2015 CPC run winner Abraham Cheroben, who came third with a time of 1:00:35.

For the fifth year, Aramco was a major sponsor of the event, sponsoring 1,500 university students from around the Netherlands for the Aramco Student Run and the Aramco Student Home tent. Promoting an ethos of ‘healthy body and healthy mind', Aramco’s continued involvement in the event provides the opportunity to energize young talent.

Prizes sponsored by Aramco were presented to the three fastest students in male and female categories for the three distances. The fastest male runner in the 10K was Roeland van der Harst, who crossed the finish line in 34:50. A sports management student at The Hague University, van der Harst ran the fastest 10K time since the CPC Student run began in 2012. He has been running short distance marathons since he was six, but admitted, “I was struggling the last 2K but was able to pull myself through to the end.”

Aramcons and Friends Team Up to Help

As part of our commitment to citizenship, 80 AOC employees, family, and friends took part, competing both as individuals and teams in the various races. Volunteers also provided support to runners in the Aramco Student Home tent, ensuring that all participates safely completed the race. Students came from universities throughout the Netherlands, including Leiden University, a CSR partner of Aramco, and TU Delft, which is home to an Aramco research center.