How many of you readers can recognize the sound of a safety relief valve popping? Aramco annuitant Dr. Mohammed Ifteqaruddin, Badge Number 140948, can. For thirty-three years, Mohammed dedicated himself to issues relating to safety relief valves at facilities throughout the Kingdom, beginning in 1977 when he joined the Ras Tanura Refinery Maintenance Department’s Machine Shop as a maintenance machinist. By the time of his retirement in 2010, Mohammed had risen to the position of Technical Advisor of Mechanical Services.

While in Arabia, Mohammed lived in the Radwa and Najmah compounds as well as in the local communities of Rahima and al-Khobar. Since retiring, he founded the Saudi Aramco Ex-Employees Association, based in his home city of Hyderabad, India. Today he serves as General Secretary of SAEEA.

Mohammed’s fine reputation in his field has endured into his retirement years. Thanks to his association with Aramco and the exceptional knowledge he gained working in the Kingdom, he was asked to provide maintenance training to an international client in Bintul in the central region of Sarawak, Malaysia. Mohammed explains:

“Seven years after my retirement from Saudi Aramco, I accepted this challenge and flew from India to Kuala Lumpur and then to Bintulu. I stayed at the facility and provided training to young technical staff members for five days. I delivered it in a professional way, the way Saudi Aramco taught me. I salute Aramco from the bottom of my heart for the gift of technical knowledge they gave to me. The trainees enjoyed the training, receiving well the information I provided to them. Upon completion of the assignment, before returning home to Hyderabad, India, I had a chance to visit the famous Petronas twin towers in Kuala Lumpur. They are beautiful buildings and a landmark monument of Malaysia.” 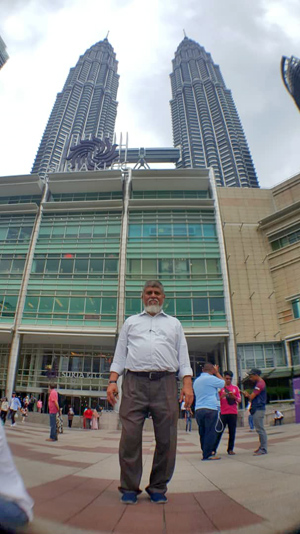 Mohammed Ifteqaruddin outside the Petronas
towers in Malaysia

The Arabian Sun ran an article about Mohammed on the occasion of his retirement in June 2010. We quote here excerpts from that article:

“Mohammed was delighted when he received an offer to join the world’s largest oil company in 1977. He started with the Ras Tanura Refinery Maintenance Department’s Machine Shop Unit in the Safety Relief Valve Segment as a maintenance machinist.

“He said he has enjoyed his work. ‘There were ups and downs, but there were also new developments,’ he said. ‘It was an honor for me to train young Saudi technicians and engineers in this field.’"

“Mohammed traveled all over the Kingdom as Saudi Aramco’s first safety relief valve test conductor, certifying relief-valve technicians. He said he learned a lot through the management courses offered by the Leadership Center.

“He said the most challenging job for him was in-place testing of boiler safety valves during midday on top of the boilers amid tremendous noise with super-heated valves popping. He has participated in several technical exchange meetings and forums."

“Mohammed says he will miss Saudi Aramco and most of all will miss the sound of a Safety Relief Valve popping.”

On the occasion of Mohammed’s retirement, Aramco CEO and President Khalid A. Falih wrote to him personally. recognizing his many valuable contributions to the company:

“Thank you, Mohammed, for your kind message and for your loyal and dedicated service to Saudi Aramco over your long career. I have personally seen over the years your commitment, dedication and loyalty and know you will be dearly missed. Best wishes for a happy and prosperous retirement. Khalid.”

In a recent article, AXP recognized the importance of the contributions Aramco annuitants have made over the years to the company, the Kingdom, and the people of Arabia teaching Saudis the nuances of their particular areas of specialization. Dr. Mohammed Ifteqaruddin’s career with Aramco, and the valuable work he has done in retirement, is an outstanding example of this.

Readers can reach Mohammed via email at: [email protected].