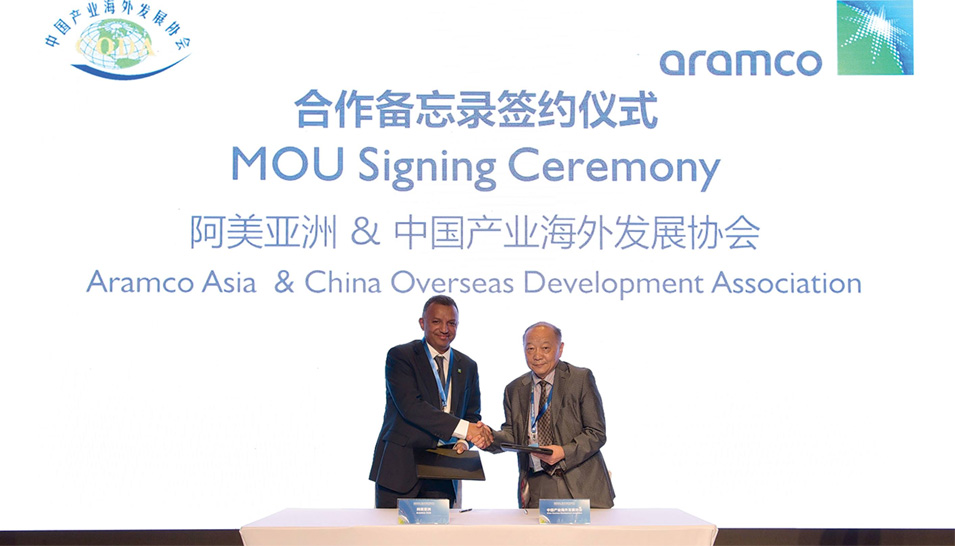 Aramco Asia president Anwar Al Hejazi, shakes hands with Hu Weiping, chairman of the China Overseas Development Association (CODA), after signing an agreement with CODA to promote iktva and investment opportunities in the Kingdom at the Suppliers Forum in Shanghai. Al Hejazi emphasized the importance of these forums and Aramco Asia’s commitment to support iktva by working with key suppliers across Asia to attract investments into the Kingdom and enhance the development of a diverse, sustainable, and globally competitive energy sector in Saudi Arabia.

Aramco Asia recently organized a series of events in the Asia-Pacific region to promote Saudi Aramco’s iktva localization program and attract Asian investors and suppliers to invest in the Kingdom.

Aramco Asia president Anwar Al Hejazi emphasized the importance of these forums, noting, “Aramco Asia is committed to support iktva by working with key suppliers across Asia to attract investments into the Kingdom and enhance the development of a diverse, sustainable, and globally competitive energy sector in Saudi Arabia.”

A one-day Suppliers Forum held in late August in Shanghai — China’s financial hub where Aramco Asia’s strategic procurement and logistic business is based — attracted more than 300 participants representing more than 200 government and semi-government agencies, industrial associations, and companies in China to explore iktva localization opportunities and investment in Saudi Arabia.

The event was also attended by Mohammed Al-Otaish, Commercial counselor at the Royal Embassy of Saudi Arabia in China.

Speaking to Chinese suppliers at the event, Aramco Asia-China country manager Fahad Al Othman underscored the importance of the forum.

“I strongly believe that we need to work closely in the next couple of years to consolidate our investment relations,” Al Othman said. “I think that further alignment between Saudi Vision 2030 and China’s Belt and Road Initiative presents to us an unprecedented opportunity to cement our investment ties and ensure Chinese investors to have fair, favorable, and transparent treatment in the Kingdom.”

At the forum, the company signed two separate agreements with the China Overseas Development Association and TEDA Investment Holding Company Limited to collaborate to advance the iktva program and explore investment opportunities in the Kingdom by bringing potential Chinese investors to Saudi Arabia.

Under the theme of Issho-ni, the Japanese word for together, the Tokyo forum held in early July brought together a total of 160 delegates from more than 90 local companies.

Aramco Asia-Japan representative director Omar Al Amudi remarked that Saudi Aramco has a proven track record as the leading energy company in the world, dealing with companies around the globe.

“Japanese companies have been an integral part of the Saudi Aramco story, from building our most complex facilities to supplying the most advanced technologies. Engagement in iktva has become more important for us to deepen our relationship and solidify our commitment with you all,” Al Amudi said.

Abdulrahman Al Hatlan, head of Aramco Asia’s Strategic Procurement and Logistics Department, emphasized the importance of such forums, noting that promoting iktva and attracting key Asian suppliers to invest in Saudi Arabia is a key priority.

“These two suppliers forums, along with the one planned in India later this year, serve as a platform to strengthen our ties with Asian suppliers and promote to them the available opportunities and incentives in the Kingdom,” said Al Hatlan.

Positioned as one major ingredient of the Company’s drive to enhance iktva, these pan-Asia events are specifically tailored for local investors and suppliers, and all parties are encouraged to share ideas and focus on collaboration for mutual prosperity.