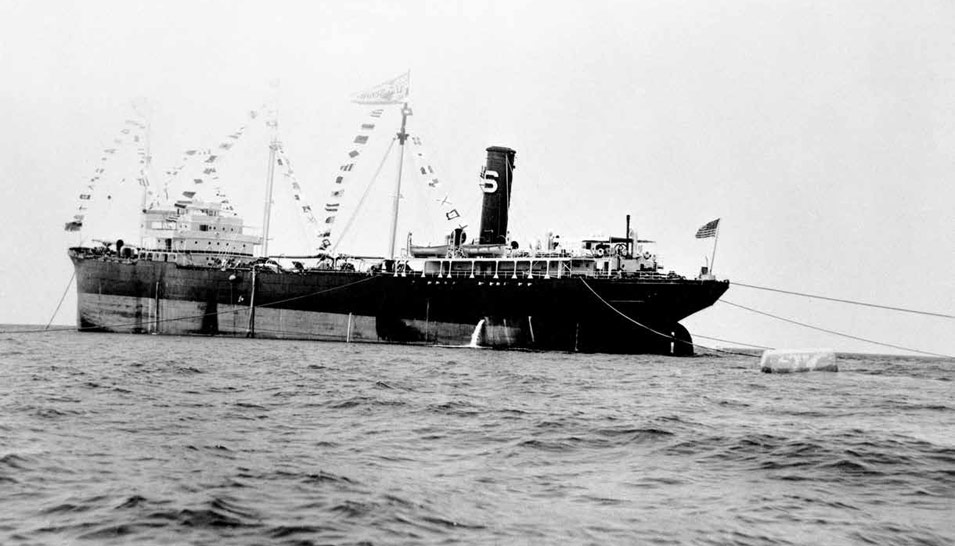 Eighty years ago, on May 1, 1939, Saudi Arabia’s founder King ‘Abd al-’Aziz Al-Sa’ud personally turned the valve that allowed oil to flow into the tanker the D.G Scofield, anchored off Ras Tanura.

With the turning of his hands, King ‘Abd al-’Aziz connected Saudi Arabia to the industrialized world.

It was a major event for the Kingdom. The royal companions and guests of the King numbered nearly 2,000 people and they had traveled in more than 400 cars from Makkah, Jiddah, and Riyadh. For several days, 350 tents were erected near Dhahran for events, tours, dinners, and speeches. 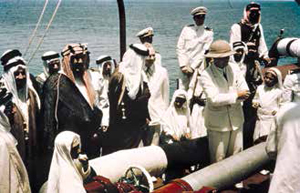 King ‘Abd al-’Aziz Al- Sa’ud readies to turn the valve allowing oil to flow onto the D.G. Scofield that would carry the first oil shipment directly from the Kingdom — a pivitol moment in Saudi Arabia’s history.

The visit — the first by King ‘Abd al-’Aziz to Aramco — was a truly epic event. When Dammam Well No. 7 had stuck oil in commercial quantities one year earlier, no infrastructure was in place in order to ship oil to global markets.

Ras Tanura, with its deep water and sheltered bay, was identified as the perfect location to receive tankers. Pipelines and storage tanks were built, along with other required infrastructure.

The King arrived in Dhahran on April 28 and was welcomed by two days of banquets and inspections. He also personally received in his great pavilion tent all of the women and children. At Ras Tanura on May 1, telegrams of congratulations were read, gifts exchanged, and King ‘Abd al-’Aziz opened the line through which wealth, power, and global responsibilities would flow into his young Kingdom.

Now 80 years on, approximately one out of every eight barrels of oil around the world is produced by Saudi Arabia. The Kingdom is a leading economic nation and a member of the G20.

The Ras Tanura terminal that welcomed King ‘Abd al- ’Aziz has seen billions of barrels of oil loaded onto tankers and delivered to customers around the world, helping power global economies and enable greater prosperity and mobility.