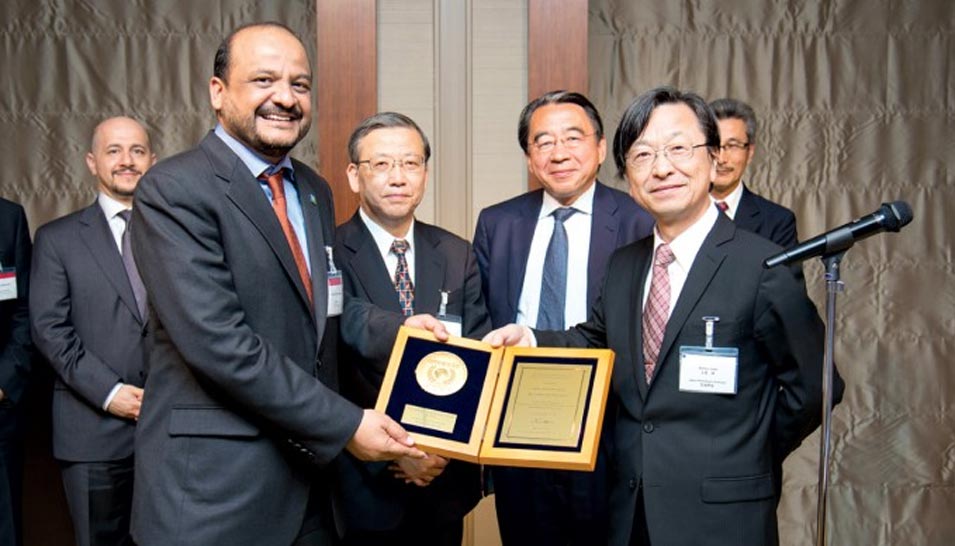 Saudi Aramco and its Research and Development (R&D) collaboration partner, JGC Catalysts and Chemicals — a leading catalyst developer and manufacturer in Japan — have been awarded the 2015 International Technology Exchange Award by the Japan Petroleum Institute (JPI).

Each year, JPI honors the best scientists, projects and institutions. Recognized in Japan and worldwide for the quality they represent, the JPI awards, including Best Society, Best Paper, Best Technology Progress, Best Incentive Project, and International Technology Exchange Awards, appreciate the scientific contributions made in petroleum and relevant fields.

During a visit to Japan to attend the Saudi Aramco and JCCP joint symposium on “Unlocking the Potential of Fuel to Enable Energy Savings and Emissions Reductions,” which was held in Tokyo, Saudi Aramco chief technology officer Ahmad O. Al Khowaiter received the JPI International Technology Exchange Award on behalf of the company.

“I am extremely pleased with the work we’ve done on CAN-15, creating a catalyst that’s the first of its kind,” said Al Khowaiter. “I look forward to the many commercialization opportunities this technology will avail.”, he said.

The collaboration began in 2007 to develop a catalyst system for the Riyadh Refinery hydrocracking unit, targeting extended catalyst life while increasing or maintaining distillate yields and quality. The R&D phase of the project was completed in 2010, with four of more than 80 potential catalysts developed and identified for scaleup and commercialization. The developed catalyst, Novel Heavy Oil Hydrocracking Catalyst (CAN-15), was deployed at the Riyadh Refinery hydrocracking unit. It has been in operation for two years, and its performance exceeded expectations yielding additional valuable distillate volumes.