Scenic Beauty on the Trail to Tabuk 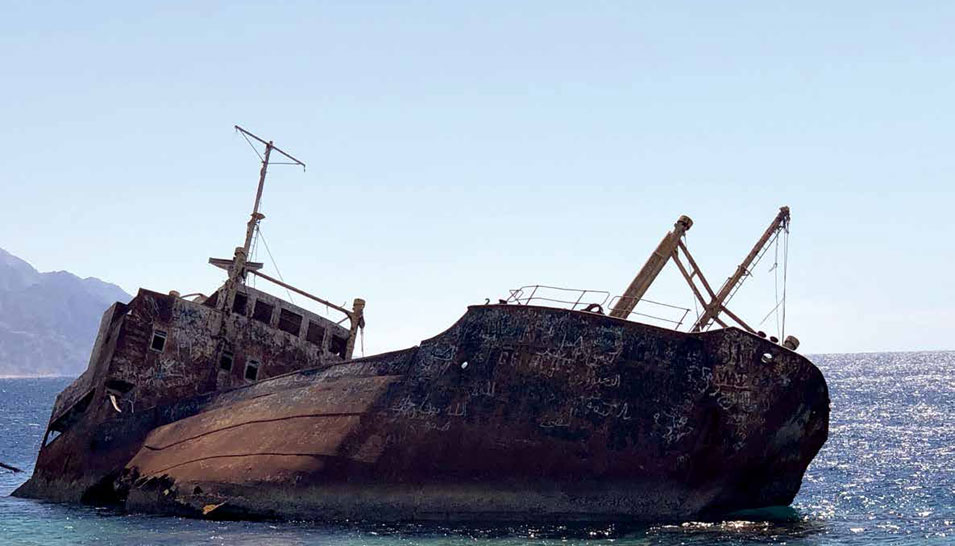 The wreck of a Greek vessel that sank about 40 years ago rises off the shores of Al Backera in Tabuk. Sometimes called the “Saudi Titanic,” the ship had a difficult time navigating a narrow strait and grounded itself. Today, it provides one of the iconic landmarks in the beautiful region of the Kingdom.

With a brief stopover in Riyadh, the Tabuk region can be reached easily by a domestic flight.

The roads that lead to the coast are dotted with variegated mountain ranges, the colors of the desert evolving through myriad hues, from the rocks on the ground to the red toward the more defined mountain peaks — all of this providing a strong contrast to the blue sky.

Small clusters of purple flowers sprout sporadically across the red sand in these plunging valleys at the base of the range, all of it offering truly breathtaking views. In some places, it is possible to diverge from the beaten path and onto short off-road routes that feature prehistoric sites. Here, the story reveals itself among marvelous wild coves.

As the Red Sea finally comes into view in the distance, one is immediately struck by the crystalline color of its waters, a contrasting intense shade of blue. Heading toward the Gulf of Aqaba, what is striking is that beyond the sea, the gaze cannot escape to the horizon as it is blocked by the Egyptian Sinai mountain range. The coastline is still wild and follows a winding path following the majestic rocks overlooking the sea, on which the rolling waves break.

There are two well-known sites linked to the stories of two very different wrecks.

The Tale of the PBY-5 Catalina 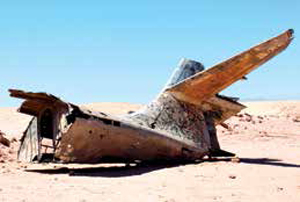 The debris of the PBY-5 Catalina rests on the sandy cape of Ras Al-Sheikh Hameed.

Resting on the sandy cape (Ras Al-Sheikh Hameed), which lies on coral reefs, the wreckage of a PBY-5 Catalina rises starkly. The former American military airplane was landed on this beach in March 1960 by its owner, businessman Thomas Kendall, who decided to stop there during his tour around the world with his children and his secretary.

They spent the night there, but the next day they suffered an armed attack by a group of Bedouins, who thought they were under a military attack. The pilot tried to restart the Catalina but he failed because of the shooting. The crew was captured by the Bedouins and brought to Jiddah, and the airplane was abandoned. An adventure that ended badly, today the Catalina is still there with its rusty debris bathed in light tides.

A Mystery Ship at Al Backera 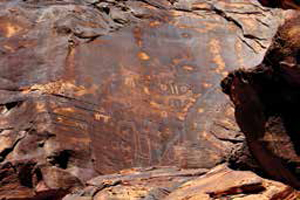 Writing and artwork adorns a rock outcropping in the hills of Tabuk.

Al Backera or Al Mashee Well is a pristine beach with crystal clear deep turquoise water that hosts a mysterious half-sunken ship. A Greek vessel that apparently hit the reef and sank about 40 years ago, the ship was of English origin and built during the Second World War.

Launched as a cargo liner, a Greek company bought it to carry flour. However, the crew had a hard time maneuvering the ship out of the narrow strait, and it was doomed. A Saudi businessman later bought the ship, but it caught fire. The flames lasted for several days, and only the metal hull was saved. The ship, sometimes called the “Saudi Titanic,” remains in its final resting place to this day.

This journey was filled with so many different adventures, landscapes, and colors. It is about ancient and more recent stories, and in my memory, I keep the image of the wild nature that covers and uncovers different scenarios — another spectacular Saudi Arabian adventure.