Shaping the Future of Pipelines with Nonmetallic Applications

by Anwar Parvez and Abdulaziz Asiri 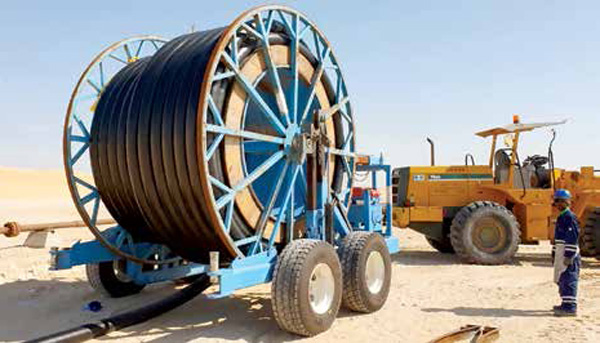 Nonmetallic products are shaping the future of oil production pipelines in the industry that typically relies on steel.

In oil and gas production, water is typically used as an injection fluid. The corrosion that is caused by water to the conventional steel pipelines is a major issue for the oil and gas industry, as corrosion compromises the integrity and reliability of the pipelines over time. Nonmetallic pipelines, immune to corrosion, make them an ideal product to mitigate this issue.

One of the high-impact nonmetallic products in oil production pipelines is reinforced thermoplastic pipe (RTP). The first RTP deployment by Saudi Aramco was successfully installed in Khurais in 2015.

The reliability and track record of the initial deployment set the ground for many other nonmetallic RTP projects for the company. The Consulting Services Department (CSD) nonmetallic team has worked closely with several vendors to expand the operating envelop of RTP to be used in high-pressure and high temperature applications such as water injection.

To avoid the cost of corrosion and any production interruption, CSD has assessed several nonmetallic products that could be used in higher internal pressure water injection applications.

However, steel-reinforced thermoplastic pipe (s-RTP) provides one of the most cost-effective alternative solutions to the traditional steel pipelines. The s-RTP is a nonmetallic pipe comprised of three layers — an internal layer, which acts as a bladder that contains the water, an intermediate layer, which reinforces the pipe structure, and an outer layer, which protects the pipe from any external damage such as wear and impact. Furthermore, spoolable s-RTP combines ease of installation –— requiring a smaller crew — and a longer operational life, making s-RTP the material of choice for this application.

Until 2015, only small diameter sizes of RTP — up to 4 inches — were available for higher internal pressure and high temperature applications. CSD worked with several manufacturers to entice the development of larger diameter RTPs for Saudi Aramco’s higher pressure water disposal and injection systems.

Based on this CSD initiative, two new piping products — 6 inch and 8 inch — were developed for Saudi Aramco water systems.

Realizing the benefits of the s-RTP in Saudi Aramco water disposal systems, CSD — in collaboration with the Sea Water Injection Department (SWID) — successfully deployed an 8-inch 3,000 psig rated pipe in water injection applications in Q4 of 2018. Deployment of this new product at SWID marked the first worldwide deployment of the largest diameter 3,000 psig rated s-RTP pipe.

Approximately 80% of the work needed to construct an equivalent steel pipeline was eliminated by utilizing this nonmetallic s-RTP product.

“The deployment of s-RTP in SWID represents a successful collaboration between CSD, SWID, and the manufacturer to develop a product that can meet the requirements of this challenging application,” noted Waleed I. Al-Otaibi, CSD Nonmetallic Engineering Division coordinator. “We will continue similar collaborations to expand the nonmetallic operating envelop and boost deployment in more oil and gas applications.”

Recently, a total length of 260 kilometers of s-RTP pipe was selected for various water system applications. With the increase in the demand for s-RTP products, extensive efforts are being exerted to entice manufacturers to localize the manufacturing of s-RTP in-Kingdom through In-Kingdom Total Value Add program.