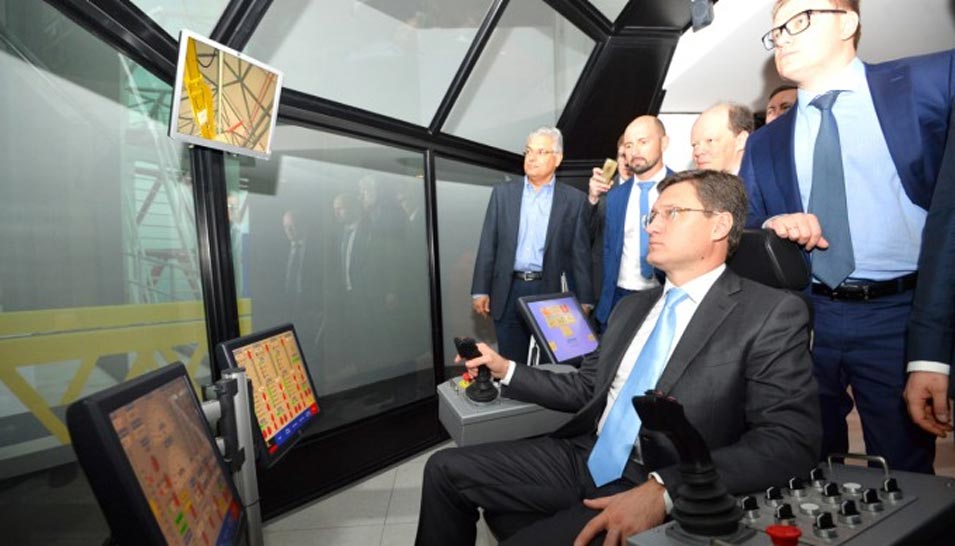 An exchange of experiences and mutual cooperation were the highlights of a visit to Saudi Aramco headquarters last week of HE Alexander Novak, the Russian Minister of Energy, and his official delegation.

Novak was welcomed by HE Khalid A. Al-Falih, the Minister of Energy, Industry and Mineral Resources for Saudi Arabia; Amin Nasser, Saudi Aramco president and CEO; and other company executives and management.

Saudi Aramco was the first destination on Novak’s schedule during his visit to the Kingdom.

In welcoming the Russian minister, Al-Falih said the visit was historic and would pave the way for enhanced relations between the two strongest oil and gas producers in the world. Novak thanked the hosts for the invitation and expressed his pleasure on the visit — his first to the Kingdom — which he described as important.

He noted that despite the climates in the Kingdom and Russia differing considerably, he was keen to share experiences. He said both countries could consider future cooperation, including the establishment of joint ventures.

In a presentation by Ammar A. Al Nahwi, manager of the Research and Development Center, the visiting delegation listened to a profile of Saudi Aramco’s business, future plans, and our role in support of the Saudi economy and the Kingdom’s Vision 2030. Al Nahwi highlighted the advanced technologies used by Saudi Aramco in Upstream operations designed to increase production and reduce costs. He also emphasized the company’s roles in research, environment, and citizenship.

Novak and the visiting delegation were also taken to the Oil Supply Planning and Scheduling (OSPAS) Department where they were briefed in the control room by Ahmed A. Al Subaey, vice president of Marketing and Supply Planning. The delegation was also taken on tours of the EXPEC Computer Center and Upstream Professional Development Center, among others.

They were also given aerial tours of company operations at Ras Tanura, Jubail, Ras Al-Khair, and Manifa.

The final destination for the visiting delegation were the sandy dunes of Shaybah, where Novak took the opportunity to speak with a Russian news channel regarding his visit. Novak also listened to presentations on Shaybah’s geography and wildlife, as well as the company’s efforts in maintaining and preserving both, to which he expressed his admiration. He also noted that oil exploration in Siberia faced similar challenges to those found in Shaybah.

The visit ended with a dinner held in honor of Novak, who stressed the importance of strengthening relations between the two countries.