Tahir H. Shaikh to Retire after 37 Years with the Company 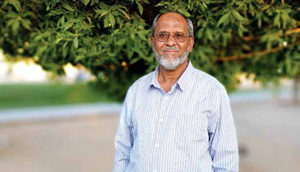 Tahir H. Shaikh, who has been with the
company for 37 years, will be retiring at the
end of the month.

Dhahran — Tahir H. Shaikh, an assistant engineer with the East-West Pipelines/Area-I Operations Division, will be retiring after 37 years of service to Saudi Aramco.

Shaikh, who joined the company in 1980 as a senior correspondence classifier in the Purchase Department in Dhahran, worked his way up to his current position. The longtime employee said there were many rewarding aspects to his career in Saudi Aramco, but said perhaps the most rewarding was “training young Saudis and later seeing them move into supervisory positions.” Prior to joining Saudi Aramco, Shaikh worked as a stenographer in the Reserve Bank of India, Ahmedabad, India.

During his stay in the Kingdom, Shaikh enjoyed exercising and swimming regularly, while his wife, Shaheena, enjoyed learning Arabic. The two have five children (Tooba, Mohammed Mubashir, Asiya, Yusra, and Ahmed) and two grandchildren (Khadeeja and Mousa).

In retirement, the couple will head back to Ahmedabad at the end of this month, where they plan to spend their time in social service, especially encouraging community members toward higher education and self-employment. The Shaikhs can be reached at [email protected] yahoo.com.