The Air Force Academy – A “Must See” in Colorado Springs 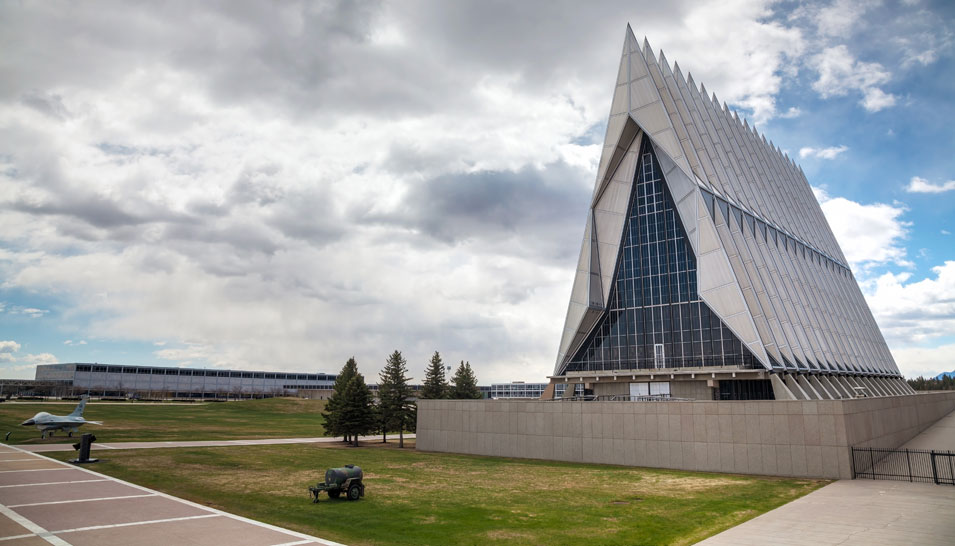 “Whether you’ve come to Colorado Springs as a visitor, cadet, parent or new member of our staff, one thing is certain—the United States Air Force Academy experience is unlike any other.”

With these words, the United States Air Force Academy advises visitors to its website to tour the campus for themselves, promising them an unforgettable experience if and when they do. For any AXP readers planning to attend next year’s annuitant reunion in Colorado Springs, you may want to take their advice and carve some time out of your schedule to mosey over to the academy for a look-see of your own. Like millions of curious people who have done the same over the years, you’ll be glad you did.

[Reunion organizers are working with Grey Line Tours to provide a unique, guided tour of the Air Force Academy. More details to follow.]

While the American military has been flying airplanes for over a century, historically speaking, the U.S. Air Force was not “born” until January 1947. Prior to that, it had been a part of the U.S. Army. During World War I it functioned as an arm of the U.S. Army Signal Corps, partly and logically in recognition of one of the earliest military uses of aircraft—for air reconnaissance of enemy forces. Between 1926 and 1941, it was known as the U.S. Army Air Corps (USAAC), its first step toward eventual independence. In 1941 it became the United States Army Air Forces (USAAF), a move that included the granting of still greater autonomy. Only in 1948, however, did it become the separate, distinct service within the U.S. military that we know today as the U.S. Air Force (USAF). W. Stuart Symington was named Secretary of the Air Force and Gen. Carl A. Spaatz was named the U.S. Air Force ’s first Chief of Staff that year.

Similar in its comparative youth to its parent service, the U.S. Air Force Academy is the newest of America’s service academies. Its relatively recent birth is evident in the stunning mid-century architecture of its buildings. One would never think of referring to the USAFA campus as “the Halls of Ivy” like in the old college song. Architecturally and visually, one might apply that term to the campuses of the eight Ivy League schools, or to the service campuses at West Point (founded in 1802) and Annapolis (founded in 1845), but surely not to the service academy in question at Colorado Springs (founded in 1954). Designed by the renowned architectural firm of Skidmore, Owings, & Merrill (SOM), the buildings of the Air Force Academy look and feel more like the Halls of Today and Tomorrow. In recognition of its unique character and place in history, in 2004, on the occasion of its 50th anniversary, the academy was granted national historic landmark status. Its design was indeed a landmark moment in the history of American architecture, setting a high standard for subsequent modernist campus design while breaking decisively from the ivy-clad traditions of the past. The Air Force’s current slogan is “Aim High.” They certainly aimed high with the design of their academy.

Competition among cities in the early ’50s to be chosen as the site for the proposed academy was fierce. Fortunately for the City of Colorado Springs and the State of Colorado, President Dwight D. Eisenhower’s wife, Mamie Doud Eisenhower, though born in Boone, Iowa, grew up in Colorado Springs and Denver, and the First Couple had vacationed there numerous times. Their affection for the Centennial State played a key role in the decision of the Military Affairs Committee—the body responsible for evaluating location options—to build at Colorado Springs. A visit to the USAFA’s remarkable campus with all of its manifest beauty confirms the aesthetic wisdom of their decision.

The first question one must ask themselves upon arriving on campus is, “Where do I begin?” The obvious choice for a starting point is the Barry Goldwater Air Force Academy Visitor Center. There one will find information on Academy history, cadet life, campus attractions, and other matters associated with the USAFA. There, also, one can pick up a self-guided tour map at the information desk.

Before embarking from the Visitor Center on a tour, visitors are encouraged to take in the movie highlighting the Academy experience shown throughout the day in the center’s theater. Visiting the center’s 5,652-square-foot exhibit area is perfect preparation for the campus journey that follows.

One of the first "must see” points of interest to visit is the Cadet Chapel, a third-of-a-mile walk from the Visitor Center along a paved nature trail. Designed as a symbol of inclusiveness, within its angular walls, the all-faith Cadet Chapel is home to individual chapels for Protestant and Catholic Christians and for other faiths as well. Its soaring design reaching skyward towards the heavens is an inspiration to all who view it, from afar and from within.

An interesting event, repeated three times a week during the academic year from 11:30 a.m. to 12:00 noon, weather permitting, is the Cadet Lunch Formation when the cadet wing marches to lunch. This formation is scheduled three days each week from 11:30 am-12:00 pm from mid-August through mid-May.

Stops at the various halls, the Honor Court, the Field House, and the Falcon Athletic Center provides insights into aspects of life at the Academy as cadets prepare for careers in the Air Force. Most of those halls bear the names of legendary figures from the rich histories of American military aviation and the Academy itself:

During visiting hours only (9:00 a.m.–6:00 p.m. daily), visitors lacking military or government ID cards are free to explore two memorable trails contained entirely within campus grounds. One, the Stanley Canyon Trail, is 5.8 miles long, features a lake, and is rated as difficult. The other, the Falcon Hiking Trail, is a singletrack loop bike trail that winds through academy grounds and features long climbs, thrilling downhills, and gorgeous mountain views. Both trails are controlled by the military and access to them requires proper ID or written permission.

By the time visitors have completed their tour of the academy’s grounds, they have developed a deep and lasting respect for both the academy itself and the Air Force it serves. Your visit to Colorado Springs for next year’s annuitant reunion is your chance to join their ranks.

The U.S. Air Force song begins with the lines, “Off we go into the wild blue yonder / Climbing high into the sun.” A visit to the Academy campus will leave you feeling that you’ve just done the same without having to leave the ground.