The Restaurant Where “13” Is a Lucky Number

If you're an Aramco annuitant, it's pretty much guaranteed that you like to travel. It's likewise pretty much guaranteed that you've discovered a local eatery or two in your various stops along the way that you welcome an excuse to return to whenever your journey takes you near. For me, the 13 Coins Restaurant across the street from the main entrance to Seattle-Tacoma International Airport fits that description perfectly. On many a trip through SEA, whether coming or going or sometimes both, I've made it a point to visit this restaurant's cozy confines to sate my appetite and slate my thirst. Here's why.

First, have you ever noticed how difficult it is to find good airport food? Too often, it's an oxymoron. While 13 Coins is technically not inside an airport complex, it's close enough to qualify for consideration.

Second, when traveling you often have no choice of your time of departure or arrival. Often you're in a rush, with little time to look for options. Plus, you're either about to subject yourself to airplane food on your flight somewhere or you're coming off a flight where your only meal (if any) was served by a flight attendant. Sadly, that's not always a recipe for a happy tummy.

Third, traveling can intensify your sense of adventure. So why not eat somewhere that will add to that feeling, not subtract from it?

On all three counts and more, 13 Coins comes through with flying colors (pun intended).

Open round the clock 24/7/365, "the Coins" as locals call it is always there to serve you anytime regardless of your flight schedule. Its extensive 24-hour menu offers, in its own words, "a dazzling array of breakfast, lunch and dinner items (including) benedicts and omelettes, continental favorites from filet mignon to salmon, comforting, approachable house specialties—and a seemingly endless wine list to complement…."

A double bucket of clams at 3:00 a.m.? Okay. Pan fried oysters at noon? Ditto. Escargots Chablisienne in the late afternoon? No problem. And those are just three of twenty or so starters. Add to that a dozen egg dishes and over twenty omelettes and "Della Casa" specials and you've made it through their breakfast offerings.

If you're a dedicated carnivore and would like to add a touch of green to your meal, ten different salad options can be matched with meat entrees ranging from six steak choices that include Pepper Steak Dijon, Steak David and Steak Sinatra, to three veal items, to calve's liver and onions and rack of lamb.

Of course, this being Seattle, there's an ample array of seafood dishes on the menu. Or you can choose one of their chicken entrees or one of their pasta and fettuccine dishes.

The list goes on and on, but you get the idea. 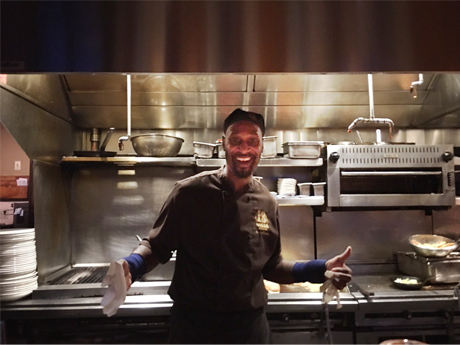 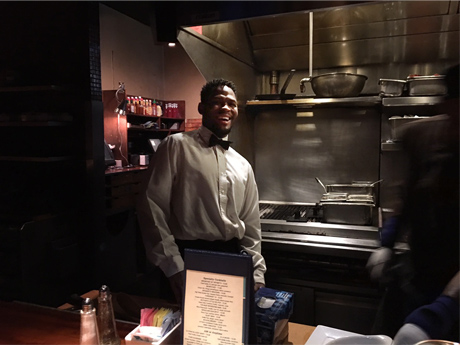 If you like healthy servings of distinctive atmosphere, great service and displays of kitchen pyrotechnics, the Coins has them all. There's a retro feel to their SeaTac location, which in 2017 will be celebrating its 50th anniversary. If you consider that one in five restaurants survives more than two years, and just one in twenty survives five, you will understand there's something distinctive about 13 Coins.

The atmosphere is decidely retro, and a visit is something akin to stepping through a time warp straight into the 1960s, with stuffed-leather seating, dim lighting, and white-clad waiters scurrying about. If you want to experience the full treatment, ask the maitre'd to seat your party in the high-back swiveling captain's chairs on the counter facing a long line of gas-fired grills where the kitchen staff performs a frenetic, dramatic ballet de corps preparing the food. In and of itself, that performance is worthy of a trip to the restaurant.

Watch in awe as the head chef barks out orders non-stop while his minions rush to and fro carrying out his commands. Look for flames erupting from the grills and take in the sizzling sounds and varied aromas of food being flame broiled. And don't forget to sample one of the select vintages from their extensive wine list. A dinner at the 13 Coins counter never fails to mesmerize me.

There's a lounge at one end of the restaurant where you can also grab a meal and, if your timing's right, perhaps listen to one of the touring jazz combos that perform regularly there. On a recent visit, the man at the keyboards sounded just like Les McCann as he sang "Compared to What." It wasn't McCann, but it was a worthy substitute.

I have friends who've been eating at 13 Coins almost from the day it first opened. They tell me that things have hardly changed in that time, and they like it that way. After making several dozen visits of my own, I've decided that I like it that way, too.

The next time you're flying through Seattle and can spare a few hours before, after, or in between flights, check out 13 Coins. I'm willing to bet you'll feel the same way.

P.S. The restaurant takes its name from the 13 coins that are embedded in the table tops of individual booths. So far, they’ve only brought me good food and drink and good luck.