The Rule of Life - Part Two

In the previous episode Tim and Milt thwarted in their attempts to learn about electronics, lift two Motorola portable walkie-talkies out of an unattended truck and set up their own clandestine radio network which predictably ends in ruin for the two miscreants. Life moves on, but so too does remorse. Contemplating our crime I began to think that Milt and I had done a great service to Aramco. Now all the radios would be more secure, or at least the windows rolled up and the truck doors locked. We were security consultants so to speak. I also knew that the law in Arabia was that if a man left his window down, his door unlocked and a bag of coins on the passenger seat, he was the criminal for tempting the thief. I was a Sharia law scholar before I even knew what it meant. We took good care of the radios, kept them in an air-conditioned environment and only turned them on for two minutes a day. It wasn’t such a terrible thing we did commandeering two walkie-talkies for the Jellyfish Liberation Front of Dhahran.

After a couple of months the contrition started to wear off too. I was being so good that I was boring myself to death and decided to return to the Rule of Life. I started roaming the alleys again. One day I happened to be walking up the alley between Eleventh and Twelfth Streets towards the swimming pool, the Fiesta Room and the rest of the forbidden zone, when I saw Milt duck into the head of the alley and hide behind a garbage can. An Aramco security car drove by. It was dramatic but I’m certain that the driver couldn’t have cared less about some kid crouching in the alley. I whistled to Milt and we met up.

Aside from school we hadn’t seen too much of each other. He was scouting the perimeter of the recreation block for ways to sneak in. Of course we didn’t know that everyone in Dhahran had completely forgotten all about our caper and we are free to go bowling, to the movies, swimming, to the Fiesta Room. No one cared.

In the back yard of a house on that alley an old African berry tree of some sort flourished. It must have been planted in the Forties, as it was more than 2 feet in diameter at the trunk and 30 feet tall. About 8 feet up, a foot-thick branch projected perfectly perpendicular from the trunk for about 5 feet before bending upward and a little over the back fence into the alley. We’d climb up the tree, scoot onto the limb and chatter like lemurs. We named it after the famous blimp, the Flying Cigar, which is where Milt and I adjourned to discuss our options.

In season, the Flying Cigar was covered with berries of some sort, red-golden fruit, maybe the size of cherries, that were heavenly sweet. However, it was difficult to discern between a ripe berry and a non-ripe. We were always wary because if you bit into a non-ripe you were doomed. It had a wretched bitterness, and your whole mouth puckered up like you had swallowed a handful of chalk dust. So Milt and I talked on the tree limb. We agreed that maybe electronics wasn’t our destiny but we’d find something else and remain allies in life. We each grabbed a berry and swore our friendship. We’d eat the whole berry regardless of how it tasted. We popped them into our mouths, bit down and tasted the sweetest berries in Arabia.

So a few days later, I’m at Milt’s house in the afternoon. It’s perfect. His parents are gone and there is no adult within a thousand yards. Milt’s room is decorated with his artifacts and discoveries. There is a deeply dented, steel hard-hat, a partially intact umbrella, a mangled road cone, a cracked green salt-tablet dispenser and of course the loot from behind the radio shop: A big cardboard box filled with a spaghetti nest of colored wires, buckets of radio tubes, and shoe boxes filled with switches, knobs and the pretty ceramic components that are color banded with wire leads at each end. We can’t help but run our fingers through the box of resistors and diodes that contain a secret that we’ll never know.

Then Milt says, “Look at this! I just found it in the alley behind Miller’s house.” He goes under his bed and pulls out a large cast-aluminum cylinder maybe 3 feet long and about 10 inches in diameter. There’s an electrical plug on one end. At the middle of the cylinder is a kind of foot-wide scoop-type cowling that flares out about 6 inches from the tube. It is an industrial cylindrical fan whose blades run lengthwise to blow air out of the scoop and onto to some critical piece of equipment. He couldn’t wait to show it to me. The fan weighed about 20 pounds and was covered in oily grime that apparently Milt didn’t notice when he dropped it on the white Chenille bedspread. He plugged in the fan and it hummed to life, pushing out a steady blast of air. It was cool in all ways.

But after a few minutes it was still a fan, so Milt, always the empirical scientist, says, “Let’s see what happens?” and picks up a ceramic capacitor the size of the tip of your little finger and tosses it into the scoop. There is this rattling sound from the fan as the component ricochets around within the housing and then comes spitting right back at us with the velocity of a Sandy Koufax fastball. It hits Milt right in the elbow and he howls in pain. I break out laughing. This is the funniest thing we’ve ever done. Milt throws in three small resistors, they clink around for a bit and then blast out like a shotgun and I get stung in the knee cap.

Standing against the far wall pitching small components into the fan cannon, we are having the time of our lives dodging flying shrapnel. We both wear glasses and most of the debris comes in at mid-torso to the knees, so to us this is a perfectly safe and acceptable activity. The thing about the fan was that if you got in closer to make your throw easier that fifty-ohm resistor would come flying out faster than you could dodge. What could be better?

We feed the fan for at least twenty minutes when Milt realizes that we have run out of components to pitch. He thinks for a moment and then brightens into a Eureka moment and says, “I have this.” He triumphantly pulls a cigar box off the shelf. It is filled with 2-inch stove bolts, nuts and washers. Perfect.

I toss in a washer. It clinks around in the fan and it clinks around some more before it fires. By some coincidence of nature the washer sails out in an arc like a Frisbee and clips the side of Milt’s glasses. Nothing could be better. The stakes are raised and the game is on. I have so much fun throwing in a bolt, hearing it clank around, never knowing when the fan is going to blast it back at me. And those bolts hurt when they hit you which makes the game all the more challenging.

Pretty soon we are in a frenzy, tossing in bolts and scampering like hell. Milt gets hit in the back with a nut I had tossed and falls to his knees where he is nailed in the wrist by a bolt he has just thrown. We are in tears laughing. I laugh so hard that I have to stop for a minute because my head hurts.

Milt likes to approach close to the scoop, lob in a bolt and then try to dodge it like a matador without moving his feet. I haven’t had so much fun ever in my life. Finally there is one stove bolt left. Milt tosses it in and almost immediately it comes hurling out of the scoop, misses us both and then makes a THWUNK when it hits the wall behind us.

For the first time that afternoon we turn to look at the wall. It looks like the Luftwaffe has strafed Milt’s bedroom. There is a chest-high, 5-foot wide band of destruction. The hundreds of tiny ceramic components have burst into colored powder marks on the wall sometimes leaving pieces of wire sticking out from the plaster. Embedded into the drywall at all angles, the stove bolts are really impressive. The walls are punctuated with dozens of deep, star-shaped dents from hurtling nuts and the occasional washer sunk in on edge. This wasn’t going to be covered up easily.

Then we look down at the floor. It is littered with thousands of broken, multi-colored ceramic pieces and a whole bunch of stove bolts, nuts and washers mixed into a fine plaster dust blanket. Considering our past history, this is a desperate moment.

So Milt slowly scans the room, the machine-gunned wall, the debris. He calibrates his odds of ever living through the day and says, “We better go to the Fiesta Room and have a hamburger.” And true to the Rule of Life we walk out of the house and through the back gate into the alley. 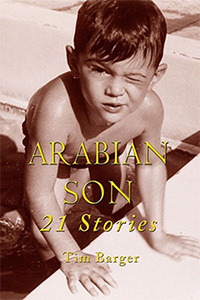