The Seven Natural Wonders of Arabia, Part I: Elephant Rock 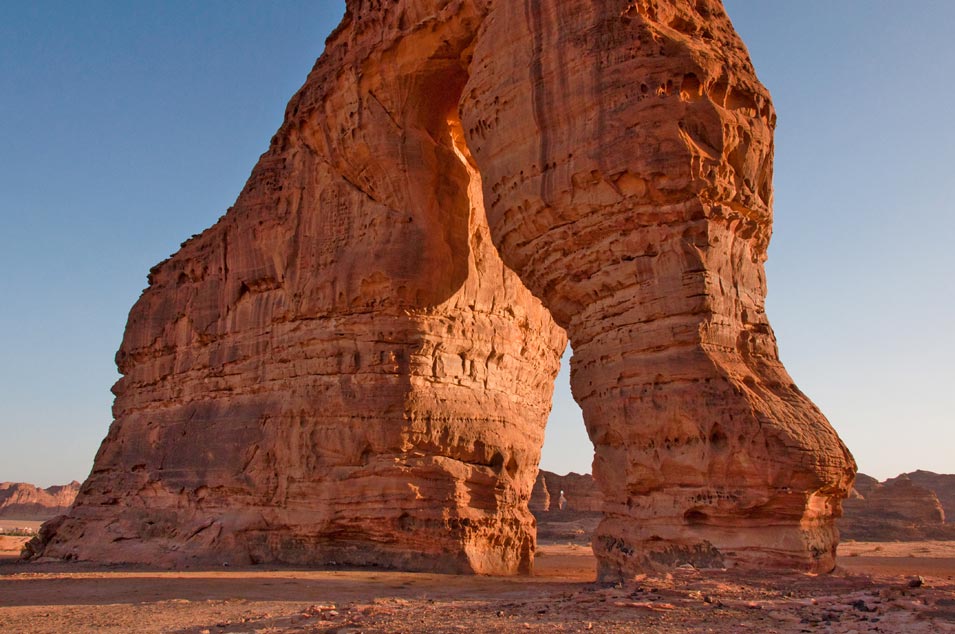 In November of last year we began our Seven Wonders of Arabia tour with a visit to Madâin Sâlih in the Al-’Ula region of northwestern Arabia—the Kingdom’s first inscribed UNESCO World Heritage Site. Two thousand years ago the Nabataeans made use of Al-’Ula’s other-worldly landscape to carve out that amazing rock city, often compared to Petra in Jordan. It is appropriate, therefore, that we begin our Seven Natural Wonders of Arabia tour with a visit to a close neighbor of Madâin Sâlih, Elephant Rock, a natural formation carved out of soft red sandstone by the natural erosive forces of wind and water over a period of millions of years located a few miles to the east of Madâin Sâlih. To paraphrase a common expression, visitors to Al-’Ula will be killing two Wonders with one stone—one made by man, one carved out by the hands of Mother Nature.

Standing upon gold-hued sands with mountains looming in the background, Elephant Rock (known to locals as Jabal Al Feel) stands 171 feet (52 meters) tall and owes its name to its uncanny resemblance to its namesake pachyderm—sans tusks—with its trunk touching the ground. Surrounded by similarly unusual rock formations likewise carved from solid rock by erosion, it serves as a powerful magnet drawing rock climbers, hikers, campers, and fans of other desert sports such as camel riding and offroading from all over the globe. Only recently has the world at large become aware of the wonders of Elephant Rock and its fellow monoliths. Together with Madâin Sâlih, it is expected to draw tourists to the area in ever-increasing numbers in the coming years.

In one of Elephant Rock’s more unusual features, erosion has carved out what appears to be an eye. Nearby stands a stack of stones known as Masha Allah that resembles in shape either a mushroom or a spinning top, depending on one’s viewpoint. A multitude of other ethereal, indescribable, other-worldly rock formations add to the wonder of the wadi, including sheer cliffs festooned with a rich assortment of petroglyphs dating back to prehistoric times. Persons knowledgeable in the ways of the area recommend that visits be timed to coincide with sunset, when the sun’s slanting rays intensify the visual effect of the rock formations.

In 1968, John Dayton, managing partner of a British company overseeing the reconstruction of the Hejaz Railroad that had been destroyed by Lawrence of Arabia half a century earlier, was using free time during a stop near Madâin Sâlih to visually survey petroglyphs on surrounding rock faces using a telephoto lens mounted on a tripod. He was astonished by what he saw:

“At the very top of the cliff was a smoke-blackened area covered with crudely drawn pictures of camels, wild goats, and a pair of hands. … As my eyes slowly travelled on down the smooth pink rock face, I almost dropped the camera with surprise. Not more than 1 ft. square, and at least 30 ft. above ground, was the engraved outline of an elephant. It was perfectly drawn with very long mammoth-like tusks.”

Elephants were not native to Arabia, but were known in ancient times owing to their use as weapons of war by the forces of Alexander the Great and Hannibal and others. The close proximity of that elephant engraving to Elephant Rock may be an indication that, thousands of years ago, humans recognized the monolith’s resemblance to those mighty proboscideans. One of the great attractions of the area is its dramatic mix of natural and man-made wonders like this.

The nearby city of Al-‘Ula—sometimes known as “The City of Lions”—is built around an oasis in Wadi Al-Ula, a tributary of Wadi Jizai, part of the verdant Wadi Al-Qura (“Valley of Villages”). The city offers travelers comfortable accommodations and an assortment of cultural activities to add texture to their visit. A popular place to stop is Al-Ula’s spice and Incense souk, where local handicrafts are on display in abundance and where one can enjoy music and dance and stage performances. Spices and incense have been an integral part of life at Al-ula for thousands of years since the hey-day of the spice and incense routes across Arabia linking mysterious lands to the east with the peoples of the Mediterranean basin.

Earlier this year, Amr Madani, chief executive of the Royal Commission for Al-Ula, announced a plan whereby the Saudis are seeking $20 billion in investments in the Al-’Ula region through the mid-2030s. Saudi Arabia itself is investing tens of billions of dollars of its own money into the development of tourism in the Al-’Ula region and elsewhere as part of the Kingdom’s Vision 2030 social and economic reform plan. Helping launch that initiative, last month Crown Prince Mohammed bin Salman initiated several major tourism projects centered on Al-’Ula, including a resort designed by renowned French architect Jean Nouvel and a nature reserve.

In the planned nearby development known as NEOM, the Kingdom hopes to build a futuristic city for residents and visitors to serve as a new hub between the East and the West. On the Red Sea Coast of NEOM, the government has announced additional projects designed to tap into the tourism potential of the area’s majestic coastline which until recently has remained largely untouched.

Madani estimated that, taken together, these initiatives will add $32 billion to the Kingdom’s GDP over the next two decades. Much of that growth will be inspired by tourism. Additional momentum will be generated by secondary industries such as sustainable agriculture, heritage preservation, and film production.