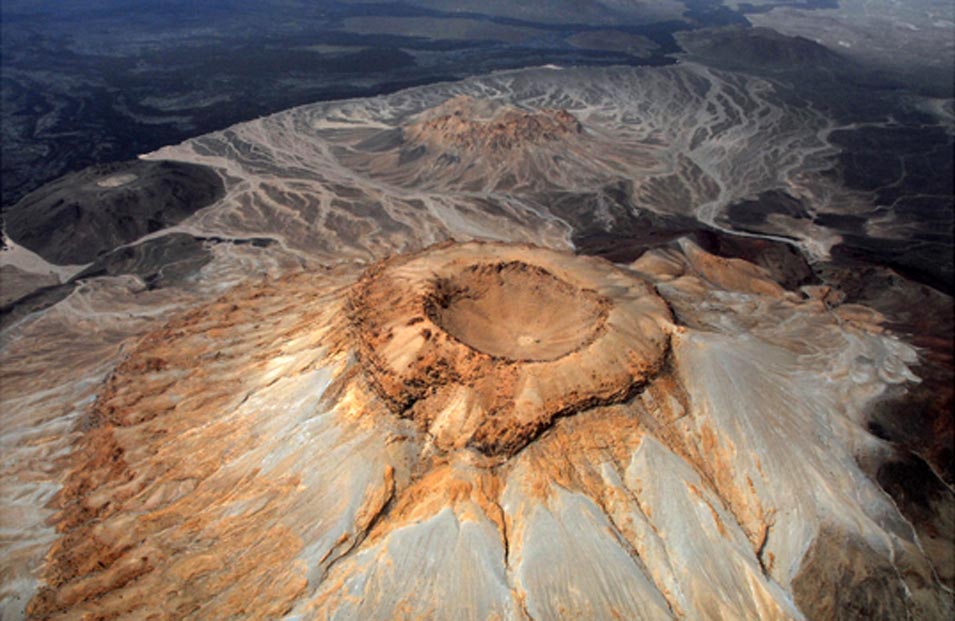 Last month we launched our new series on the Seven Natural Wonders of Arabia with a visit to Elephant Rock near Madâin Sâlih in the Al-’Ula region of northwestern Arabia. The second stop on our tour takes us south-southeast from there in the general direction of Madinah to Jabal Abyad—“White Mountain”—at 6,867 feet (2,093 meters) the Kingdom’s tallest volcano. From a certain distance and viewed horizontally in just the right light from land with a bit of imagination applied, Jabal Abyad could easily be mistaken by the casual observer for a snow-capped peak. It looks especially like one when viewed vertically from high above from an airplane or via a satellite camera. The alabaster hue of its white crater and slopes as seen from that overhead perspective is far more pronounced.

Don’t let appearances fool you, whether viewing Jabal Abyad from the side or from above. One is wise to heed the old saying, “Looks can be deceiving.” That’s not snow one sees cloaking the volcano’s shoulders and cone, but rather white volcanic ash, residue of a silica-rich felsic lava called comendite.

The closest match the Kingdom can offer to the dramatic symmetrical profile of Mount Fuji is the Jabal Qidr stratovolcano, a neighbor of Jabal Abyad located in the same vast lava flow, Harrat Khaybar. Given the black color of its slopes, Jabal Qidr will never be confused with its snow-clad counterpart in Japan. A perch high on the slopes of Jabal Abyad gives climbers an unobscured, unforgettable view of Jabal Qidr, of other neighboring volcanic peaks, and, in general, of the surrounding unearthly, otherworldly, dimpled moonscape. With its checkerboard of volcanoes, some black, some white, Harrat Khaybar is a stunning example of the earth’s majesty. 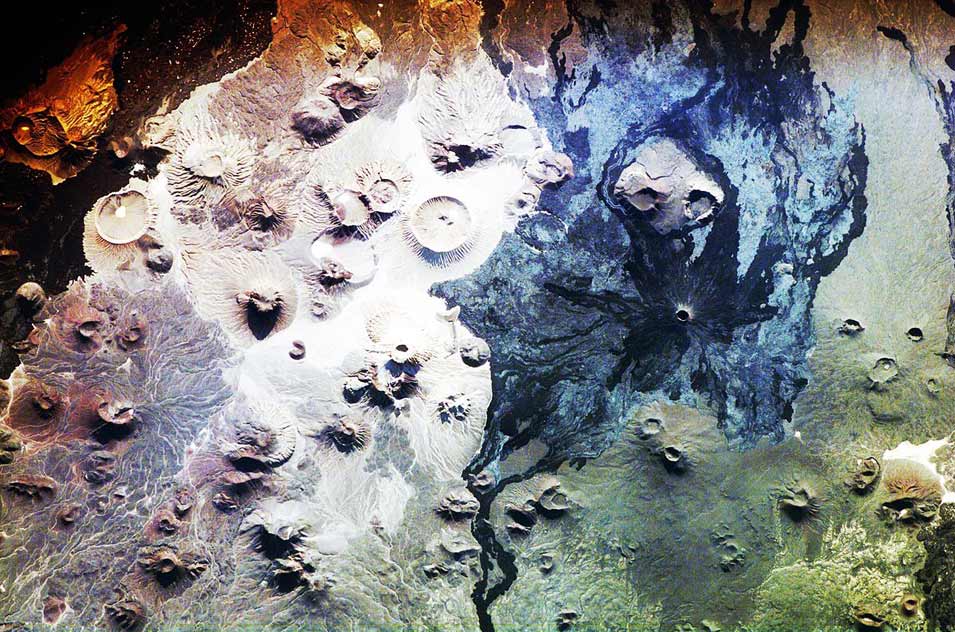 The richness and mysteries of Arabia’s geological history extend well beyond the black gold lying hidden deep below the surface, the same treasure that’s inspired generations of Aramcons over the years. The violent, titanic forces of continental drift, science tells us, have been converging on the Peninsula for aeons with spectacular results, many of them visible today. Concurrent with that convergence has been a recurrent stream of volcanism punctuating the Arabian Plate in a clearly discernible pattern. One manifestation of Arabia’s volcanic past (and present) is its many lava fields (“harrats” in Arabic).

The eldest among them, bereft of volcanoes owing to their age, date from the opening of the Red Sea 15 to 30 million years ago; the youngest date anywhere from 10 million years ago up to the Common Era. Generally arrayed in a north-south direction in western Arabia in rough alignment with the Red Sea coast, they boast a host of dormant volcanoes, any one of which is capable of springing to fire-breathing, smoke-and-lava-belching life with scant forewarning at any given moment. Over the past 4,500 years, 13 eruptions are known to have occurred on average once every 346 years—a blink of the eye measured in geological terms.

The most recent eruption on the Arabian Peninsula occurred in 1937 in north Yemen, and the next most recent preceding that in 1846 on a volcanic island in the Farasan group in the Red Sea to the northwest of there. More eruptions will surely come, maybe today, maybe tomorrow, maybe sometime after that, but certainly someday. Of that we can be certain. But who can say where or when? The candidate venues are many, while just about any year will do. Mother Nature has her own hidden timetable for such matters known only to her, and she’s reluctant to share her secrets. That hasn’t deterred determined geologists from continuing to try to unravel them.

They have concluded from multiple investigations that, taken together, this relatively new (geologically speaking) array of harrats and volcanoes and related features is conclusive proof that a fresh round of continental rifting activity is underway analogous to the forces released during the far older Red Sea rift. Check back in another 10 or 20 million years or so for an update. Only then will it be reasonable to speculate on the wheres and whens of the next round of rifting after the current episode has run its course.

Dramatic evidence of the earth’s molten fury at work assaulting the Kingdom’s landscape can be viewed in two large lava flows located within easy driving distance from the Holy City of Madinah. Eighty miles to the north lies the aforementioned Harrat Khaybar, whose most recent recorded eruption episode dates from the 7th century CE. Twenty or so miles east of Madinah lie the northernmost reaches of Saudi Arabia’s largest lava field, Harrat Rahat, stretching from there 180 miles southward to the suburbs of Jeddah. Hundreds of volcanic vents, scores of shield volcanoes, dozens of domes, and many hundreds of basaltic cinder cones pockmark the two lava fields. In the 13th century CE, Harrat Rahat was home to Arabia’s best known recorded volcanic eruption.

On Monday, 26 June 1256 CE (Jumada-II 1, 654 AH), the people of Madinah were startled by a deafening, thunder-like roar emanating from the direction of Harrat Rahat. The blast announced a series of escalating geological disturbances leading to a catastrophic event later that week. Preceded by a succession of increasingly strong tremors, a powerful earthquake struck that Friday (30 June), followed by an enormous volcanic eruption centered 20 miles to the southwest in the Harrat Rahat. Episodes of lesser eruptions continued intermittently for another 52 days. The night sky turned red with an other-worldly glow visible from Makkah, over 200 miles away. A 10-feet-thick, four-mile-wide river of red-blue lava (“a fire that moved like a flood” in the words of a contemporary observer) spewed forth from a great yawning fissure. Two new volcanic cones emerged, one at each end of the breach.

Advancing steadily, inexorably in the direction of Madinah, the magma incinerated, obliterated, and buried everything in its path. Rocks melted. Mountains crumbled. Anything green and growing disappeared. People feared that the end of the world was upon them. For over a month, smoke and ash obscured the sun and moon. The effects of the eruption could be seen as far away as Damascus, where the ash cloud it unleashed eclipsed the moon.

As that fiery stream approached Madinah, the caliph and faithful gathered in the Prophet’s Mosque, beseeching Allah to save them. Their voices were heard. A mere two-and-a-half miles away, the lava flow—by then 15 miles long—abruptly veered north, following the contours of the land and sparing mosque and people at the last possible moment. In the case of the mosque, the reprieve was short-lived. Later that year a fire of another sort destroyed it. The culprit this time was neither a volcano nor an earthquake nor a lava flow but rather one of the mosque’s lamps.

Eighty miles to the north of Madinah lies the aforementioned Harrat Khaybar, likewise a large volcanic field covering an area of 5,400 square miles (14,000 square kilometers) where the most distinctive volcanic scenery in all of Arabia can be found. Harrat Khaybar is home to a number of noteworthy “black and white” volcanoes, among them Jabal Abyad (translatable as “White Mountain” with “abyad” meaning white in Arabic in the word’s masculine form), our latest announced member of the Seven Natural Wonders of Arabia septet; Jabal Bayda (also translatable as “White Mountain” with “bayda” also meaning white in Arabic, but in its case in the word’s feminine form); and Jabal Qidr, Arabia’s black Mount Fuji . All three peaks are noteworthy and well worth visiting, given the proper preparations. Rare white volcanoes such as Jabal Abyad and Jabal Bayda are especially so.

Access to Jabal Abyad and its eruptive siblings is difficult though not impossible if you’re properly equipped and physically fit. That said, the experience is deeply rewarding. One advantage for those willing and able to undertake the trek is that there are fewer visitors to contend with owing to the difficulty of getting there. Another benefit is that smaller numbers of visitors have resulted in a much-diminished human impact on the volcanoes and their environs. Owing to Jabal Abyad’s remote location and dangerous surroundings, visitors are encouraged to take a full range of safety precautions. Extensive fields of knife-like rocks can inflict considerable damage on the ill-prepared.

Signs of neolithic life are scattered throughout the lava fields, including sites where ancients once harvested obsidian associated with white volcanoes and prized for use as cutting tools and weapons. Remnants remain of numerous stone structures, among them mysterious stone circles some compare with those of England and other formations thought to have once served as traps for capturing or containing animals. Still other stone structures are believed to have once served as burial sites. Bedouins have referred to those prehistoric inhabitants as “the rock people.” Those rock people left behind abundant examples of rock art as part of their enduring legacy.

Traces of their presence in what today are inhospitable climes speaks volumes for how this region was once upon a time verdant and watered and capable of supporting human life. Only the toughest of desert fauna and the most resilient of desert flora can survive current conditions there. Most notable of all the survivors are the Bedouins, who through the ages have proven themselves capable of enduring almost anything.

Few places on earth can match in magnitude the volcanic drama of Jabal Abyad. Difficult to reach though it may be, it well deserves a place on AXP’s list of the Seven Natural Wonders of Arabia. In October our journey will continue with a visit to the Edge of the World, another product of Arabia’s astonishing geological history located in the desert northwest of Riyadh.