The Seven Wonders of Arabia, Part I: Madâin Sâlih 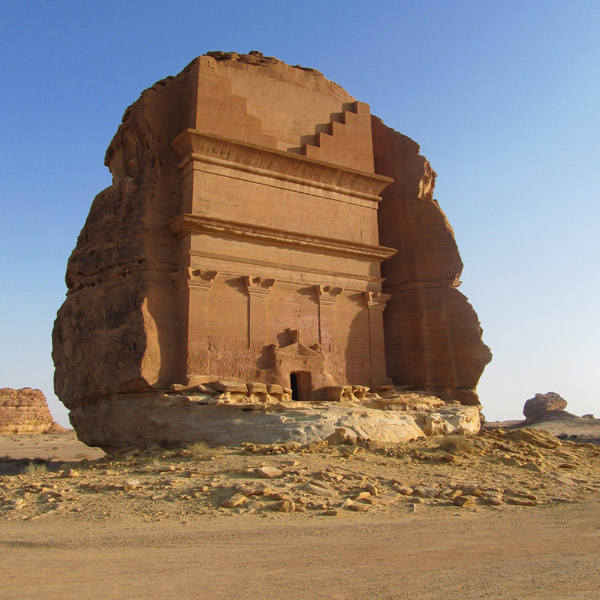 Not long ago, when we mentioned to an annuitant who’d lived in the Kingdom for close to 30 years that AramcoExPats was planning a series of articles on “The Seven Wonders of Arabia,” she asked the inevitable question most Americans seem pre-programmed to ask in such situations: “So, who’s Number One?”

Upon learning that we had several candidates in mind for top billing but hadn’t yet chosen a winner, she shook her head and commented, “Well, remember this if and when you finally do decide: The Saudi people are the Number One Wonder of Arabia.”

Realizing we could not possibly argue with that, we reprogrammed our thinking and asked ourselves instead, “Which are the seven best runners-up?”

The more we thought about her comment, the more it got us to thinking about the underlying wisdom of creating any such list in the first place. It forced us to recognize that all selection processes associated with list making are inherently subjective and subject to debate.

We opted to follow the lead of UNESCO, who in concert with the Saudi government has recognized three historical sites in the Kingdom as World Heritage Sites and nominated three more for consideration. That gave us six “Wonders” to work with, leaving it up to us to decide on a seventh. We have opted not to rate them against each other. Instead, we shall treat them in chronological order based on when they were chosen or nominated for inscribing on UNESCO’s WHS list. We’ll leave it to you, our readers, to decide for yourselves who’s Number One.

We begin our seven-stop tour of the Arabian Peninsula then with a visit to a Nabataean desert city with monumental buildings carved from rock which has often been compared with Petra. Located 300 miles south-southeast of Jordan’s signature attraction, not far from al-Ula in the Al Madinah Region of the Kingdom, Madâin Sâlih boasts 131 stunning rock tombs, a wealth of intricate ornamental carvings, and a Siq-like narrow canyon of its own.

In 2008, when Madâin Sâlih was named a World Heritage Site, the first site in the Kingdom to be so recognized, UNESCO had this to say about their choice:

“The Archaeological Site of Al-Hijr (Madâin Sâlih) is the first World Heritage property to be inscribed in Saudi Arabia. Formerly known as Hegra it is the largest conserved site of the civilization of the Nabataeans south of Petra in Jordan. It features well-preserved monumental tombs with decorated façades dating from the 1st century BC to the 1st century AD. The site also features some 50 inscriptions of the pre-Nabataean period and some cave drawings. Al-Hijr bears a unique testimony to Nabataean civilization. With its 111 monumental tombs, 94 of which are decorated, and water wells, the site is an outstanding example of the Nabataeans’ architectural accomplishment and hydraulic expertise.”

UNESCO uses 10 key criteria when evaluating a site for possible inscribing as a World Heritage Site. Investigators singled out Criterion (ii) and Criterion (iii) when recommending Madâin Sâlih for inclusion on the list.

Under Criterion (ii), a site is expected “to exhibit an important interchange of human values, over a span of time or within a cultural area of the world, on developments in architecture or technology, monumental arts, town-planning or landscape design.”

UNESCO investigators laid out their argument for Madâin Sâlih qualifying under Criterion (ii) in this way:

“The site of Al-Hijr (Madâin Sâlih) is located at a meeting point between various civilisations of late Antiquity, on a trade route between the Arabian Peninsula, the Mediterranean world and Asia. It bears outstanding witness to important cultural exchanges in architecture, decoration, language use and the caravan trade. Although the Nabataean city was abandoned during the pre-Islamic period, the route continued to play its international role for caravans and then for the pilgrimage to Mecca, up to its modernisation by the construction of the railway at the start of the 20th century.”

Under Criterion (iii), a site is expected “to bear a unique or at least exceptional testimony to a cultural tradition or to a civilization which is living or which has disappeared.”

UNESCO investigators laid out their argument for Madâin Sâlih qualifying under Criterion (iii) in this way:

“The site of Al-Hijr bears unique testimony to the Nabataean civilisation, between the 2nd and 3rd centuries BC and the pre-Islamic period, and particularly in the 1st century AD. It is an outstanding illustration of the architectural style specific to the Nabataeans, consisting of monuments directly cut into the rock, and with facades bearing a large number of decorative motifs. The site includes a set of wells, most of which were sunk into the rock, demonstrating the Nabataeans’ mastery of hydraulic techniques for agricultural purposes.

“The testimony borne by Al-Hijr to the Nabataean civilisation is of outstanding integrity and authenticity, because of its early abandonment and the benefit over a very long period of highly favourable climatic conditions.”

Madâin Sâlih has often been compared with Petra for obvious reasons, beginning with their monumental rock tombs. Yet, it differs from its Jordanian cousin in significant ways, in part because of the “highly favourable climate conditions” pointed to by UNESCO. 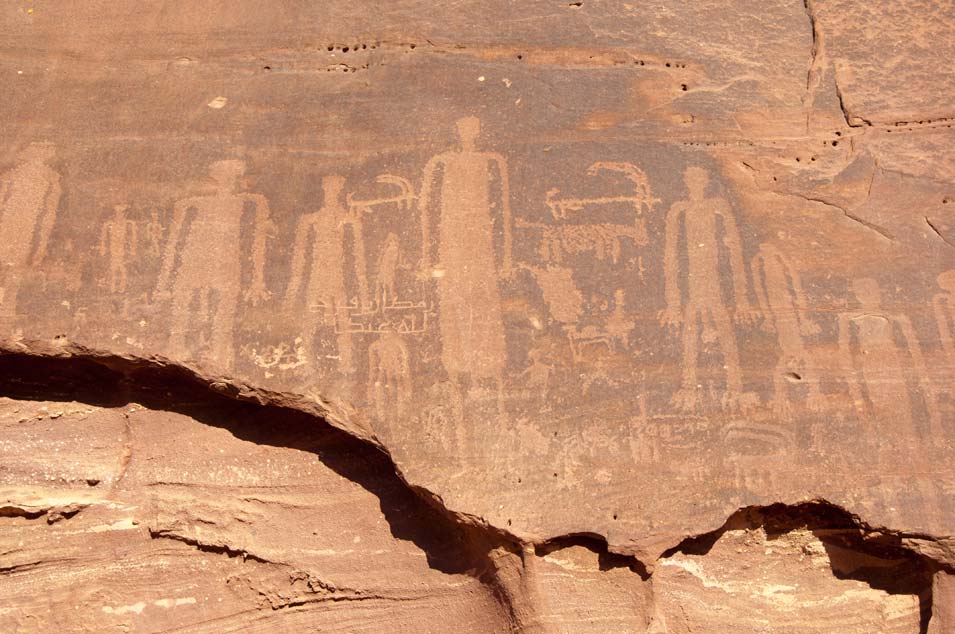 In winter, temperatures at Petra often fall below freezing, leading to freeze-thaw cycle damage. And, while there’s relatively little rainfall at Petra (less than 4” annually), there’s high humidity, with negative long-term effects on the sandstone. Temperatures at Madâin Sâlih, on the other hand, rarely if ever fall below freezing, and humidity poses much less of a problem. In all, the happy result for Madâin Sâlih is that its rock-cut monumental tombs and the stonework ornamentation of their façades are better preserved than are Petra’s. As well, that ornamentation is more ornate. In short, even if you’ve seen Petra, a visit to Madâin Sâlih is well worth your time.

Another advantage Madâin Sâlih has enjoyed over Petra through two millennia is its comparative isolation. Together, these favorable factors have resulted in the excellent preservation of its wonders, including a host of inscriptions written in various ancient languages— including some 50 inscriptions in Lihyanite script—something wholly absent from Petra.

The architectural styles seen at Madâin Sâlih reflect a blending of influences from Assyria, Phoenicia, Egypt, and Hellenistic Alexandria. The Nabataeans combined them into a distinctively original style of their own.

The water systems of Petra and Madâin Sâlih differ in significant ways. At Petra, the Nabataeans designed an innovative system to collect rainwater and store it in cisterns carved from solid rock. At Madâin Sâlih—located as it was at an oasis—they sank 130 wells, some of which remain in operation today.

For over two centuries, spanning the dawn of the Common Era, Madâin Sâlih served as a major staging post on the overland trade route linking southern Arabia with the Mediterranean basin. Caravans laden with precious goods like spices and incense regularly passed through its precincts. Less recognized today are the Nabataeans’ related maritime activities. Those activities had a direct effect on caravan traffic passing through Madâin Sâlih. A primary overland trade route linked it directly to the “lost” port of Leuce Come.

The Periplus of the Erythraean Sea (“Erythraean Sea” being the classical name for the Red Sea) written sometime between the first and third centuries CE, includes descriptions of extensive maritime trading activities along the Red Sea coast of Arabia. In one of its passages it describes that lost port:

“Now to the left of Berenice, sailing for two or three days from Mussel Harbor eastward across the adjacent gulf, there is another harbor and fortified place, which is called White Village, from which there is a road to Petra, which is subject to Malichas, King of the Nabataeans.

“It holds the position of a market-town for the small vessels sent there from Arabia; and so a centurion is stationed there as a collector of one-fourth of the merchandise imported, with an armed force, as a garrison.”

Debate continues to this day over the exact location of “the White Village” mentioned here, with several factions arguing strenuously in favor of their preferred candidates for the honor. One of the people making such an argument well ahead of most is a writer well-known to AXP readers: Bob Lebling. Since the birth of AramcoExPats 16 years ago, Bob has been a contributor of articles to our website and newsletter.

In 1979, long before AXP appeared on the scene, writing for the Washington Bureau of the Arab News, Bob asked the prescient question, “Where Was Leuce Come?”

“According to ancient writers,” he wrote, “Leuce Come was the jewel of the Red Sea, a bustling seaside market town that served as a key transshipment point for spices, gems and other goods en route to the Mediterranean from Arabia Felix or modern-day Yemen.

“But today, Leuce Come is counted among the world’s ‘lost cities.’ Contemporary explorers and archaeologists have been unable to locate the site of the fabled harbor town, despite various theories as to where it must have been. …

“The eventual discovery of ‘White Village’ will tell us much about the Nabataeans' role as a major sea-power—a role overlooked by most modern historians, due to the lack of archaeological evidence.

“Scholars have been hard pressed to explain the frequent use of dolphin imagery found in the sculptures and inscriptions of Petra and other Nabataean ruins (Madâin Sâlih among them).

“According to the conventional wisdom, the Nabataeans were exclusively a desert people, who ruled the caravan routes from the Gulf and Arabia Felix.

“But careful scrutiny of ancient historical accounts shows the Nabataeans also had a strong attachment to the sea. This early Arab people possessed not only a merchant shipping capability but a naval fleet as well."

Marshaling a compelling body of evidence, Bob argues that present-day Sharm Yanbu on the Charmuthas inlet north of Yanbu on the Kingdom’s Red Sea coast “could very well be the site of the long-sought ruins of Leuce Come.”

Nearly 40 years after Bob addressed the issue, the argument continues over the actual sight of Leuce Come. It’s worthwhile to note that, were you to drive today from Yanbu to Petra, the primary inland routes you’d take would pass close by Madâin Sâlih.

Our recommendation to our more adventurous readers—leaning heavily on Bob Lebling’s wisdom—would be to consider reenacting by car the ancient trading route from “Leuce Come” through Madâin Sâlih to Petra. There would be logistical obstacles to overcome, unquestionably, but a written account of such an adventure would be a welcome feature story at AXP.

Our next stop on our tour of the Seven Wonders of Arabia is the historical quarters of Jeddah, another UNESCO World Heritage Site. Look for our account of its splendors in a future feature story.