The Seven Wonders of Arabia, Part II: Historic Jeddah, “The Bride of the Red Sea” 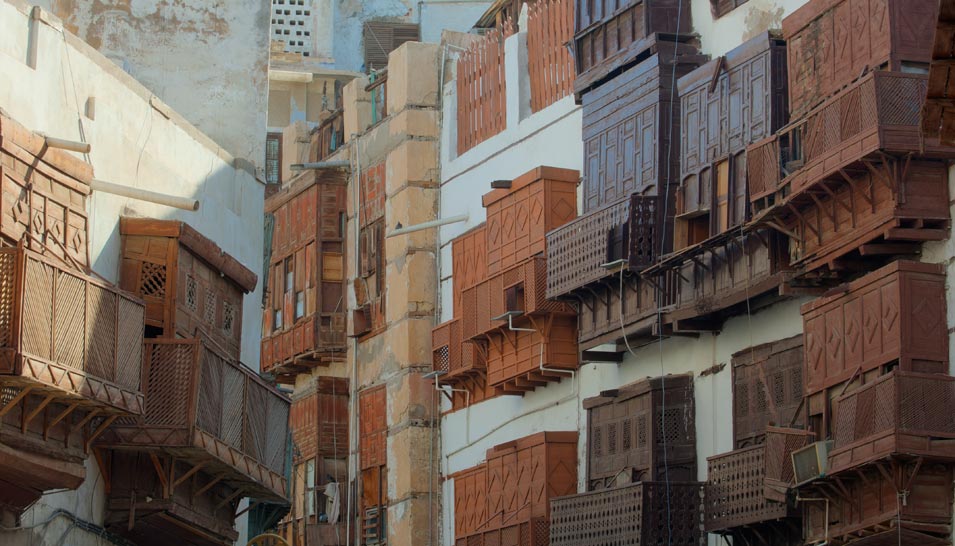 Recently, AramcoExPats launched a series on the Seven Wonders of Arabia with a visit to the monumental Nabataean rock edifices of Madâin Sâlih­—also known as Al Hijr—20 or so miles northeast of the municipality of Al Ula in Al-Madinah Al-Munawarah Province. Here we continue our journey across the Kingdom with a stop 200 miles due south of Madâin Sâlih in Makkah Province at the historic Old Quarters of Jeddah, granted World Heritage status by UNESCO in 2014.

Located in the Tihamah region of the Hejaz on the west coast of the Kingdom, the port city of Jeddah has served for well over a millennium as a vital nexus for trade routes connecting Arabia and the Mediterranean Basin with India and lands east via the Red Sea, Gulf of Aden, and Indian Ocean. Added to that, since the birth of Islam, its port precincts have welcomed untold millions of pilgrims arriving by ship on their way to the holy cities of Medina and Makkah. Across many centuries, a multitude of international interconnections such as these, fostered by faith and trade, have resulted in a vibrant multicultural city unique in the world, major vestiges of which, concentrated in the Old Jeddah quarter adjacent to the historic waterfront, endure to this day. Thanks to the concerted efforts of forward-thinking Saudi leadership and UNESCO, dramatic steps are being taken—and still more are planned—to ensure that the wonders of Historic Jeddah will endure for the benefit and enrichment of future generations.

Notable literary accounts of Jeddah abound. One of our favorites comes from Chapter VIII of the 1935 Jonathan Cape edition of Seven Pillars of Wisdom by T. E. Lawrence. In his opus magnum, the author—better known to history as Lawrence of Arabia—described his approach to “Jidda” by sea from Egypt during World War I aboard a small converted passenger liner called the Lama (notorious for his loose renderings of Arab words into English Latin characters, on occasion Lawrence unashamedly spelled the city’s name two or three different ways on the same page):

“We had the accustomed calm run to Jidda, in the delightful Red Sea climate, never too hot while the ship was moving. By day we lay in shadow, and for great part of the glorious nights we would tramp up and down the wet decks under the stars in the steaming breath of the southern wind. But when at last we anchored in the outside harbour, off the white town hung between the blazing sky and its reflection in the mirage which swept and rolled over the wide lagoon, then the heat of Arabia came out like a drawn sword and struck us speechless. It was mid-day, and the noon sun in the East, like moonlight put to sleep the colours. There were only lights and shadows, the white houses and black gaps of streets: in front, the pallid lustre of the haze shimmering upon the inner harbour; behind, the dazzle of league after league of featureless sand, running up to an edge of low hills, faintly suggested in the far away mist of heat.”

Later, in Chapter IX, Lawrence shared his observations from a walk he took through the city with his companions:

“It was indeed a remarkable town. The streets were alleys, wood-roofed in the main bazaar, but elsewhere open to the sky in the little gap between the tops of the lofty white-walled houses. These were built four or five stories high, of coral rag tied with square beams and decorated by wide bow-windows running from ground to roof in grey wooden panels. There was no glass in Jidda, but a profusion of good lattices, and some very delicate shallow chisseling on the panels of window casings. The doors were heavy two-leaved slabs of teak-wood, deeply carved, often with wickets in them; and they had rich hinges and ring-knockers of hammered iron. There was much moulded or cut plastering, and on the older houses fine stone heads and jambs to the windows looking on the inner courts.

“The style of architecture was like crazy Elizabethan half-timber work, in the elaborate Cheshire fashion, but gone gimcrack to an incredible degree. House-fronts were fretted, pierced and pargetted till they looked as though cut out of cardboard for a romantic stage-setting. Every story jutted, every window leaned one way or other; often their very walls sloped. It was like a dead city, so clean underfoot, and so quiet. Its winding, even streets were floored with damp sand solidified by time and as silent to the tread as any carpet. The lattices and wall-returns deadened all reverberations of voice. There were no carts, nor any streets wide enough for carts, no shod animals, no bustle anywhere. Everything was hushed, strained, even furtive.. … There was nothing in the bazaar to buy.”

To an extraordinary degree profusely extolled by UNESCO, Historic Jeddah has maintained to this day notable elements of the singular urban center Lawrence described so colorfully fully a century ago. While modern Jeddah writ large has grown into a thriving, sprawling, cosmopolitan metropolis of over 4 million people, a third or more of Historic Jeddah has miraculously survived modernization. Its designation in 2014 as a World Heritage Site was calculated to preserve and revitalize the distinctive buildings, acclaimed souks, idiosyncratic architectural treasures, and sundry features like the Old Jeddah Wall of “Al-Balad” (“The Town” in English) as Historic Jeddah is commonly known, preserving them in all their splendor for centuries to come.

When UNESCO inscribed Jeddah as a World Heritage Site in recognition of its outstanding universal value, they did so citing three key criteria:

Criterion (iv) – “to be an outstanding example of a type of building, architectural or technological ensemble or landscape which illustrates (a) significant stage(s) in human history.” [On this count, UNESCO notes, “Historic Jeddah is an outstanding reflection of its final flourishing as a trading and pilgrimage city and, the only surviving urban ensemble of the Red Sea cultural world.”]

Criterion (vi) – “to be directly or tangibly associated with events or living traditions, with ideas, or with beliefs, with artistic and literary works of outstanding universal significance.” [On this count, UNESCO notes, “Historic Jeddah is directly associated, both at the symbolic intangible level and at the architectural and urban level with the Hajj, the yearly Muslim pilgrimage to the Holy City of Makkah.”] 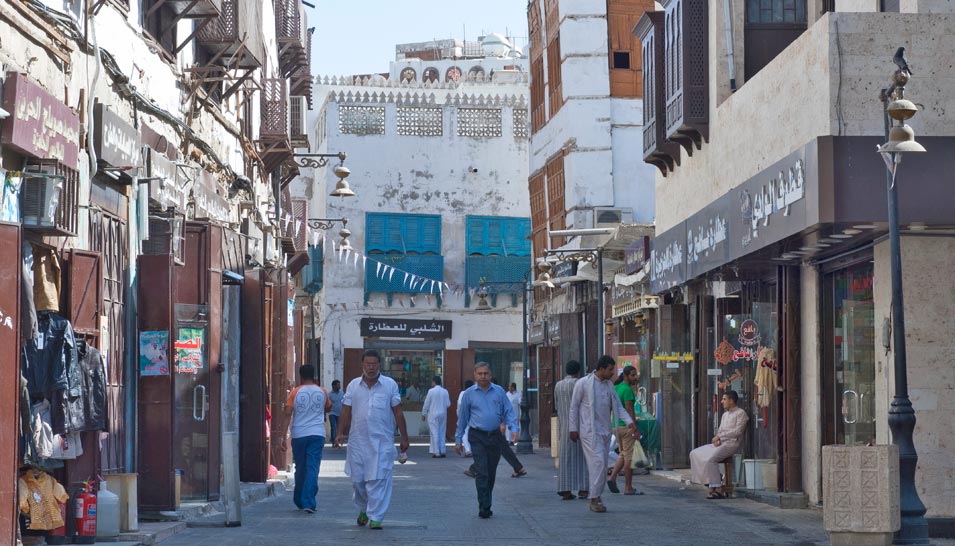 Since the early 1950s, a significant body of literature has grown up around a distinctive form of architecture known as “the Red Sea Style.” That style—an after-the-fact creation latter-day scholars have superimposed on the past based on their modern sensibilities, not a style consciously followed by its alleged practitioners in their time—is evidenced in the houses of major seaports in the region such as Suakin in Sudan, Massawa in Eritrea, and Jeddah and Yanbu in Saudi Arabia. Coralline limestone (also referred to as coral rock), imported hardwoods like teak and shorea and mangrove, and plaster were the primary building materials used, as memorably described by Lawrence. The teak and other exotic woods employed often arrived in Jeddah from abroad aboard wooden sailing ships that used it as ballast and sold it to eager buyers once they made port in Arabia.

Today the Red Sea style houses once common across the coastal region have mostly either been torn down and replaced by modern structures or fallen into ruin, with the notable exception of the houses of Historic Jeddah. The single greatest remaining concentration of this unique architectural style—over 500 examples—can be found there. And now, with Historic Jeddah declared a World Heritage Site, they have taken on a new life and many, but unfortunately not all, of them will be saved. (Of note, among the coastal cities of the Red Sea, the four- and five-story tower houses described by Lawrence, although common to inland Arabia, were found on the coast only in Jeddah.) Overall, the Red Sea style homes of Jeddah stand in stark contrast with the dominant inland architectural styles of Arabia, tower houses notwithstanding.

“As a non-monumental building tradition that emerged at the southern edge of the Ottoman world in the sixteenth century and continued into the twentieth,” Nancy Um of Binghamton University has written, “the Red Sea style represents a tangible case of sustained cross-cultural contact across a linked maritime region and thus moves beyond the conventional modern limits of continent and nation.”

According to Um, the most notable feature of the Red Sea style house “was the rawshan (pl. rawāshin), or wooden projecting window. Large enough for one or two people to sit in, it created an extended interior living space that combined street views with refreshing breezes. The rawshan usually featured a wide overhanging shade and shutters that opened to the exterior. While the rawshan could be found on houses in all of the major Red Sea ports, there was great diversity in its shape and decoration, as well as in its placement. For instance, many examples in Jidda were linked up vertically along the height of the building, constituting a second projecting façade to the house.”

The inscription of Historic Jeddah as a World Heritage Site was fortuitous in its timing, for it is questionable whether the fragile, delicate nature of the typical Red Sea style house would have survived much longer without the careful attention and extensive preservation efforts now underway.

UNESCO points to “Integrity” as an essential characteristic of Historic Jeddah:

“The nominated property covers about one-third of the original walled-in city and contains an ensemble of the attributes that convey its Outstanding Universal Value. … Notwithstanding the inevitable decay of the historic structures and the overall evolution of its urban surroundings, the nominated property still possesses all the necessary attributes complying with the concept of ‘intactness,‘ including the commercial processes, the social relationships and the dynamic functions essential to define its distinctive character.”

UNESCO points to “Authenticity” as another essential characteristic of Historic Jeddah:

“Historic Jeddah, the Gate to Makkah, is a living urban environment primarily hosting residential and commercial activities, with mosques and charitable structures. The nominated property represents an authentic and traditional urban environment where the headquarters of century-old economic enterprises, retail shops, traditional souks, small cafés, popular restaurants, and street food vendors are still concentrated. A surprisingly rich human environment where Yemeni, Sudanese, Somali, Pakistani and Indian migrant workers purchase and market their products to Saudi and non-Saudi clients in crowded traditional souks. Far from a frozen and dead tourist attraction, the nominated property is an authentic sector of the city that still fully conveys the image of what this Red Sea commercial and pilgrimage city used to be.”

Historic Jeddah is unique to Saudi Arabia, unique to the Red Sea region, unique to the world, and richly deserving of its recently-acquired status as an inscribed World Heritage Site.

This series on the Seven Wonders of Arabia began with a stop at Madâin Sâlih­. Historic Jeddah—“The Bride of the Red Sea” a.k.a. “the Gateway to Makkah”—can now be added to the growing list of destinations visited. The striking contrast between these two magnificent World Heritage Sites—one monumental in scale, the other intimate; one wrought of desert rock, the other of coral from the sea and wood from far off lands—bespeaks the wide variety of experiences available to visitors to the Kingdom. Many of you readers, seasoned ExPat annuitants that you are, already know about that. Increasingly, the rest of the world is starting to catch on to Arabia’s historical and cultural treasures. For far too long, places like Madâin Sâlih and Historic Jeddah have remained secrets to much of the outside world, hidden in plain sight for anyone to see who takes the time to visit and look.

With five more Wonders awaiting, in future installments AXP will continue to do its part, however modest, to open the door to the mysteries of this storied desert land. Two down, five to go. Next stop, ad-Dir'iyah.