The Seven Wonders of Arabia, Part V: Al-Hasa—The Grandest Oasis of All 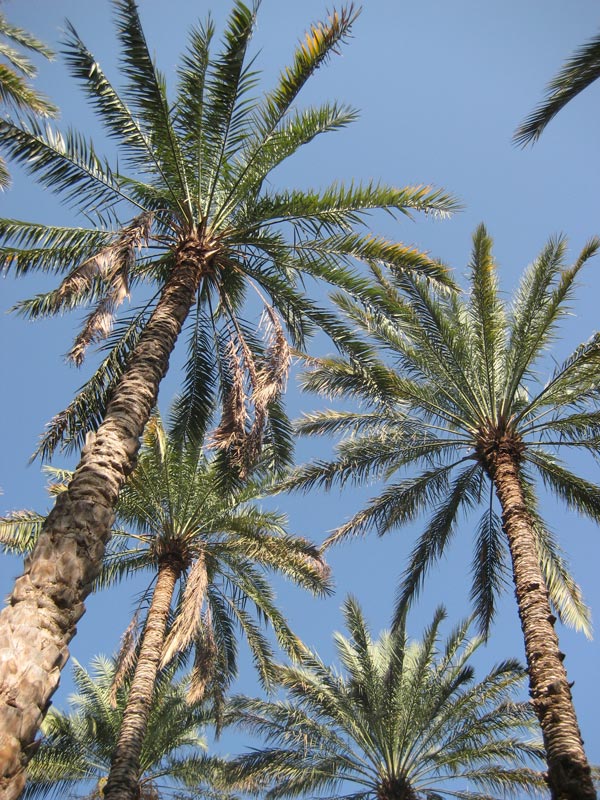 In the minds of people the world over, the most romantic, most exotic element associated with the deserts of Arabia are its oases. Images of palm trees swaying in the sultry breeze, of camels slaking their thirst from crystalline springs, of Nightingales and Hoop-Hoops and Bee-eaters singing gaily from their lofty perches, of weary travelers feasting on dates as they recover from the rigors of their desert journey—all are indelibly etched in the popular imagination. As home to over 3 million palm trees, the ruins of several abandoned cities, over 150 sparkling springs (hot, warm, or cold, mineral or clear, take your pick), serene green expanses, and so much more, Al-Hasa Oasis in the Kingdom’s Eastern Province, 60 miles inland from the Arabian Gulf, is the largest and grandest oasis of all—not only in Arabia but in all of the world. If there is a scale measuring degrees of uniqueness, Al-Hasa Oasis sits upon the highest rung. Recognizing its many splendors, in 2018 UNESCO inscribed Al-Hasa as Arabia’s fifth World Heritage Site, joining Madâin Sâlih, Historic Jeddah, the At-Turaif District in ad-Dir’iyah, and the rock art of Ha’il on the WHS list.

[NOTE: Al-Hasa is often spelled Al-Ahsa or, sans hyphen, Al Hasa or Al Ahsa. We’ve opted to use Saudi Aramco Translation Division’s spelling and choice of hyphenation—Al-Hasa—throughout this piece, unless spelled and/or hyphenated otherwise in a direct quote taken from another source.]

Spread out over 120 square kilometers (46+ square miles) of area, the date groves of Al-Hasa produce on a daily basis some five tons of what supporters claim are the finest dates in the world, and many an Aramcon who’s tasted them would agree. The name “Al-Hasa” itself is derived from a geological phenomenon that helps explain the origins of the Oasis’ abundant water. Over eons, massive deposits of sand have accumulated atop a dense substrate. When rain falls, the sand absorbs it like a giant sponge and saves it from evaporating in the searing heat of the harsh desert sun. At the same time, the hard, impermeable underlayment prevents the water from passing deeper into the earth. As a result, the sweet water springs Al-Hasa is famous for emerge naturally or with modest drilling. The Oasis is also noted for its comparatively pleasant weather and for the sound of water running through its underground channels.

The location of freshwater sources has played a pivotal role in the placement of human settlements throughout history, nowhere more so than on the Peninsula and nowhere more so on the Peninsula than at Al-Hasa. Indeed, water is the key to understanding its history and importance. In recent years, increased demand has seriously lowered groundwater levels in the area, greatly affecting the natural springs that have watered the Oasis through the ages. The waters of Al-Hasa are used almost exclusively for irrigation. As in most of Saudi Arabia, the primary source of drinking water for the local population is the Kingdom’s desalination plants. Preserving Al-Hasa’s water resources for future generations to enjoy is a key element of the master plan developed in conjunction with Al-Hasa’s WHS inscription.

Drawn by its abundant waters and attendant wealth of flora and fauna, humans have inhabited Al-Hasa Oasis since prehistoric times. Those readily-accessible waters in turn made possible the development of an extensive agriculture-based economy led above all by the growing of dates. Conditions allowed additionally the sophisticated cultivation of rice, vegetables, and fruits—all kept properly watered by means of advanced irrigation systems. The importance of Al-Hasa to life on the Peninsula cannot be underestimated. Today, many thousands of years after people first settled at the Oasis, Al-Hasa comprises fully 20 percent of Saudi Arabia’s agricultural area. Few cultivated lands anywhere in the world have a longer or more noteworthy history.

Politically, Al-Hasa Oasis gave its name to the government entity making up much of the Eastern Province, a land that was transformed following the discovery of vast petroleum deposits near Al-Dammām 100 miles to the north in the late 1930s. In the ensuing decades, an influx of foreigners to meet the labor demands of the oil industry resulted in significant changes, thrusting Al-Hasa Oasis further into the international spotlight along the way. The territory to the west and north of the oasis remains the Kingdom’s primary producer of petroleum to this day.

The Oasis was home to some of the earliest known human settlements on the Peninsula, and its history long predates the birth of Islam. Al-Hasa is known to have had extensive ties to the ancient civilizations of the Levant, Egypt, and Mesopotamia and was a key transit point on the spice and incense caravan routes of yore. It’s even been asserted that Al-Hasa was at the turn of the first millennium CE the ninth largest city in the world with an estimated population of 100,000 people.

A glance at the history of Al-Hasa reveals an endless succession of conquering rulers stretching over the millennia. Early in the 16th century, the Portuguese held sway over the surrounding region, only to be ousted by the Ottomans, who in turn were tossed out by the forces of the Banu Khalid tribe. Later, Al-Hasa for a time was part of the first Wahhabist Emirate, only to return to Ottoman rule in 1818. Over the next century, control of the Oasis changed hands several more times until 1913, when ibn Saud, founder of modern Saudi Arabia, conquered the region and incorporated it into his fledgling kingdom. Al-Hasa sits astride one of the most popular routes taken by Muslim pilgrims on their way to Mekkah. One of its historic nicknames is, appropriately, “The Gateway to the Arabian Peninsula.”

One of Al-Hasa’s greatest attractions to visitors today is how well it has managed to retain much of its rich historical past and traditions. A devastating fire destroyed the old souk some years ago, but a new market has risen from the ashes and the Oasis’ vitality continues to astound. There are few places in the Kingdom where voyagers from far away lands can see and experience in one place so many layers of Saudi history and culture. The Oasis, in short, is a bridge that spans the ages.

In a recent email to AXP, Brid Beeler of Brid Beeler Travel, noted specialist in travel to Arabia and the Middle East, described the impression Al-Hasa has on visitors: ““The coolness of Al Hasa oasis greets you,” she wrote, “when you descend from the hot overhead sun to beneath the shaded umbrella of palm fronds singing in the light breeze with birds flitting from tree to tree. Water is funneled through the old falaj (irrigation) system, dammed and released by hand accordingly to ensure that the waters travel along the channels where irrigation is needed. The oasis is a welcome respite from the heat of the day where picnics are enjoyed and naps are taken listening to the water running along the channels. Frogs hop in and out of the falaj dancing to the music of the running water. As the sun begins to set the chorus of bird song is almost deafening.”

As justification for its decision to nominate Al-Hasa Oasis for WHS inscription, UNESCO’s evaluation team wrote:

“In the eastern Arabian Peninsula, Al-Ahsa Oasis is a serial property comprising gardens, canals, springs, wells and a drainage lake, as well as historical buildings, urban fabric and archaeological sites. They represent traces of continued human settlement in the Gulf region from the Neolithic to the present, as can be seen from remaining historic fortresses, mosques, wells, canals and other water management systems. With its (millions of) date palms, it is the largest oasis in the world. Al-Ahsa is also a unique geocultural landscape and an exceptional example of human interaction with the environment.”

In a related Advisory Body Evaluation dating from April 2018, representatives from the International Union for Conservation of Nature (IUCN) wrote this in their Evaluation Report about Al-Ahsa [“Al-Ahsa Oasis, an Evolving Cultural Landscape”] :

“The Oasis is definitely a place of long-established interaction between people and nature. The origin of the oasis is based on the human attempt to utilize the abundance of water to transform natural landscapes into livable areas using primarily agriculture as a source of living and settlement in a very harsh desert environment.

“The oasis as a cultural landscape cannot be separated from its natural ecosystems, biodiversity and wildlife associated with the wetland ecosystems themselves as well as the surrounding desert ecosystems.

“…(T)he lagoons have been also identified as an Important Bird Area by BirdLife International (BirdLife International 2017). Furthermore, the nomination dossier repeatedly mentions the importance of Al-Ahsa ecosystems in the evolution of the Oasis. ‘River networks continue to flow underground and contribute, along with condensation, to the preservation of humidity in the sand creating a special ecology enabling specific life forms and adapted biodiversity to extreme situations.’ … Al-Ahsa, with its water availability, its geographical location and, above all, its varied environmental context (tree savannah, extreme desert, swamps and lagoons) was for three thousand years an ideal site for this pre-oasis culture. The great biodiversity, the presence of different ecotones, niches and micro-specific environments, had a reflection of cultural diversity, such as the development of the different skills needed in each case.”

H.R.H. Prince Sultan bin Salman bin Abdulaziz Al-Saud, President and Chairman of the Board of the Saudi Commission for Tourism and National Heritage, had the following to say when nominating Al-Hasa for WHS inscription:

“Since 2008, with the inscription of Al-Hijr Archaeological Site (Madain Salih), the Kingdom of Saudi Arabia has become an active member of the World Heritage community. The relevance of our rich and multiple cultural heritage has been acknowledged with the inclusion of other three major Saudi cultural sites on the UNESCO World Heritage List. …

“Al-Ahsa Oasis, an Evolving Cultural Landscape has universal significance as the largest oasis in the world. It is the extraordinary result of the combined action of nature and man throughout the millennia. Human activity, and traditional know-hows, made it possible to profit of the meagre water resources of the Arabian Peninsula and to develop a thriving human settlement based upon the sustainable use of the natural resources. Located in the Eastern Province of the Kingdom, near to the Gulf shores, Al-Ahsa Oasis, an Evolving Cultural Landscape has not been only preserved as a memory of the past, but has continued to live and to evolve to adapt to the needs of a modern society. Al-Ahsa today is the largest agricultural oasis on the planet with more than (three) million date palm trees, and in the meantime a large metropolitan area home to almost two million people. The Outstanding Universal Value of this property lies in this extraordinary capacity to evolve and develop while preserving the essence of the oasis concept.

“Al-Ahsa Oasis, an Evolving Cultural Landscape site is a unique, extremely fragile and non-renewable resource that depends on the continuous work of man to counter an aggressive and severe natural environment. This nomination document and the accompanying management and technical guidelines aim at ensuring the protection and sustainable development of this precious cultural heritage, promoting its social and economic development to make it a model for the development of sustainable settlement and agricultural practices in the Kingdom and in the region at large.…

“The Saudi Commission for Tourism and National Heritage is proud to participate — in close partnership with the Municipality of Al-Ahsa, the Governorate of Al-Ahsa and the Agricultural and Water management institutions that daily manage the property — to this national endeavour by placing the preservation of the oasis cultural landscape at the heart of the project.”

[Foreword to “Al-Ahsa Oasis, an Evolving Cultural Landscape” – Nomination Document for the Inscription on the World Heritage List Prepared by Saudi Commission for Tourism and National Heritage, January 2017, p. 10]