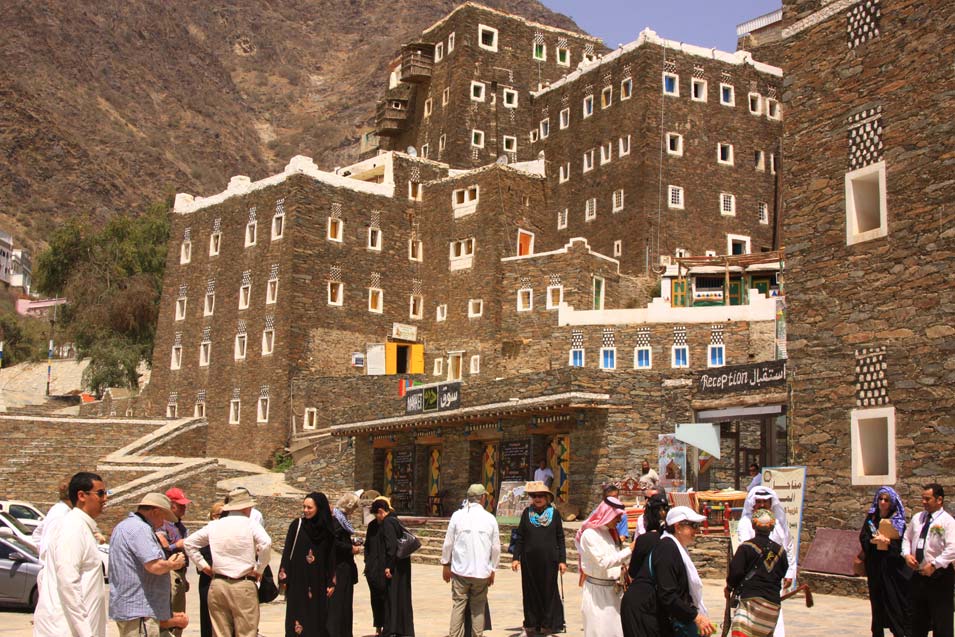 Since late last year, Aramco ExPats has been publishing installments in a series we call the “Seven Wonders of Arabia.” Five destinations— Madâin Sâlih, the Turaif District in ad-Dir’iyah, historic Jeddah, the Rock Art of the Ha’il Region, and Al-Hasa Oasis—have already been featured, each one of them previously inscribed by UNESCO as a World Heritage Site. With several worthy candidates contending for the final two slots on our list of the wondrous seven, for our sixth selection we turn to a site currently on the Tentative List for consideration by UNESCO for WHS status: the historic mountain village of Rijal Alma in the Asir region, high in the mountains of southwest Arabia. Rijal Alma is widely considered one of Saudi Arabia’s most stunning destinations, and with good reason.

In January 2018, the Saudi Commission for Tourism and National Heritage (SCTH) submitted an application for WHS recognition on behalf of Rijal Alma to the UNESCO World Heritage Center. Rijal Alma (variously translated into English as “the brightest men” or “the men of the region”) is projected to be inscribed sometime this year. Inscribed or not, the village is destined to become one of the crown jewels in the Kingdom’s ever-expanding list of revitalized destinations with global tourist appeal.

Home to a distinguished array of historic houses and other ancient monuments, not long ago Rijal Alma teetered on the brink of destruction. Thanks to an extensive preservation and rehabilitation effort undertaken by the Saudi leadership in concert with local and private interests, Rijal Alma—a vital and treasured part of the national heritage sometimes described as “a living museum”—has been reborn.

The village has a long and distinguished history. For many centuries, it sat astride a key corridor in trade routes linking the southern Peninsula with the Levant and the Nile River Valley. With the rise of Islam, it became an important stop for pilgrims on their way to Makkah for the Hajj. Some 60 distinctively-styled palaces built of stone and clay and wood speak volumes of the wealth the village accumulated off passing caravans laden with spices and incense.

A word often heard today when people talk about modernization is urbanization. Few moderns associate the term with the early history of the Arabian Peninsula, but that’s a mistake. Properly understood, the multi-story buildings of Rijal Alma are in truth symbols of early urbanization in the desert. Sedentary city dwellers, not roaming nomads, built Rijal Alma. Pointing to the village, scholars argue that “the history of architecture in the Middle East starting from 7th century to the end of the 19th century was the real beginning of sustainable design and development.”

The village is known for its distinctive examples of Qut wall paintings, a traditional, geometric, decorative style unique to the area. Continuing to employ a limited range of earth colors, Qut decorations today remain loyal to a remarkable degree to an artistic tradition centuries old. Women are said to have been primarily responsible historically for Qut wall art, following a simple formula: “Men build the palaces; women decorate the interior walls.” Through the centuries, when homes were redecorated, new layers of images would be added to the walls. As part of the restoration process currently underway, attempts are being made to replicate the underlying patterns left over from previous eras.

According to one authority on the origin of the Qut style, “Ancient legend has it that little girls playing with colored flowers developed a homemade type of paint from the petals, which then evolved into these geometric, bright wall paintings.”1

A distinctive feature of Rijal Alma architecture is the use of gleaming white sugar-quartz to frame windows and doorways in the village’s palaces and homes. The stunning, signature effect has been likened to that of a multi-tiered assemblage of giant gingerbread houses.

Rijal Alma has been called “a magnet for nature lovers,” a reference to its lush, verdant setting which contrasts sharply with the image most outsiders have of the Kingdom. A favorite past-time of locals is to sit outside on their roofs and terraces and watch eagles soaring through the skies around them. The village owes its salubrious climate and appealing living environment to its perch high in the mountains of southern Arabia.

Brid Beeler of Brid Beeler Travel, Ltd., a prominent organizer of tours to the Kingdom for over 30 years, had this to say to AXP about the Asir region and Rijal Alma:

“Running along the backbone of the Kingdom, the mountainous Asir region rises dramatically between Taif and Najran on the Yemeni border. Throughout the Asir, villages cling precariously to the cliff faces and slumber quietly in hidden ravines. While most visitors to Jebel Soudah go there for its cool mountain air, its verdant forest, naughty baboons and stunning year-round green scenery, only a few choose to take the hair-raising journey down the switchback mountain road that leads to the village of Rijal Alma. 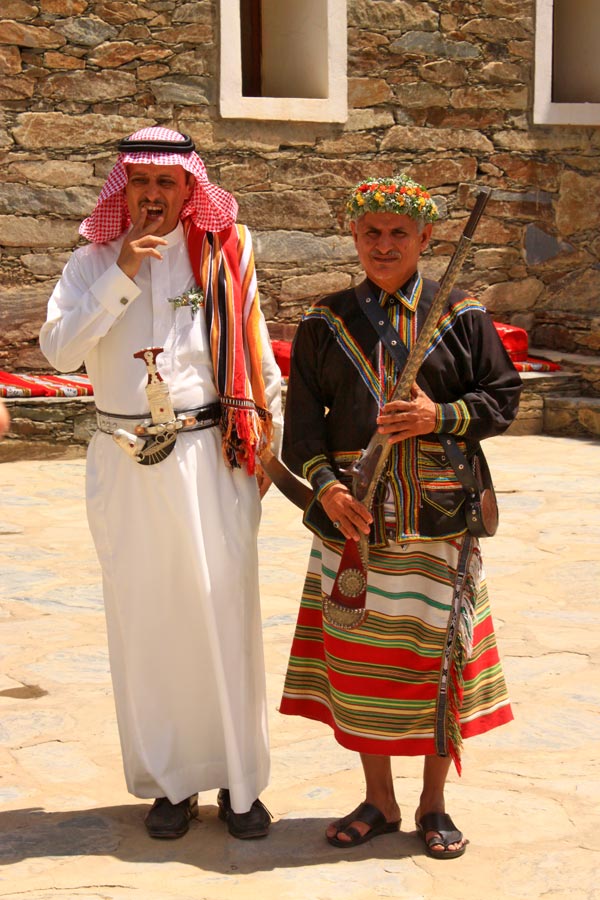 “Situated half-way down the mountain in a ravine not easily accessed from the outside world, the stone tower houses of Rijal Alma resemble the villages found in the neighboring Yemeni highlands, with black stone and white lime wash around the windows and doors. These homes are interconnected, so that women in the past did not have to climb down six or seven flights of stairs and back up again to visit with their neighbors. Instead, they could hop from rooftop to rooftop, where harvested dates and all manner of fruits would dry outdoors in the midday sun. Here the women sat in the cool evening breeze, drinking chai (tea) or gahwa (coffee) with their neighbors or in daylight hours doing the laundry which colorfully swung in the gentle breezes. Large metal cans perched on the edges of homes suddenly became garden pots where orange flowers and bright carnations grew alongside basil, sage and other herbs. These prized flowers and herbs were not used in the cooking pot as one might assume but rather were grown for the men of the Asir and were believed to have medicinal powers. A wreath of herbs is woven with the flowers neatly tucked into the side and worn on the heads of men from this region along with black Kohl eyeliner around the eyes.

“The men in this region also wear their traditional style of dress, featuring a long, hand-woven cloth that resembles a futa (skirt) with stripes of color in red, white, black and gold typically woven into the loomed fabric. This futa of cloth is worn around a man’s waist as a skirt and typically held in place by a wide leather belt with a jambiya (curved dagger) shoved in at the waist. A shirt is worn tucked into this attire and over the shirt is casually thrown a woven hand-loomed fabric across one shoulder and diagonally across the waist perched over the curved sheath of the jambiya. These are captivatingly elegant dressed men, the likes of which are not encountered in any other region of the Kingdom. While traditional Saudi-style white robes and red-and-white checkered ghutras are worn by most Saudis elsewhere, here in the Asir the old-style of traditional dress is favored and always worn for ceremonial occasions. As in many mountain communities worldwide, the tightly-held traditions of RIjal Alma are not easily eroded.”

In the application submitted by them to UNESCO for Rijal Alma’s WHS inscription, SCTH wrote: “Rijal Almaa Traditional Village in Assir was built on the hands of the men of this region and that with their efforts were capable to preserve the heritage of this region and collect it in one of the fortresses of this majestic village.”2

They cited Criterion (v) in support of their application: “The Traditional Village of Rijal Almaain Assir is an outstanding example of a deliberately preserved traditional settlement, representative of a culture that has become vulnerable under the impact of irreversible change. This village, which developed mainly during the 10th-century AH/8th century CE, not only represents the architectural subgroup within the Assir Region but also bears witness, for the Kingdom as a whole, to the traditional forms of rural life which were generally abolished by the agricultural revolution in the 20th century.”

They also cited Criterion (iv): “The Traditional Village of Rijal Almaain Assir is an outstanding example of traditional human settlements that are perfectly adapted to their environment and their social and economic raison d’être.”

They had this to say on the question of Integrity: “The property includes the most important elements and components of the village and the surrounding landscape the deliberately preserved traditional settlement, the farm lands belonging to it, the wider landscape and the natural environment with all its character-shaping elements. The traditional settlement and its landscape environment, shaped by land-use, together with its fortification that organize and orient the landscape’s panorama, form a harmonious and intact entity in its visual appearance.”

With any luck, for all these reasons, sometime later this year AXP will have the pleasure of announcing Rijal Alma’s inscription by UNESCO as a World Heritage Site.

AXPs selection of Rijal Alma as our sixth “Wonder of Arabia” means we have one more to go. Which location in the Kingdom will that be? “Stay tuned!” as they used to say on the radio in the good old days.