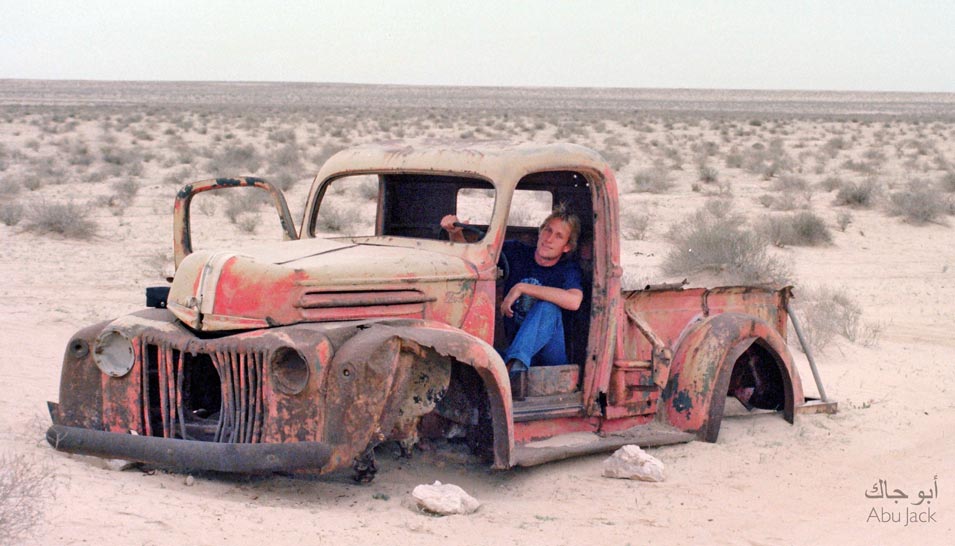 Mark poses in an abandoned Aramco vehicle during a weekend trip to the desert in 1979.
Eastern Province, Saudi Arabia.

It was a Friday in January 1979, my only day off each week as a contractor to Aramco, and I was ready for an adventure. My American friend, Rob, drove from Al Khobar and arrived around 6 a.m. at the door of my single room in the Abqaiq contractors’ bachelor camp. I borrowed a meal chit from another friend for Rob to use, and we headed to the mess hall to enjoy a hearty breakfast of bacon, eggs and pancakes. Pork products, including bacon, are banned in Saudi Arabia, so I was gradually becoming accustomed to the taste of beef bacon.

The plan for the day was to venture into the desert in Rob’s two-wheel-drive pickup truck to take photographs with our new cameras, the Olympus model OM-2, which we had recently purchased in Al Khobar’s electronics souq. The OM-2, one of the first affordable cameras to offer an “automatic” setting with a built-in light meter, was purportedly easier to use than the then standard single lens reflex cameras that were operated manually and required separate light meters. We were eager to try out this latest technology.

We headed west from Abqaiq down the Ain Dar road and turned right at the T-junction near Ain Dar GOSP-1. Ninety minutes into our journey we reached the Fazran GOSP (Gas Oil Separation Plant) construction site. I commuted to this site six days per week, so I knew this route well. Fazran is where the pavement ended. We were in the middle of the age-old migration route that pastoral nomads (Bedouins) travelled seasonally to graze their camels and sheep between the Empty Quarter and Kuwait.

To continue north, we had a choice of routes: the drillers’ roads or the Bedouin tracks. The compacted clay-marl drillers’ roads, built for transporting Aramco equipment between oil wells, were about three truck-widths wide. Straight and rolling, rising and falling with the desert terrain, the clay surface was sometimes eroded by the wind and heavy use resulting in a rippled “washboard” effect. Not only a bone-jarring and noisy ride, it was often difficult to steer at speeds above 20 mph. 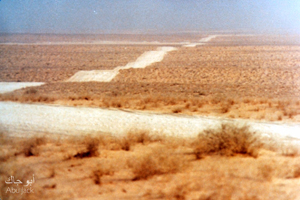 Smaller sand tracks created by the Bedouins’ vehicles paralleled and diverged from the drilling roads in all directions. What a relief it was to transfer to the relative tranquility of the smooth, soft sand. However, the trade-off was that a two-wheel drive vehicle could easily get stuck in the sand. As a precaution, we deflated the tires slightly so they would not sink so readily in the dunes. The trick was to maintain speed and not turn the steering wheel suddenly or use the brakes. Once or twice we bogged down and came to a sudden stop, the rear wheels spinning in vain. We had to dig ourselves out with a shovel and coax the truck onto wood planks placed under the tires. This was hard work and could take hours, always with an eye down the road in search of another vehicle that could help us get moving again. 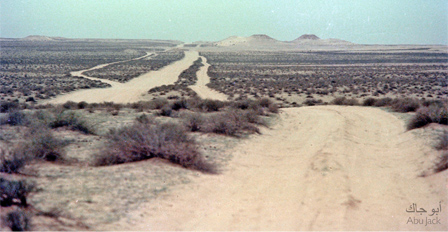 It had been a wet winter with periods of heavy rain. All around us, the land was tinged green with tender shoots of grass and shrubs. There were even small, impermanent lakes where the rain water had collected in low spots. Steadily making our way northward, we reached an area where many Bedouin families had relocated their tents and encampments to graze their goats and camels. Just over a small hill on the drillers’ road we came across an Aramco vehicle that had been abandoned in the desert decades before. The truck had long been stripped of any removeable parts, and its faded red paint had started to resemble the color of the surrounding desert. Yet, remarkably, the vehicle identification number was still legible.

Nearby was an old artesian water well, the type that has helped Bedouins survive for centuries. Salty and brackish, the water was lifted out with buckets. With the expansion of the oil and gas plants in the mid-1900s, Aramco provided permanent water supplies, often in the form of concrete camel troughs, fed by fresh water from deep wells, which were more easily accessible and were used by the Bedouins. 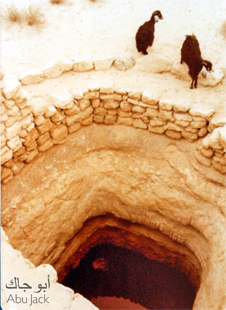 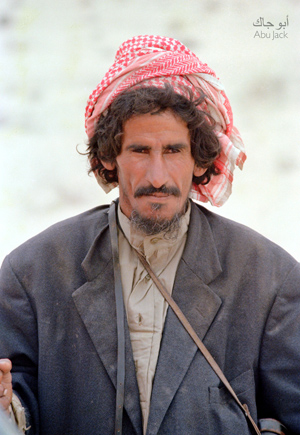 This Bedouin was walking alone in the desert.

As we were driving later that afternoon, we encountered a handsome, dignified gentleman walking alone in the opposite direction. He was dressed in a navy-blue sports jacket over his beige winter thobe and had a leather satchel strapped across his chest. In my journal, I called him the “constable,” because he carried a rifle with bullets and had a very serious demeanor. We stopped, got out of the truck, shook hands with him and exchanged pleasantries in our limited Arabic. After his response, there was a long, awkward silence. He looked at me with a stoic, slightly walleyed gaze. None of us really knew what to do next. Finally, I motioned that I would like to photograph him and he agreed. As we were headed in opposite directions, we thanked him and continued on our separate ways, leaving so much unsaid.

Through the ensuing years, I often wondered about this mysterious man on his lonely trek across the desert expanse. What was his story? What tribe did he belong to? When I returned to the kingdom 35 years later, I showed the photo I took of him to dozens of Saudi Bedouin friends who had grown up in that area near Fazran. They, in turn, sent the picture to friends and relatives but, try as they might, we have been unable to identify him. The only clue is that his facial features appear to be those of the Al-Marri tribe. 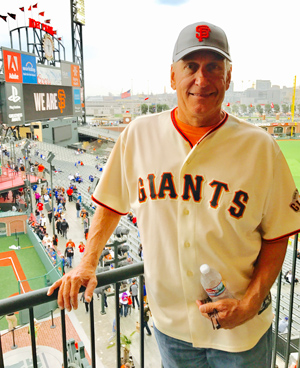 California-born and raised, Mark earned a degree in Construction Management and embarked on a career that started in Saudi Arabia and continued around the world. By luck or fate, his final project before retirement took him back to Saudi Arabia.

A self-taught amateur photographer, Mark documented his early days in Saudi while living in Abqaiq and working in the vast oil fields of the Kingdom’s Eastern Province.

Mark and his wife are now retired and have returned to California.