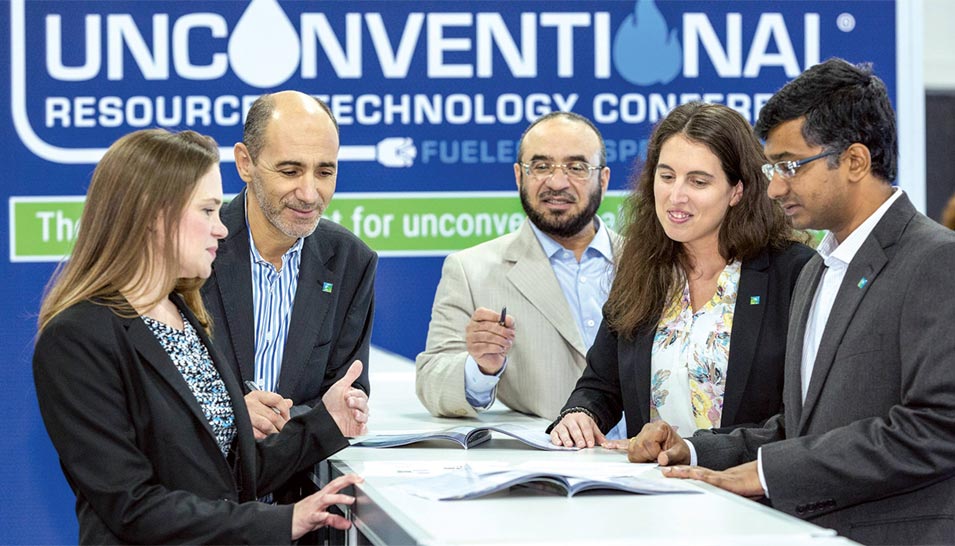 The next chapter in unconventionals will be written by companies who compress innovation cycle time, remain laser focused on financial metrics, and adopt a broader innovation mindset to gain a competitive edge.

That was the overriding message from the opening session of this year’s Unconventional Resources Technology Conference (URTeC) in Denver, Colorado. Aramco’s technical presence has strengthened since its participation in the 2013 inaugural conference. At that time, unconventionals were a North American phenomenon. Aramco added the international component, signaling its pursuit of unconventionals, namely shale gas, in support of the Kingdom’s Unconventional Gas Initiative. This year’s conference left no doubt that at the forefront for most operators was delivering on ﬁnancial returns.

The geomechanics theme was again the largest with 10 technical sessions — three chaired by Aramco upstream personnel. Our researchers, geoscientists, and reservoir engineers presented on a wide range of nearly a dozen papers in sessions covering advanced formation evaluation, proppant placement, novel completion technologies, and geophysics.
While small- to medium-size operators in North America are credited as the unconventionals’ pioneers, the rise of international shale development in countries such as Russia, China, Argentina, and Saudi Arabia has drawn notice.

“Some may say we came in a bit late but we managed to expedite our learning curve,” said Ahmed H. Mubarak, chief explorationist with the Southern Unconventional Resources, Exploration, and Appraisal Division at Saudi Aramco. “With a comprehensive suite of logging tools we ensure optimum well placement in the target zone and enhanced hydraulic fracturing techniques are putting us among the highest percentile of the best performing wells in North America.”

Mubarak added that a multidisciplinary “one-team” approach from the outset has allowed the unconventionals program to advance rapidly. Field efficiency factors, automation, and ﬁeld services management are continuously monitored with nearly a dozen highly automated rigs soon to be delivered for dedicated shale gas drilling, according to Fahad A. Bani, manager of Unconventional Gas Drilling with the Unconventional Resources Drilling Department.

URTeC attracts a broad range of specialists — geologists, geophysicists, and reservoir engineers — to address the unique challenges associated with unconventional, or shale, oil and gas production. With a joint effort by the world’s three largest leading oil and gas professional societies — the Society of Petroleum Engineers (SPE), the American Association of Petroleum Geologists (AAPG), and the Society of Exploration Geophysicists (SEG) — the conference remained true to its strong technical program with nearly 400 papers and over 6,000 attendees.

Panel discussions addressed emerging technology, artiﬁcial intelligence, sustainable development induced seismicity, and well integrity. URTeC has expanded with regional conferences in North America and now goes international with an Asia Paciﬁc URTeC scheduled for November of this year in Brisbane, Australia, in recognition of new players and emerging unconventionals basins around the world. Aramco was a diamond sponsor with ASC Upstream staff coordinating and hosting, along with support from Public Affairs and Stafﬁng and Recruitment.