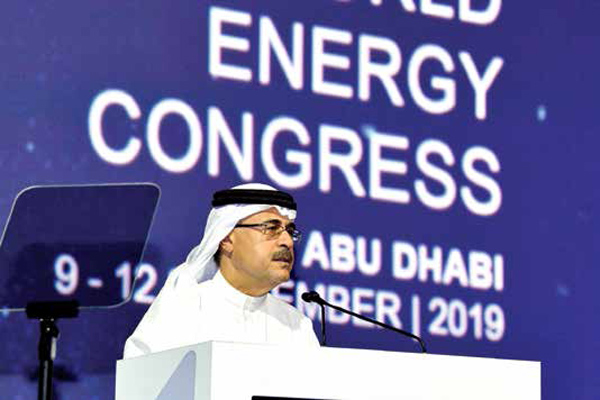 Delivering yesterday’s keynote address on day two at the 24th triennial World Energy Congress in Abu Dhabi, Saudi Aramco president and CEO Amin Nasser advises thousands of energy specialists — gathered from across the world — that it is critical for the oil and gas industry to come together to meet society’s demand for ultra-clean energy.

Abu Dhabi — Deliver on the world’s demand for ultra-clean energy, and there is no limit to our potential was the inspiring call to action made by Saudi Aramco president and CEO Amin Nasser on Tuesday to the world’s oil and gas industry.

“We have heard, loud and clear, the call from stakeholders and society at large for cleaner energy,” Nasser said during his keynote address to the more than 15,000 energy stakeholders from approximately 150 countries gathered at the 24th triennial World Energy Congress. “The world faces an incredible climate challenge, and we need a bold response to match.”

“Quite simply, our products need to be much cleaner,” Nasser said, adding that there is “a massive task ahead if we are to meet society’s expectations.”

Noting the significant clean energy progress by oil and gas companies within their gates — particularly in terms of conventional emissions and carbon management — he petitioned the industry to embrace a “mission-critical” transformative role beyond its gates.

“In my view, that means the entire industry must come together around a new mission beyond our gates of making oil and gas much cleaner across the full spectrum of end-use applications,” said Nasser.

“Whatever the framework, it needs to be a comprehensive, industry-led effort, it needs to move fast, and it must articulate clear, long-term carbon management strategies that give our stakeholders sufficient confidence in our programs,” he advised.

While supporting the essential and growing contribution of alternatives in meeting rising global energy demand, the CEO highlighted widespread industry concern at government policies that “seem to assume there are quick and easy answers to the many challenges alternatives face, policies that also seem to assume rapid electrification of transport, overlooking the issue of clean electricity and a life-cycle measurement of greenhouse gas emissions, and policies that will cost tens of trillions of dollars, with the burden often falling on those who can least afford it.”

“The world can no longer afford such policy miscalculations,” he warned. “We need regulators to be policy holistic and technology agnostic.”

Commenting that roughly 1 billion people on the planet still lack access to reliable electricity, with population growth exploding (particularly in sub-Saharan Africa), he added: “Acute energy poverty will remain a huge challenge. It would be inhumane to ignore the issue, wish it away, or dismiss our industry’s central role in tackling it.”

Goal 7 of the 17 “Sustainable Development Goals” — a collection of global goals set by the United Nations General Assembly in 2015 for the year 2030 — is “Affordable and Clean Energy.” 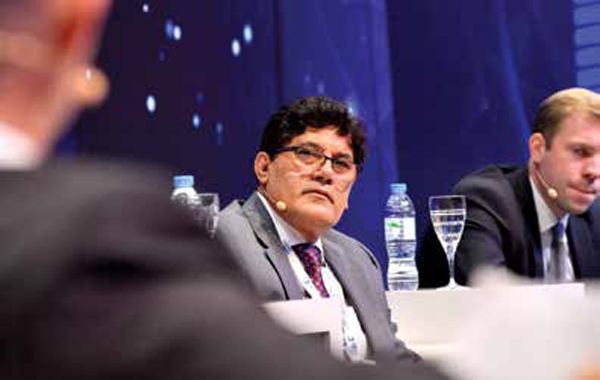 Aqil Jamal, chief technologist for Carbon Management at Saudi Aramco’s Research and Development Center (R&DC), participated in an international panel discussion on “The Role of Hydrogen in a Sustainable and Secure Future.”

The panel included global energy leaders and experts on hydrogen, and the discussion centered on potential technical and commercial challenges in driving the emerging hydrogen-based mobility and power generation markets forward, and exploring the dynamics around the hydrogen supply chain linking potential hydrogen producing and consuming countries.

Jamal explained to the audience that, in a way, as a fully integrated energy and chemicals company, Saudi Aramco is already a major supplier of hydrogen in the form of hydrocarbons.

“We recently concluded a comprehensive assessment of the overall hydrogen value chain and found that the leveraging the existing global hydrocarbon infrastructure and transport network is the most practical way to jump start a global hydrogen market,” he said.

Hydrocarbons transported across the globe can act as hydrogen carriers until long-distance hydrogen transport becomes feasible. Hydrogen is then produced from these hydrocarbons at the target market, with an option to capture CO2 and transport it back for utilization and/or storage using the same transport network.

Questioned on why Saudi Aramco was looking at hydrogen for mobility, Jamal said more than 50% of oil goes into the transport sector globally, making it an important sector for the company.

He concluded by describing Saudi Aramco’s research efforts in converting oil to hydrogen while capturing the CO2 in an efficient and cost-effective manner, and highlighted a novel membrane reformer technology under development at the R&DC in Dhahran.

A First for the Middle East 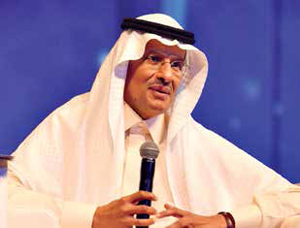 Welcoming hospitality is a famous hallmark of Saudi culture, and at the 24th World Energy Congress, the Kingdom of Saudi Arabia generously hosted the largest stand.

Titled “Saudi Arabia’s Energy Exhibit,” the curved white lines of the 1,400 square meter pavilion formed an elegant composition of understated minimalism, telling a modern story of the country’s sophisticated energy industry, and highlighting the important work being done to transform the Kingdom in a sustainable way.

Later, while being interviewed on stage by RBC Capital Markets managing director Helima Croft, Prince Abdulaziz urged the audience to visit the pavilion’s display of the Kingdom’s new and improved energy mix, saying Saudi Arabia was proud of the energy solutions it was bringing, and the technologies it was deploying. 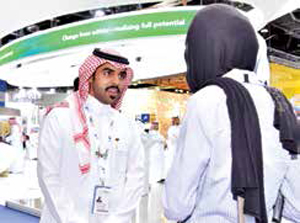 Saudi Aramco participated in an elegant pavilion hosted by the Kingdom of Saudi Arabia at this week’s World Energy Congress, which for the first time in its 95-year history, was held in the Middle East and dominated by an atmosphere of global energy transition. Here, Faisal A. Alissa answers a question from a visitor.

Traveling Exhibits representative Faisal A. Alissa said the pavilion presented the work of more than 27 organizations from the energy sector, including an introduction to some of Saudi Aramco’s diverse initiatives.

“Some of the initiatives presented by Saudi Aramco include its new industry initiatives such as the King Salman Energy Park (SPARK), the International Maritime Industries, iktva, Converge®, flaring minimization, and biodiversity,” he said.