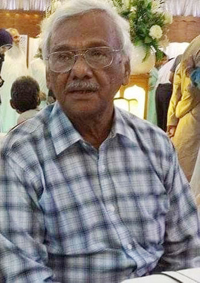 Mr. Ahsan Ahmed completed his Graduation from Karachi University, started his career for Pakistan Industrial Development Corporation, and then switched to State Bank of Pakistan from January 1968 to September 1975.

Joined Saudi Arabian Oil Company in April 1978 in the Engineering Department, Dhahran and later moved to Abqaiq. He left Saudi ARAMCO in June 1986. After returning back to Pakistan, again, he joined State Bank of Pakistan in 1989 and retired in June 2005.

He was well known and a very active member of Saudi Aramco, Dhahran and Abqaiq communities. He was well-liked among his whole family, friends and social community.

May Allah SWT bless his soul with Jannah – Aamen.

My mother (Ahsan’s Ahmed wife) already passed away in May 2010.

Grandsons and daughter and lots of family members, friends.