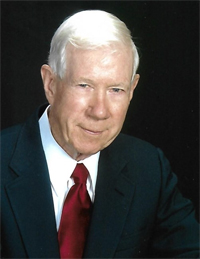 Lee graduated from Crystal City High School in Crystal City, MO and started college at Southwest Texas State Teacher’s College in San Marcos, TX. In a college History class, he met Nola Weiershausen, from Fredericksburg, TX. After a year at San Marcos, he transferred to the Missouri School of Mines and Metallurgy in Rolla, MO., to pursue an engineering degree.

In 1944, he enlisted in the Marines and became a naval aviator. Lee also proposed marriage to Nola, and they were married on March 3, 1944 in CA, prior to Lee’s deployment as a Marine Corsair pilot. Lee served as a Corsair pilot in the Pacific from August, 1944 to July, 1945 in squadron VMF-224. For his performance in the Battle of Okinawa, he was awarded the Distinguished Flying Cross. The Distinguished Flying Cross is the oldest military aviation award, given to those who distinguish themselves in support of operations by heroism or extraordinary achievement while participating in aerial flight.

After the war, Lee completed his degree in Chemical Engineering at the Missouri School of Mines and Metallurgy, where he received numerous academic awards and graduated in chemical engineering as a Phi Kappa Phi. Upon graduation, he joined the Monsanto Company. Lee’s accomplishments as a Chemical Engineer at Monsanto included being awarded a patent in 1956 related to the manufacture of acrylonitrile by catalytic reaction. In 1957, he moved into operations and became a plant manager at the Monsanto plant in Texas City.

In the early 1970s, he left Monsanto to become a project manager for Fluor and Aramco, a joint venture in Saudi Arabia. One of the projects he managed was the Uthmaniyah gas processing plant, which at the time was the world’s largest.

After a brief second marriage, Lee married Lenore Krautter in 1975. Lee and Lenore remained married until her death in 1995. In 1997, Lee married Ann Gisi; they were married until Lee’s death. Lee is survived by his wife, Ann; his first wife, Nola; his children Albert Lee III, James Walter, and Mary Kaye Van Amburg; eight grandchildren and five great-grandchildren. He is preceded in death by his daughter Sharon V. Radford, his brother Bill Van Amburg, his sister Mary Lou O’Rourke, his sister Martha who died at age four; three other siblings who died as infants; and his former wife Lenore.