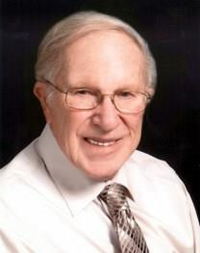 After a long life, well and happily lived, Charles "Chuck" Marshall Riley died April 26, 2017, in hospice care following a stroke. He was born in Chicago, IL, on August 17, 1920, to Fred and Irma ( Kahn) Riley. He received his Bachelor's degree from the University of Chicago, after which he enlisted in the Army Air Corps for service in WW II. His wartime duties were as a weather forecaster in Africa. His military duty concluded in CA, where he met his first wife, Ellen Nadine Jones. Following their marriage, they moved to Minneapolis, MN, where Chuck received his PhD in Geology from the University of Minnesota. From there he moved his family to Lincoln, NE, where he taught geology at the University of Nebraska for several years. While teaching there, he also completed a geology textbook.

In the late 1950's Chuck and Nadine brought their four sons to Houston where Chuck had been hired by Humble Oil Co, now Exxon-Mobil. His nearly thirty years with the company included being on loan to Aramco in Saudi Arabia for three years at the end of his career. While there, he and Nadine traveled extensively during the 30 days they were required to leave the Kingdom each year.

After forty-four years of marriage, Nadine passed away shortly after his retirement. She had been treating cancer for several years. Two years later he married Carol, whom he had met in his church choir. They had been married for twenty-five years at the time of his death.

Chuck had many interests and hobbies, including furniture making, painting watercolors, and oils, Houston Symphony concerts, doing crossword puzzles, volunteering, making signs for Audubon, tutoring for ESL, singing in the church choir for more than fifty years, and being generally helpful as needed. He loved teaching his grandchildren to play chess. His volunteering included a regular Tuesday stint walking the trails at Edith Moore Audubon Sanctuary to clean up the trails and do projects. He assisted his daughter-in-law with science workshops at an elementary school. He stayed active to his last days, walking his dog every day, making trips to the zoo with Carol, and enjoying dining out with friends who often commented on his healthy appetite. Chuck had a positive spirit for life, and his warmth was appreciated and enjoyed by his family, many friends and acquaintances.

Survivors include his wife, Carol Ann, his sons and their wives, Rick and Marilyne Riley, Rusty and Judi Riley, Robin and Gloria Riley, and Roger and Debbie Riley. Chuck's grandchildren include Kellye and Stacy Brown, Sara and John Mallon, Travis and Natalie Riley, Derek Riley, Sean Riley, Christian and Megan Riley, Austin and Eryn Riley, and Ellen and Jonathon Thompson. Great-grandchildren are Emily and Scott Brown, Patrick, Matthew and Will Mallon, Connor and Lillian Riley, Hudson and Charlie Riley, and Spencer Riley. His extended family through Carol include Tracy Swanson, Calvin Heine, Rick and Anne Swanson, and Jacob and Will Swanson. Chuck's beloved dogs, Goggi and Rasccal, also miss their "Papa."

Chuck's memorial service will be held on Saturday, May 20, 2017, at 6 P.M. at First Congregational Church, 10840 Beinhorn Rd., Houston, Texas 77024 with a reception at the church following the service.

In lieu of flowers the family suggests donations in Chuck's memory be made to:
Citizens for Animal Protection, 17555 Katy Freeway, Houston, Texas 77094 or to First Congregational Church Music Fund (Chuck sang in the choir for over 50 years), 10840 Beinhorn Rd., Houston, Texas 77024.