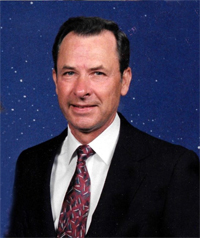 Born in Blair, Nebraska on October 10, 1932, he spent his early years working on the family farm. His professional career began in 1953 in the US Air Force as an aircraft mechanic and instructor. Upon his release from military service in 1956, he began working in the technical training field for a number of companies, including William J. Graham Aviation, RCA and TWA. In 1964, while working for RCA, he took the opportunity to relocate the family from Willingboro, New Jersey to Brevard County, and has considered Merritt Island home ever since. In 1976 he took on the very rewarding and challenging role of Vice President and General Manager of Trans Arabian Technical Services (TATS) in Al Khobar, Saudi Arabia. He was extremely proud of his accomplishments with TATS, overseeing the technical development of local personnel working with ARAMCO, the Saudi Government Railroad Organization, as well as the Saudi Navy. In 1988, Clyde returned to the states to spend more time with his family and finished his career with TW Recreational Services, serving as Director of Technical Services and Procurement at Kennedy Space Center until his retirement in 1995. Since then Clyde spent most of his time pursuing his lifelong passion for fishing and boating, home remodeling projects, and spending time with his ever-growing family. He’s now at peace and together once again with the love of his life.