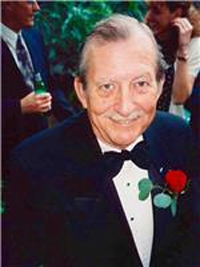 Jake served for more than three decades as an officer with the Central Intelligence Agency, with posts in Amman, Jordan; Beirut, Lebanon; Aleppo and Damascus, Syria; Istanbul, Turkey; and London. A descendant of three generations of American missionaries in Syria and Lebanon, Jake was the first student in the United States to graduate with a degree in Near Eastern studies, part of a pioneering program at Princeton University.

Prior to his government service, Jake worked for the Arabian American Oil Company in Saudi Arabia and taught English at Aleppo College. After his retirement, he was an active member of the Singing Capital Chorus of the DC chapter of the Barbershop Harmony Society, and of the Daytones, a Barbershop Harmony group from several area chapters.

Jake was born in Watertown, NY and served in the United States Army from 1945-1947. After his military service, he attended Princeton University, a member of the sixth generation in his family to have done so, and graduated with the class of 1951. He remained a deeply proud Princetonian all his life.

Although he traveled widely throughout the world for business and pleasure, Jake's favorite place to be was at the family's rustic camp on Long Pond in Willsboro, in the Adirondack mountains.

A memorial gathering will be held on October 14, which would have been his 90th birthday, at a location to be announced soon.