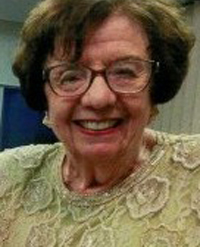 Dorothy B. Steinheimer (Dottie) died on Thursday, November 2, 2017, in Saint Petersburg, Florida at the age of 87.

A memorial service will be held at Blessed Trinity Catholic Church in Saint Petersburg on Wednesday, November 8, 2017.

Dorothy was born in Brooklyn, New York on August 14, 1930. She attended high school in Brooklyn. After graduation, she went to work for the Arabian American Oil Company (Aramco) in New York City. Dorothy had a sense of adventure at a young age so requested a transfer to Saudi Arabia. She went to Saudi Arabia in 1953 as a single young woman and traveled to various places in Europe and Asia on her own. She met her late husband David Steinheimer in Saudi Arabia and they were married on March 10, 1957. Dorothy raised her three children in Saudi Arabia. The family traveled all over the world and when at home enjoyed the beach and boating on weekends. Dorothy loved to swim, water ski and walk the beach. She was an avid reader and also loved to dance.

Dorothy moved to Saint Petersburg, Florida in 1986 when David retired. They continued traveling and boating for many years and enjoyed the company of many of their friends who also retired in the area. Dorothy loved her house on the water in Saint Petersburg.

Dorothy is survived by her three children; Carol, Jane, and Richard Steinheimer.