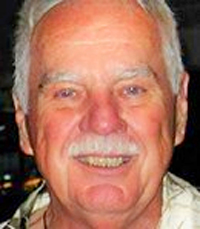 Gene was born May 22, 1931 in Mt. Pleasant, Pennsylvania, son of the late Jennie Maciejewski Misner and stepfather Michael Misner.

Gene was a retired Air Force Major, a Graduate of Golden Gate College, and earned a Master's Degree from The Air Force Institute of Technology. He was a Korean war and Viet Nam war veteran. After retiring from the Air Force in 1971, Gene went on to work for and retire from the Commonwealth of Pennsylvania, ARAMCO in the Kingdom of Saudi Arabia, and also retired from the Commonwealth of Virginia. Gene was an avid golfer and loved to fish and travel. He was a devoted grandfather and loved time with his family.

A Celebration of Gene's life will be held on Wednesday, October 10, 2018, at 8:45am, at the Old Post Chapel, on Joint Base Myer-Henderson Hall. Interment with full military honors will follow at Arlington National Cemetery, Arlington, VA.

Those, who so desire, may make memorial donations in memory of Gene to the Veteran's Administration Medical Center, Lebanon, PA. To inquire about current needs, contact the Voluntary Service Office at 717-228-6123.