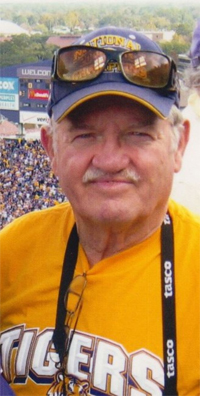 Frank Todd passed away peacefully at St. Patrick Hospital in Lake Charles, Feb 9, 2019 after a brief illness. Frank was born in Center, Texas May 6, 1936 and grew up in Shreveport and graduated from Fair Park High School.

He was preceded in death by his parents Ed and Jo Todd of Shreveport, LA, his wife of 51 years Sue Todd of Moss Bluff, LA, his second son James Todd of Westlake, LA and granddaughter Melinda Todd of Ringgold, LA.

Frank was a machinist by trade and worked in Saudi Arabia for 17 years for Aramco as a Maintenance Supervisor. He was a proud Aramcon Employee and retiree. He enjoyed traveling all over the world while working overseas with his wife Sue. Frank was a member of First United Methodist Church and enjoyed his Sunday school classes. Upon retirement he lived in Moss Bluff, enjoying his retirement, spending his time with family and planning his autumns around LSU football. He was an avid LSU Tigers fan and attended home games with his son James and friends. Visitation will be at Hixson Funeral Home of Moss Bluff at 5pm, Tuesday, Feb 12, 2019 with a service at 6pm. A graveside service will be held at Rocky Springs Baptist Cemetery on Wednesday, Feb 13, 2019 at 2pm. Words of comfort may be shared with the family at www.hixsonfuneralhomes.com.