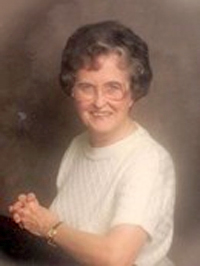 Gertrude Virginia Kriessler of Hayesville, NC, formerly of Brooksville, FL, Fearrington, NC, West Chester, PA and Pompton Lakes and Hoboken, NJ, passed away on April 25, 2019. She was 101 years old. Born in Hoboken in 1918, Virginia was the eldest daughter of police officer James J. and Anna F. (McCluskey) Wren. After graduating from Demarest High School in 1937, she worked as a secretary at The Lipton Tea Co. in Hoboken and as a sales representative at Bergdorf Goodman in NYC. In 1944, Virginia married Navy veteran, Roger J. Kriessler, in Mountain View, NJ. They enjoyed 72 memorable years together. Traveling took them throughout the USA and abroad, including a stint in Saudi Arabia where Roger was employed by Aramco, Inc. Ginny was an avid gardener who was active in many garden and women’s clubs. Her interests also included cooking, sewing, and crafting. Her love of fashion had her working at the Jane Chalfant Shop in West Chester in the 1970’s. Virginia was predeceased by her husband and parents, her sister, Teresa, and nephew, John, as well as, her beloved daughter, Suzanne. She is survived by her daughter and son-in-law, Sharon and Roger Cousins of Hayesville, NC and Palm Harbor, FL, grandson, Brian (wife Mary) Sheller and son-in-law, Richard Sheller, Sr. of West Chester, PA, grandson, Richard Sheller, Jr., and great-grandchildren, Dylan, Michael and Ashley. A Funeral Mass was held at Immaculate Heart of Mary Catholic Church, Hayesville, NC. Interment was at the Florida National Cemetery in Bushnell, FL. Donations may be made in her memory to Catholic Charities.