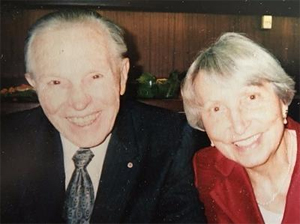 As the only son of Georg M. Lang and Margareta (Herrmann), Henry grew up in Brooklyn, New York. He graduated from Gompers Trade School and attended Brooklyn Polytechnic Institute, where his electrical engineering studies were interrupted by service in the Army during World War II. Henry served with distinction in the European theatre, receiving a combat bronze star while leading as interpreter/recon scout. His bilingual fluency was used not only leading his 100th Infantry 399th Regiment battalion ammunition and pioneer platoon into the German heartland, but also in winning the heart of his newfound love in Pforzheim, Theresia Antonie Lang (Rehm). After waiting for three years for military permission, Henry and Terry were married in Heppenheim's Catholic Church in 1948, and left on steamboat back to the States.

Upon return, he completed his studies. His profession led both Terry and Henry adventurously around the world, starting with TVA, Kaiser Permanente in San Francisco, Calif.; the Army Corp of Engineers in Alaska and Italy; Aramco in Saudi Arabia; Chugach Electric, MBA Consulting Engineers, Polar Consult and Lang Consulting. Henry was a founding member of Alaska IEEE and recipient of their Small Business of the Year award. He finished his career as a forensic consultant, drawing on three decades with the Corp.

Having driven up the Alcan to start their Alaskan life in 1953, they quickly fell in love with the raw nature. On the weekends they religiously drove down to Girdwood to build a cabin, and develop what is now Alyeska Resort with Joe Danish, Ernie Bauman, Sven Johanson and others.

Henry was particularly passionate about sustainable energy possibilities of the Susitna Hydro Project, having advocated for balanced sustainable resource development so critical to the future lifeblood of Alaska.

All are welcomed to attend a funeral mass at Holy Family Cathedral at 1 p.m. on Wednesday, July 19, 2017. Henry will be buried at Joint Base Elmendorf-Richardson National Military Cemetery with full military honors. A celebration of life ceremony will be announced later.