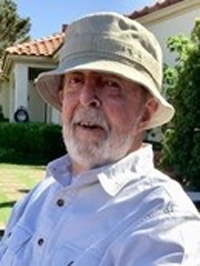 James "Jim" E. Strandine grew up in San Marino, CA, the only son of the late Edward and Melva Strandine. He attended San Marino city schools, winning the CIF 100-yard backstroke championship. An avid surfer, he was filmed surfing as James Darren's substitute in the movie "Gidgit". Jim spent much of his US Marine Corps enlistment on Okinawa, which started a lifetime of international travel. He received a bachelor's degree from Texas Christian University and a Master's in International Management from Thunderbird School of Global Management.

Jim married Linell Ann Gaus, a TCU classmate, in a small family wedding in Hawaii. They enjoyed a wonderful life of living and traveling abroad until their amicable divorce. Following in his father's footsteps, Jim worked for IBM Corporation, first in Dallas, Texas and was quickly promoted to their Vietnam operations supporting the U.S. Military Assistance Command war efforts in Saigon. The challenges of working overseas, and in a war zone, developed his international management interests and skills, plus gave him R&R travel time.

In Texas, Jim played on a world-class, six-man volleyball team and continued playing volleyball throughout much of his life. While working in Saudi Arabia, he sailed a two-man Hobie Cat catamaran. With two successive partners, he was the tournament champion several years in a row.

Jim accepted a position in Brussels, Belgium with a US medical supply company, traveling the world setting up their international distributorship. California Institute of Technology hired him as a consultant advising them on a grant to supply equipment to a university in India. On to Valdez, Alaska, he managed the Fluor Corporation's Trans-Alaska pipeline payroll. Jim joked that he froze during that assignment, so went to Saudi Arabia next to thaw out. Working for Aramco (now the Saudi Arabian Oil Company) he managed their multimillion-dollar offshore oil rig contracts, during major corporate growth, transition to Saudi government ownership, and the Iran-Iraq war. Using the company's generous vacation time, he had so many stories to tell of his extensive travels.

After trying to settle into early retirement in South Carolina, Jim reconnected with a high school surfing buddy in construction in California. They formed a business constructing new cell phone towers in Los Angeles and later in Las Vegas. As the cell tower business declined, Jim and long-time friend, Diane Medina, moved to Summerlin, NV near Las Vegas. Finally fully retired, they had another decade together in Las Vegas until her untimely death. At that time Shirley O'Neil had recently lost her husband. She and Jim became partners until Jim died suddenly of a burst aortic aneurysm at Summerlin Hospital Medical Center.

An easy going, honest, and gentle man, well liked by all who met him, Jim is already greatly missed. He did not desire a funeral ceremony.