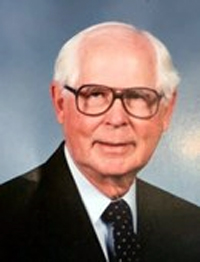 Long time Bay Area resident John L. McBride passed away June 15, 2017 eight months shy of his 100th birthday. He lived a long and fully engaged life - having sailed the South Seas as an eighteen year old sea scout in 1936, serving as a flight instructor in the Army Air Corps during World War II, working briefly for ARAMCO and United Airlines before embarking on a 31 year career at the East Bay Municipal Utility District in Oakland. At EBMUD he managed new business development for the district during the post war building expansion in the East Bay. He raised three children-a son and two daughters-with his wife Betty Ann in Lafayette, their home for forty-five years. John took early retirement from EBMUD in 1980 following a heart attack and coronary bi-pass. He resolved to make the most of these years. His key to a happy retirement was day-to-day planning. "Don't sit around doing nothing" was his admonition. He was true to his words. He and Betty enjoyed sailing on San Francisco Bay, traveling, participating in civic events in Lafayette, as well as delivering food for homebound seniors through Meals on Wheels.

Sadly, Betty passed away in 1993, shortly after they celebrated their 50th wedding anniversary. John moved to Benicia in 1997.

John was civic minded in the best sense- a long time member of the East Oakland Rotary Club and numerous government and neighborhood associations-he never shied away from involving himself in activities that promoted the general welfare. Well into his nineties he acted as a good will ambassador on the behalf of the City of Benicia to its sister city of Tula, Hidalgo, Mexico- travelling to Mexico to participate in festivities honoring that relationship.

He kept moving through his thirty-seven year retirement. He rode his bicycle everyday until his early nineties when his doctor recommended walking as a safer mode of exercise. He kept up with technology. He learned to program a VCR. He had a personal computer and used the Internet. The old pilot was driving his 2002 Ford Taurus until three weeks before his passing. He was well read, an inveterate tinkerer and avid cook. His daughter Marsha, a well-known Bay Area chef, credits him with her early interest in the culinary arts.

John survived two coronary bi-pass operations. He opined that it took a lot of good luck to live nearly a century. Left unsaid was that his optimism about the possibilities presented with each new day contributed as much to his remarkable longevity. He faced death as he lived his life: with dignity, courage and old-fashioned Protestant restraint. He was loved and will be missed.

His first son, John Marshall McBride, his wife of fifty years, Betty Ann and his oldest daughter, Leslie Ann, predeceased John. He is survived by his son Robert and daughter Marsha, daughter-in-law Tina Mollis, son-in-law Brian Johnson, granddaughters Marcela Estrop, Eva Johnson and Chloe Mollis-McBride, great grandson Santiago Romero and long time companion Maria Harrington. Per his request there will be no funeral. Donations in his memory can be made to Doctors Without Borders.